​We are very sorry to report the death of Jo Iddles at home on Wednesday, 31st January 2018.  Jo was a real tennis professional and was one of the top lady players in the first decade of this century having won two World Championship Doubles titles as well as being the losing World Championship Singles finalist in 2005.  She was also a fine lawn tennis player and coach.

Jo's funeral will be at 1.00 pm on Wednesday, 7th March 2018 at Cheltenham Crematorium. 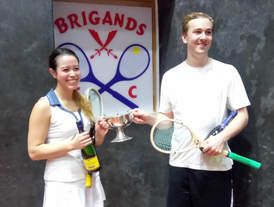 The LRTA team of Izzy Hunt and Chris Davies winners of the tournament. Photo Owen Saunders


​Another win for the LRTA team thanks to Evie Fleming's friend Chris Davies teaming up with Izzy Hunt as Evie was injured. 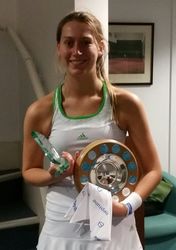 It is with great sadness that we heard of the death of Lottie Fullerton in a landslide in Nepal. Lottie was the winner of the 2015 Girls Under 21 Handicap Singles and was a member of the current LRTA Development squad.  We send our heartfelt condolences to her family and friends.

Lottie's funeral will be held at St. Anne's Church, Kew Green, London at 13.45 on Monday, September 11th, 2017 and it will be followed by tea at the Nash Conservatory in Kew Gardens.  The Fullerton family would love to see as many as possible of Lottie's friends on that day, so please pass on these details to anyone you think will want to come.  The family has not yet said what they would prefer to be done about flowers but this information will be published here when it is known.  The dress code for the funeral will be casual and the family has said that those coming should wear whatever they find comfortable.

It would be appreciated if you will let Maggie Henderson-Tew know via email (maggie.ht@btinternet.com) if you are intending to go to the funeral, as it will enable her to give Mrs Fullerton a rough idea of numbers.  ​

Click here for the report of the ​2015 Girls Under 21 Handicap Singles.