(The Match Results pages for previous years can be found now via the appropriate Archive pages.)

All the match results are held on this page in date order, so please scroll down to find results of earlier matches.
​

​In the first match, Anthony and Foreman forced their way effectively to take the first set 6 – 2.  In the second set Penny and Alex finally got their eye in and went 4 – 1 up but steadily the boys crept back and it was 5 – 5.  Penny and Alex hitting some very accurate shots took the set 6 - 5 and went on to romp through the third set 6 – 3 to win the match.

The match between Tara and Jess was stunning and a pleasure to watch.  Both Tara and Jess are fabulously quick about the court picking up many potentially chase 3 and better shots.  Although Tara won the first set 6 – 2 the set was much closer than the score suggests.  The second set was a very close affair until 4 – 4 when Tara served well to take the set and the match.  If anything Tara was just a smidgen more accurate and noticeably good at hitting the ball off the tambour.

In the third match, the score certainly didn’t reflect the closeness of the game.  Whatever shot Sarah hit Nick was always quickly there and frequently hitting back with interest.  Sarah’s accuracy wasn’t quite up to its usual high standard and she was so unfortunate with the number of shots that just nicked the tambour, if they had missed it they would have slithered past for a winner.

The girls won the first set 6 – 2 in the fourth match with beautiful volleying by Claire and excellent retrieving by Georgie.  Michael and Anthony then cut out the mistakes and played with greater accuracy to take the second set 6 – 2.  The standard of play went up a level again and with further sharp volleying by Claire and some terrific defending of the dedans by Georgie the girls took the final set 6 – 4.
​
Finally, Nicola and Irina went 1 – 3 down but then produced some good serving and lovely volleying to take the first set.  It was then the boys turn to serve well forcing the girls to make mistakes off the return of serve.  In the final set Marek and Henry were more accurate and took the set 6 – 4.

All matches were played level, one deuce and then 40 all.
The first match - between two very evenly matched pairs, Lucy Davies and Peter Jones v  Angela Probyn and Chris Willows - was very entertaining and played with great good humour. The first set was level pegging until three all. Then some excellent serving from Lucy and good volleying from Peter saw them run out at 6/4.  In the second set Angela and Chris upped their game and were much faster about the court to win the set 6/4.  Much depended on positioning, anticipation and mobility from all four players!!
The final set went to Angela and Chris 6/3: all looking rather weary!

Charlotte Barker dominated her game against Hannah Lucey winning 6/1,6/1, with a good serve, short back swing and faster about the court . Here experience told. Full marks to Hannah for great concentration, some good serving and battling to the end. She has played very little since coming to Bristol University and will improve greatly if she is able to play more.

Janet Peach from Oxford says she never plays singles and looked somewhat breathless;  but with more experience won 6/3, 6/1, beating Susie Wessely who has only been playing for six months  and did well to hold her own.

The last match was Georgie Willis against Tim Armstrong: very closely fought with some excellent tennis .
Georgie took the first set 6/1, despite some long rests. Tim however came back in the second and played more consistently, serving good railroads and keeping the ball low. It was five all, and it looked as though Georgie was going to take the match, with a match point !. It was not to be and Tim took it 6/5. Set all!
Starting at three all in the final set both players looking tired, Tim made several unforced errors, and Georgie took it 6/3.
A great match thoroughly enjoyed by all spectators.

A big thank you to Angela for organising both sides and providing a delicious lunch; to Kevin for his excellent  marking despite feeling unwell and BRTC for hosting the match.
Report by Sheila Macintosh 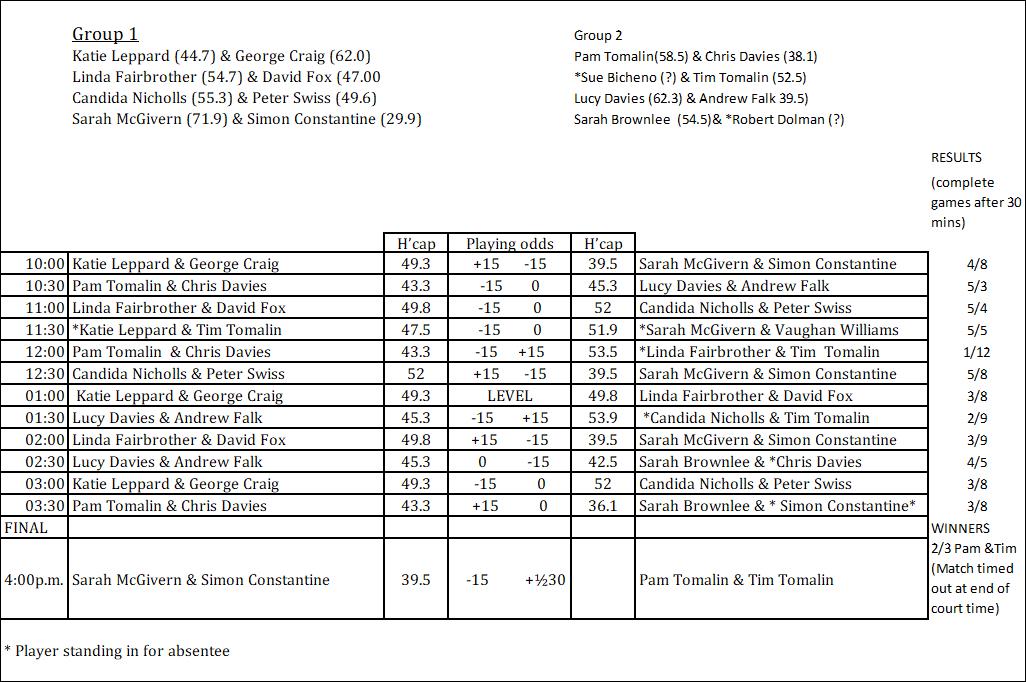 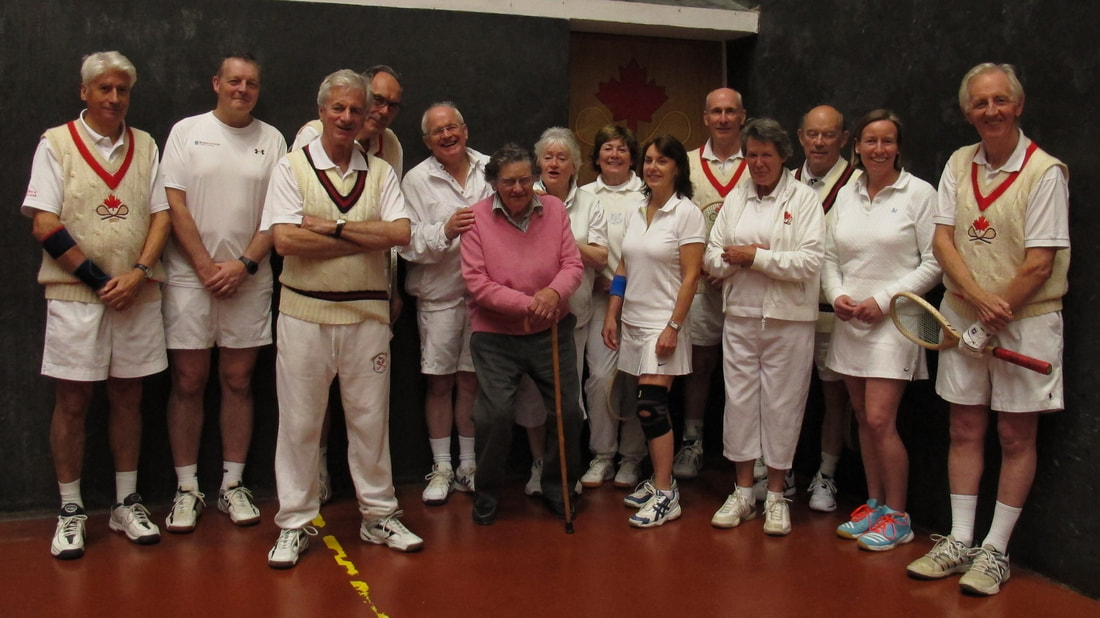 The players with the organiser Sheila Macintosh Photo Linda Fairbrother
Most of the usual suspects gathered at Hardwick for the annual mixed doubles held to show our Gentlemen members the high esteem in which we hold them.   The main no-show Gentleman was Boodle the dog – banished to Lucy Davies’ car, in case of an un-gentlemanly attack on the pristine sofas and paintwork of the newly-refurbished Hardwick dedans and interior.

We were particularly honoured by the presence of the T & RA Chief Executive Chris Davies, unfazed by being one of a large group of players who, at one point or another during the day, masqueraded as someone else.

Two groups of four pairs were organised, with the usual last-minute necessities of re-vamping the pairings to fit in difficult timings and absentee players.  This year, Tim Tomalin had the wooden spoon of being the male who partnered a smorgasbord of females – except that it turned out to be a silver spoon.  Three different partners helped him to the Final play-off against Simon Constantine and Sarah McGivern, who had won their group.   Tim – finally partnered by his true love Pam – engaged in a match against the clock, with literally just a few minutes left before the court had to be handed over to the next booked players.  With great cunning, Tim and Pam brought out their best shots with the score at 2 games all, to just scrape the final point of the fifth game as the arriving players walked through the door.  So in the end, monogamy won the day: 3/2 to the Tomalins.

The usual warm hospitality and delicious lunch was enjoyed by all, with some excellent tennis as the bonus.  Our special thanks to Pam T. and Lucy Davies who saved the – digital – day, by taking over Sheila’s cyber-communications when her technology failed her.   Also thanks to the Hardwick committee for letting us use the court, to Pam and Lucy for the food and Candida for the drinks.  And of course to Sheila herself for organising the whole enjoyable day.
Linda Fairbrother