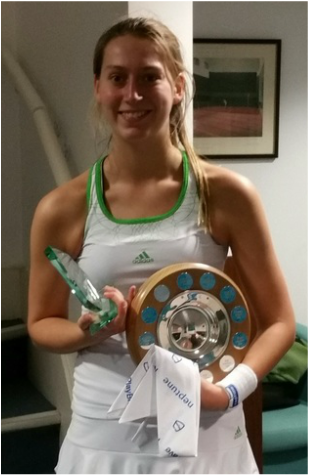 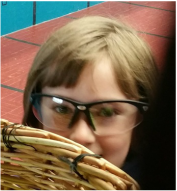 
​What an exciting tournament this turned out to be with some of the previous competitors returning and showing how much they have improved along with several new entrants playing with considerable talent.  Originally the tournament had 21 entrants but with a few withdrawals we were down to 16 who initially played in groups then with the top 2 players in each group progressing through to the Knock Out stages. 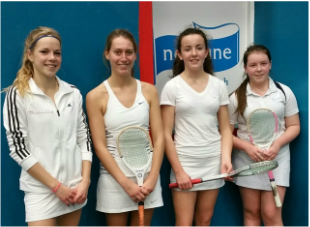 Group A Players
​Group A:  Stephanie Zaaijer, Anna Willis, Lottie Fullerton and Hannah Lucey.  What a strong group this turned out to be.  Stephanie had travelled over from Holland to play and is a recent convert from lawn tennis where she has a 2 rating!  The very first match went to the wire with Stephanie v Anna.  Both girls played very consistently, placing the ball well and resisted the temptation to slug their shots with Stephanie winning 6-5. Anna then stayed on court to take on Lottie which turned out to be another close encounter with both the girls placing the ball well.  Anna served well and hit some very attacking shots to the base of the tambour but Lottie swung the ball deftly from side to side and edged out the winner 6-5.  In the next match Hannah the 2014 holder played against Stephanie.  Stephanie raced to a 5-1 lead with some super railroad serves and volleys.  Hannah crept back to 3-5 by hitting a better length and cutting out the mistakes only for Stephanie to exert some pressure again and take the set 6-3.  Hannah v Lottie was an extremely close match going game for game until 4-4.  Hannah played some good attacking drives but Lottie’s ability to move her opponent from one side of the court to the other gained her the extra points and the set 6-4.  With 2 wins each Lottie v Stephanie would provide the winner and runner-up of the group.  Lottie hit shots with great width and Stephanie served some excellent railroads only learnt 2 days before!  Stephanie led 5-3 but in spite of her good length serves and drives Lottie dug them out from the back wall and clinched the set 6-5.  The final group match was Hannah v Anna.  The 6-2 win to Anna did not reflect the closeness of the game.  Anna was just a little steadier on this occasion.

Group B Players
​Group B:  Rachael Griffith, Jessica Medlow, Harriet Harries-Jones, Olivia Boulton and Katie Walker.  First up in this group was Rachael v Jessica. Jessica’s good volleying and quick footwork helped her to a well-deserved 6-2 win. Rachael’s serve was much more effective in her next match against Olivia and this contest went game for game with Olivia rallying energetically but Rachael hit some very affective cross court forehands to tip the balance and win 6-5.  Special mention should be made of Katie our youngest competitor at 9yrs 4 months. She was unperturbed by playing much older players and ran to pick the balls up in between points.  She clearly has a good eye for the ball and great speed about the court. Harriet and Jessica had won all their games convincingly so their match would decide who would win and be runner – up of the group. This was a great game with both players hitting some terrific shots off each other’s good shots with Harriet winning 6-5. 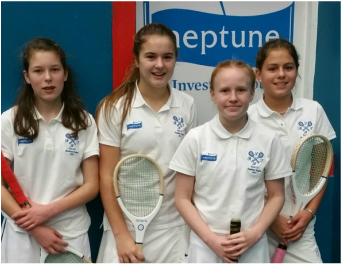 Group C Players
​
Group C:  Isolde Taylor, Marina Eastwood, India Deakin, Molly Rogers. First match on court was Isolde against school friend Marina who is completely new to the game. Isolde quickly went 1-3 down but then started serving better, kept the serving end and went to a 5-3 lead. Then Marina managed to get to the serving end and stamped her authority on the game with her good serves and strong volleys to reach 4-5 and 40 all but for Isolde to snatch victory away with an excellent cross court forehand. India v Molly – this was a tough first match for Molly, with India hitting fantastic forehand drives and volleying well.  Molly kept calm and hit the ball well when given the opportunity and India won 6-1. India then played Isolde. The match went game for game until 3-3 with both players quick about the court and retrieving well.  Then India got to the serving end and produced some really good serves to take the set 6-3. Molly played more confidently in her match against Marina and served well throughout but still ran out the loser 6-2.  Marina v India was another strong match. Both girls although inexperienced players have good timing, half volleyed and volleyed well and both had naturally good footwork and could place the ball. In the end Marina was the winner 6-3. With Marina, Isolde and India all with 2 wins, Marina won the group with more games for and India was runner-up with 1 fewer games against than Isolde. 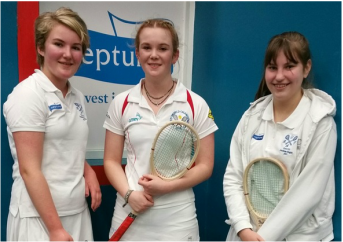 Group D Players
​
Group D:  Georgie Willis, Amy Pye and Felicity Sargent playing an 8-game set.  It was always going to be a tough match with Georgie giving away 12 points to Amy. It was a close game until 4-3 to Amy with both girls serving effectively and producing attacking cross court forehands drives. Then Amy edged away to win 8-3 with even tighter serves and some great retrieving off Georgie’s almost winners.  A much tighter game than the score reflects. Amy then played Felicity which was a good match with both players hitting strong ground strokes. Amy moved to a 6-3 lead then Felicity played much more confidently to reach 5-6. Amy then sneaked the next game, Felicity clawed another back and saved 2 match points only to have Amy hit 2 nick serves and take the set 8-6.  In the final group match Felicity raced to a 5-2 lead v Georgie who served well but Felicity constantly dug Georgie’s good serves out of the nick.  Georgie manage to save 5 match points to make it 3-7 but Felicity attacked again to take the set 8-3. 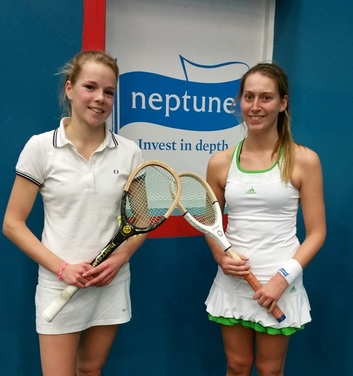 Before the Final
​Knock out stages:  The first quarter-final was between India v Harriet. This was a much closer game than the score reflected of India winning 6-2. India moved about the court very quickly and was keen to take the ball early on the floor. Harriet volleyed well but as the game ran away from her she began to make unforced errors.
Marina then played Jessica giving her 10 points.  Jessica timed the ball well and served to a good length racing to a 5-1 lead. Marina eventually reached the service end and then won 9 points on the trot to make it 3-5. However, a slightly weaker serve allowed Jessica back to the service end and again with good serves she took the next game and the set.
Next up was Lottie v Felicity. This match went game for game until 4-4.  Felicity was giving away 11 handicap points and played some of her best tennis of the day.  Both girls hit shots to a good length and width with the quality of play going higher and higher as the set progressed. Two long games finished with Lottie hitting a nick serve to take the set 6-4.
The last quarter-final match was between Amy and Stephanie.  Stephanie had a wobbly start and was soon 2-0 down.  However, with some excellent volleying and accurate ground strokes she was back at 2-2.  Amy went 40 love down in the next game but then produced some outstanding drives to pull back to 40 all only to forget to move her feet on the return of serve and bury it into the net. Stephanie began to control the game with great width shots and soon reached 5-2.  Amy continued attacking and sneaked a game back but Stephanie was resilient to Amy’s salvos and sent them back to go on and win 6-3.
​Both semi-finals were nail biting affairs. India v Lottie.  India raced to a 5-0 lead playing beautifully and improving with every game that she played.  Lottie was giving away 11 handicap points and uncharacteristically made lots of unforced errors. Suddenly Lottie started playing better having been encouraged at stopping what was going to be a dead cert winner into the dedans, by volleying it back into the winning gallery. Now it was India who lost her rhythm and started making mistakes and we were at 5-5. Lottie continued to hit balls with great width and finally took the set 6-5.
Stephanie and Jessica went on next with Stephanie giving 25 points away! Jessica continued to move about the court well and took her racket back nice and early to cope with Stephanie’s weighty shots. With some good back wall nicks Jessica was soon leading 3-0. Stephanie looked unsettled at first giving so many points away each game but she kept calm and steadily played herself in to lead 5-3.  But four unforced errors saw her at 5-5. She regained her steadiness and took the final game and the set 6-5.  If both the winning semi-finalists are to be congratulated by coping with giving so many handicap points away and still win, the losing semi-finalists, India and Jessica, are also to be congratulated on keeping calm when seeing their big leads evaporate. 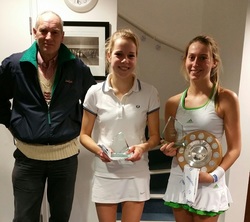 Mick Dean with the Finalists
​So to the final, an 8 game set. Stephanie played off 60 and Lottie off 69 and what a magnificent tussle this became.  Both players have loads of talent, with good footwork, able to hit the ball with control and retrieve well.  It went game for game to start with then Stephanie pulled away to a 5-2 lead with some glorious backhand volleys and cross court backhands to the base of the tambour.  Then Lottie clawed her way back with good use of the galleries enabling her to get back to the service end. The standard of play continued to rise and eventually the score was 7-5 to Lottie who then had several match points. Stephanie dug deep with very accurate serves and her backhand cross court drive again winning points to win that game and the next.  So 7-7 with Stephanie receiving.  She immediately hits 2 chases to take the service end and one thinks to take command but Lottie returned the serves well and played out the rallies accurately, always hitting with good width and not tempted to over hit and so take the final game and set 8-7.  What a tremendous match this was to watch with both players playing with maturity and at a far better level than their given handicap. 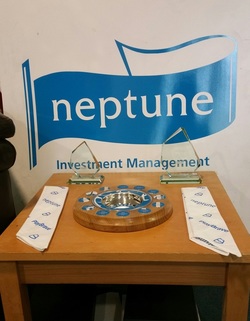 Our grateful thanks go to our sponsors Neptune Investment Management.  In addition, our thanks to Chris Ronaldson for his help prior to the tournament, Mark and Zac Eadle for their marking and support throughout the weekend and Mick Dean for presenting the prizes.  Finally, our thanks to Radley College for allowing the tournament to be held on their court.
Return to top of page