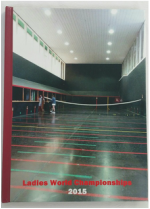 This book, produced by Jeanette Guardia as a memento of the event, is a wonderful photographic record of the 2015 World Championships.  You may be familiar with the similar book Jeanette published recording the World Championships held in Paris in 2013.  If so, you will know the quality of both the photos and the book itself.  Jeanette has kindly donated copies of both the 2013 and 2015 books to the LRTA for our records.  Our thanks to Jeanette for producing it.  Jeanette is offering copies of the book for sale.  If you would like to order a copy, click here to go to an order form.  Orders must be received by 31st January 2016.

Please note that this tournament will now be held in Paris the weekend of 28th to 30th May 2016, not as shown in the LRTA Blue Book as Fontainebleau the weekend 23rd to 25th May 2016.  Click here for photos and a report re the 2015 tournament.

This tournament will be held at Radley College on 28th-29th November 2015. More information is available on the Entry Form page.  A printable pdf of the Entry form can be downloaded by clicking here.  Please remember that entrants under 18 must submit a consent form before their entry can be accepted.

We are very pleased to announce that Carter Jonas, Estate Agents, are sponsoring the LRTA.  The High/Low Handicap Doubles tournament, being held at Leamington on 12th/13th September 2015, will be their first supported event.  More information about their company is available on their website:  http://www.carterjonas.co.uk/” 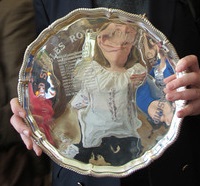 A really enjoyable week of tennis, with some great matches, culminating in great finals  -  click here for full results and here for first photos.   (The report and more photos now available.)
The Handicap Doubles Final was played on Saturday 18th April, 2015 and was won by Lucy Hutchinson and Isabel Candy beating Clare Bucknell and Isabel Hunt 8/3.
On Sunday, 19th April, 2015, the first match on court was the Singles Plate Final between Isabel Hunt and Saskia Bollerman from Holland.  A tight first set went right to the wire, finally being taken by Saskia.  This proved to be key as Saskia went on to win 6/5 6/1.
The Singles Final proved the standard of ladies' tennis has reached new heights.  Sarah Vigrass started off really well and there was a buzz  -  would there be an upset?  But although Sarah took three games early in the first set, Claire Fahey came back strongly and won 6/3 6/1.
The Doubles Final was a "family" affair between Claire and Sarah and Penny and Tara Lumley.  As so often happens, the score of 6/0 6/0 to the sisters did not reflect how close some of the games were with lots of deuces and the Lumleys having game points which they just could not convert.

We were particularly honoured that HRH the Earl of Wessex attended the Finals, joined us for lunch and presented the prizes.

A great week enjoyed by all who took part whether playing, supporting or organising.

Congratulations to Claire Fahey who was a finalist in the Singles tournament, losing to Conor Medlow 2/6 4/6.  A good result for Claire as the difference in their handicaps meant that the result featured as a draw on RTO.  Claire and her partner Lewis Williams also got through to the final of the Doubles where they lost to Conor Medlow and Ben Boddington 3/6 0/6.

Irina Dulbish also played but lost in three sets in the first round to Nico Merola but got through to the semi-finals of the Doubles with Leon Smart where they lost to Conor and Ben 2/6 5/6.  An excellent result as the difference in handicaps was too great for the result to affect their handicaps on RTO.

Prue McCahey and Harriet Ingham
Congratulations to Harriet Ingham who has won both the Singles and Doubles in the Australian Open.  These are Harriet's first Open wins and come immediately after her achieving her first listing in the World Rankings at number 9.  In the Singles semi-finals, Harriet beat Euahna Varigos 6/0 6/0 and Prue McCahey bt Rose Snell 6/0 6/1.  In the final Harriet beat Prue 6/4 3/6 6/4.  In the Doubles Harriet played with Jo Edwards and they beat Prue McCahey and Rose Snell 6/4 4/6 6/2.

Harriet is a past LRTA bursary girl and is currently participating in the LRTA Incentive scheme.

Plans for the Ladies World Championships 2015 are progressing apace.  The entry form is now available so get your entry in without delay.  If you feel entering the main Singles and Doubles tournaments is a bit too ambitious for you, why not enter the Handicap Doubles and thus be able to get some tennis, watch some first class ladies tennis, enjoy the social events and be part of all the excitement.

Click on the picture to go to the online entry form and to access a printable version.

A win for Cambridge, 4 matches to 2.  Maggie Henderson-Tew of Oxford says "We have had a good run, but Cambridge were too strong for us this year."  Click here to read the match report.

This tournament is being held earlier next year so although you are going to be busy over the next couple of weeks, please don't forget to get your entry form in before the closing date of 23rd January 2015

Claire, whose handicap is 2.8, an all time low for a lady player, has been accepted as a competitor in The British Open to be held at the Queen's Club from 16th to 24th November 2014.

Claire's first match against Mark Mathias is at 14.00 on Sunday 16th November.

New edition of the Neptune Book of Tennis and Rackets

Click here for information about the new edition of the Neptune Book of Tennis and Rackets.  As well as covering all the active  courts worldwide, it includes a section on the ladies’ game.  If you would like to order a copy, details of how to do so are in the document.

The Tennis and Rackets Association is to hold a review to consider it approach to ladies participation in Open events at all levels.  Click here for more information.

Update re the Dedanists' Foundation

The 2014 AGM of the Dedanists' Foundation was held on Tuesday 11th November 2014.  Click here to see the Annual Report and Accounts.

The World Rankings have been updated early this month.  Congratulations to Claire Fahey whose handicap is down at 3.9 having reached an all time low handicap for a lady of 2.4 during the month.

Click here for the LRTA v Hardwick match results. The match was played at Hardwick on Saturday 22nd November 2014 and the LRTA won 3-2.

The Neptune Under 21 Girls Handicap Singles 2014 tournament took place at the Radley Tennis Court on 29th and 30th November and was won by Hannah Lucey.
Click here to see the results, report and photos.

Click on the picture for the report, photos and results of this tournament which is open to all ladies whether or not they are members of the LRTA.

A triumph for the youngsters this year against their more experienced competitors.

The 2014 Ladies United States Open will be held at The Tuxedo Club from the 7th - 9th November 2014. Click here for a printable application form.
Overseas players do not have to be a member of the USCTA to enter.

Click on the logo for the results and a photo for this annual tournament.

Click here or on the logo to see the French Open results and photos. 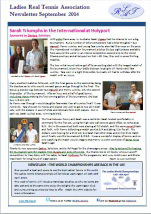 The September 2014 mailer is now being posted and you should receive your copy by the 2nd week of September. If you do not or you have any queries about the contents, please contact us and we will reply as quickly as possible.

An electronic copy of the newsletter is also available for viewing by logging in to the Members Area.

​​The entry form is now available for this tournament.  Entries are limited to a maximum of 16 and will be accepted on a "first come, first served" basis, so get your entry in quickly if you want to play.

The ladies events will run alongside the Men's competition. The Ladies Open (Singles and Doubles) will actually commence on Thursday, 25th September with the finals on Sunday, 28th September.  The closing date is Thursday, 4th September so don't miss out and get your entry in.  Click here to download a printable entry form.

Click on the picture for the results of this match which the LRTA won 5-4.

Another great weekend hosted by Seacourt with some excellent tennis and lovely weather.  Fiona and Tony Harrison were worthy winners for the second year in a row beating Irina Dulblish and Mark Gillespie in the final.

Click on the picture to go to the results, report and photos and on this link to see a video of the final:   http://youtu.be/oFaGHKYNHoc

Click on the picture for the Report and photos of this popular event.