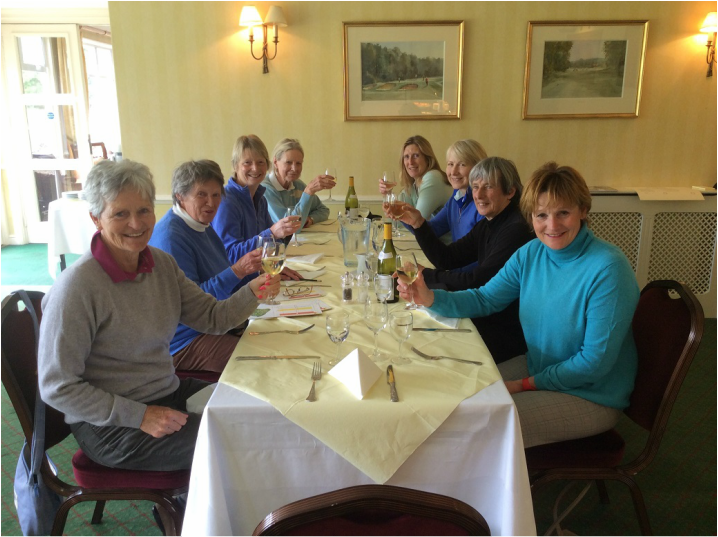 Always a fun and challenging day, we started with a first to 6 game set round robin handicap doubles competition.  Closely fought by all, Lucy Davies playing with Kate Rowe maintained steady and consistent play throughout.  Kate’s accurate volleying and Lucy’s ability to return everything proved very difficult to beat.  Sarah Brownlee played with Caroline Harding, Caroline’s serve appeared to be unassuming, but often had devastating results, with numerous nicks and aces.  Carolyn Armstrong-Smith played with Anne Balcerkiewicz.  Some brilliant shots mixed with some less impressive unforced errors and our fourth pair were Di Wallace and Jane Burridge whose game visibly improved after each match as they became used to their new partnership.

Despite being unable to hear the score on occasion due to the torrential rain showers crashing onto the Harwick court roof, the tournament winners were Kate and Lucy who won all their matches closely followed by Carolyn and Anne.

Moving on to the golf tournament…, after an excellent lunch during which we were joined by a visit from Sheila Macintosh, after considerable deliberation over the extreme weather conditions, we intrepid players decided to brave the elements.  We played 18 hole Stableford on full handicap and despite the challenging conditions where, on occasion, one questioned if the ball was being blown backwards as fast as we were trying to hit forwards, plus the odd downpour, we all managed to complete the course.  Probably the beauty of the newly leafed beech trees with the stunning blue sea of bluebells throughout the course spurred us on.

The winner was Kate, playing off a handicap of 11.  An impressive win with 32 points taking into account that it was the first time she had played the course and the playing conditions.  In second place was Sarah, playing of a handicap of 18 with a score of 28 points.

A wonderful day was had by all and a very big thank you to our organiser Lucy Davies, for not only putting on a great show, setting up two tournaments in two sports in one day, but also offering dinner and a bed to three of us in her lovely home.