​​Most of the group matches proved to be close with only the winners in two of them winning all their matches.  It was so good to see new faces this year with all the winners and runner-up being new pairings except for Geoff & Doris Oldland and Jess Garside & Simon Flynn, with 16 pairs that is very good going and brings new faces to the tournament.  The last group proved very tight with the Harrisons, past winners and always having got through their group other years, being placed in 3rd position, although they won more games than Sian Medlow & William Flynn they only won one match against the other winning two matches.  This group eventually proved to be very strong as both the finalists came from it. 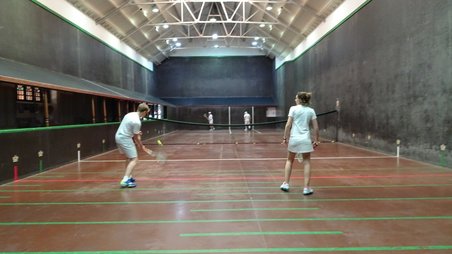 The Final
​​The first quarter final saw Candida Nicholls & Peter Mawson take the first 3 games, looking very strong, and then Candida did a double fault which distracted her and let Geoff & Doris Oldland in to the match. They then went on to win the next 6 games and win through to the semi -final. The second match saw Alex Garside & Geoffrey Russell, the lowest handicap pair in the tournament come up against our youngest pair of Sian Medlow & William Flynn.  Sian & William proved too strong and positive for Alex & Geoffrey, particularly as they were receiving quite a large handicap, after losing the first game they went on to win the match 6-1.  The 3rd quarter final was between a new pairing of Izzy Candy & Peter Mather from Hampton Court and home pair of Jess Garside & Simon Flynn.  This match proved to be the closest one of the quarters with games being won by each pair up to 4-4 when Jess & Simon went ahead to take the match 6-4. The last match of the quarters was between Hardwick pair of Katie Leppard & Tim Tomalin and Petworth pair of Carolyn Armstrong-Smith & David Fortune.  Katie and Tim proved too strong and won the match 6-1 to be the 4th pair in the semi’s.
​​The semi’s were almost an all Seacourt affair with the Oldlands playing Sian & William in the first match and Jess and Simon in the 2nd one, in fact we did wonder if we could have had a family final with William and Simon against one another but Katie and Tim put paid to that. In the first match with William playing such classic shots and Sian defending the galleries, they certainly proved too strong for Doris & Geoff winning very quickly 6-0.  In the second semi games went along fairly even until at 3-3 Katie really got her serve going and Tim played some super shots to take the match 6-3.
The final was a really good match but the youngsters proved too good, improving with each shot played, went to 7-1 before Katie & Tim finally got a couple more games and we all wondered if they would pull back to take the title but Sian & William quickly shut them out and won 8-3 to be the youngest pair to win the LRTA Mixed Handicap Doubles and prove to be a pairing to watch.
​

Our thanks must go to Aaron (proving he is able to be in the Head Pro position but I think he will be glad when Nino gets back!!) and Chris who marked all the matches, kept to time, and were cheerful  all the weekend.  Thanks also to Alex and Viv for organizing the tournament, to Lucy for buying the prizes, vouchers for the organizers and gifts for the pro’s also selling so much LRTA clothing and the staff at Seacourt but our special thanks must go to Addison Law, Chris Halliwell, our sponsor, who very generously provided Pimm’s and canapes before the dinner on the Saturday evening.  He was then at the club all day Sunday to watch the matches and present the trophies to the winners.