​Once again a good weekend was held on Hayling. This year saw several new pairs, Liz Leach & Chris Lintott, Clare Bucknell & Miles Jackson,  Katy & Giles Doy along with new faces Tom Dipple, Peter Crerar and the very well known face of Alan Lovell who was playing a Mixed Doubles for the first time and Aaron Flippence who quickly earned the name of bandit as he just improved so much with each match, Caroline certainly knew what she was doing when she paired up with him. It was so good to see them all along with all the usual faces. 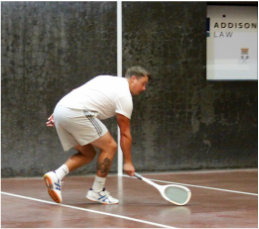 Aaron Flippence
​The groups were fairly even in score with only a few matches being one sided. In the first group Lucy & Peter were the only pair to beat Caroline & Aaron but maybe that was because it was their first match but Lucy & Peter are an established pair who know their partner’s  game well. These two pairs came through to the knockout stage winning two matches each. In the second group Liz Leach & Chris Lintott proved very strong, winning all three matches, only having a very close match with Clare Bucknell & Miles Jackson.  They went to 5 all 40 all before Chris played the winning shot, but as all four came from Oxford maybe they knew their opponents’ games well. Rebecca Kashti and Mark McMurrugh, a last minute pairing, were the other pair to go through, playing well once Mark had explained the technique of playing doubles to Rebecca. The third group had old favourites Pam & Tim Tomalin playing against Sarah McGivern, with a new partner, Peter Crerar in the first match. Sarah & Peter proved very strong in winning their first two matches 6/1 but then they came up against Katy & Giles Doy who having lost both their other matches beat them. Pam & Tim and Sarah & Peter went through to the knockout stage. 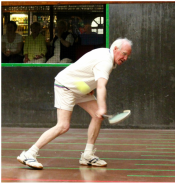 Peter Crerar
​The first three matches in the Knockout stage were very close. The first quarter final was between Lucy & Peter and Rebecca & Mark. It was very even to 4 - 4 then Lucy & Peter, having a good few points in their favour, won two quick games, with the winning shot made by Peter into the winning gallery.  The next match, between Liz & Chris and Caroline & Aaron who were giving a large handicap, proved to be a very hard close match. The match went along level to 5 all with Aaron seeming to be able to place the ball exactly where he wanted to and Caroline volleying very strongly at the net. They were a very strong pairing but Chris & Liz kept up with them all the way getting to 30 – 40 in the last game, when Aaron finally placed the ball out of reach for Chris and won the match. The first semi-final again proved very close going game for game each way right up until the 5 all game when, at 40 all, Sarah & Peter finally overcame Lucy & Peter to win that last point and get to the final.  The other semi proved very one sided as Caroline & Aaron had finally found their strength and powered their way through Pam & Tim to win 6/1. The final was also one sided as Sarah & Peter could not find a way through Caroline & Aaron no matter what they did losing 8/0 which was a shame after the close matches we had had through the weekend but Caroline & Aaron just got stronger and stronger through the tournament , playing a very controlled game, hardly making any errors and so able to overcome the mountainous handicaps they faced.

Thanks must go to Seacourt which once again proved to be a very happy and enjoyable club to be at and one which we hope many will return to next year. Thanks also to the markers Ged and Aaron (who was marking his first tournament) to Alex & Viv for the organisation, to Lucy for behind the scenes work of getting all the prizes and glasses and finally a really big thank you to Addison Law (Chris Halliwell) who once again proved a very generous sponsor not only with the money to run the tournament but also providing Pimms and canapes before the dinner on the Saturday and being around most of the weekend to cheer on the players.