If you use Google Chrome, Firefox or Safari as your browser (all can be downloaded free from the internet) moving your mouse over the pictures will show a caption.  Unfortunately Internet Explorer does not offer this facility. 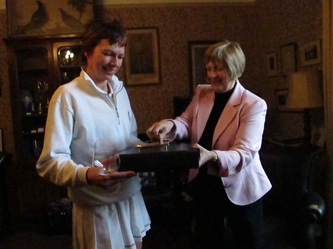 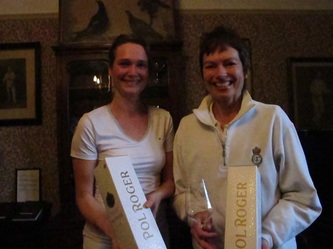 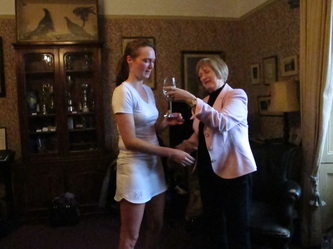 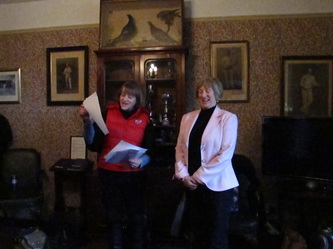 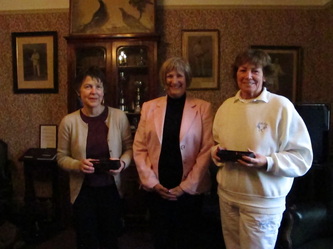 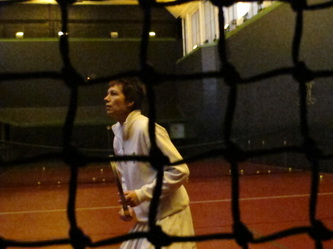 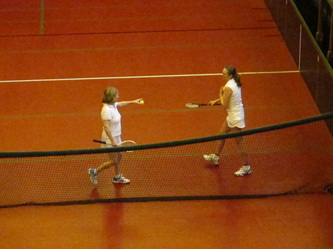 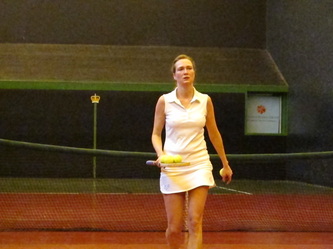 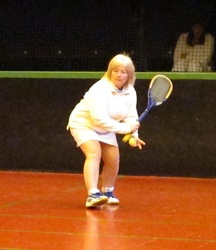 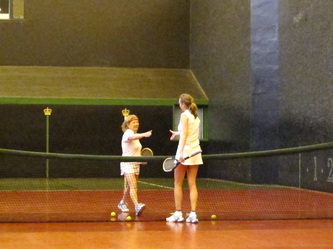 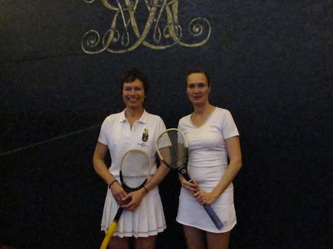 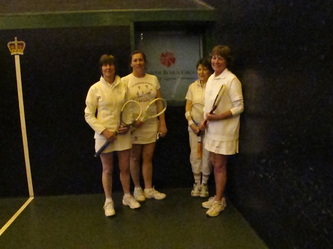 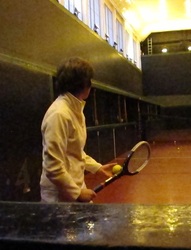 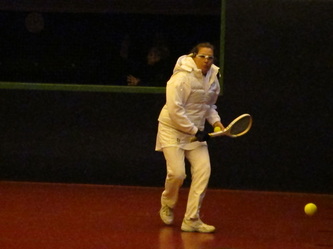 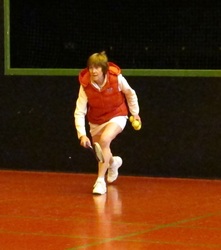 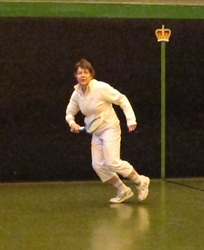 Many thanks to Linda Fairbrother for the photographs. 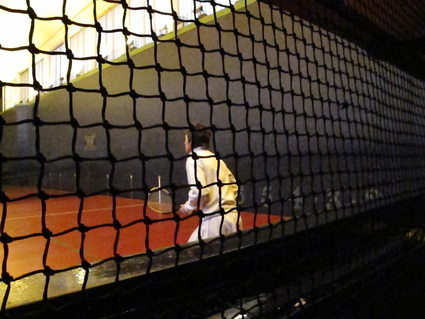 Penny Lumley from the dedans
One would never have known it was the first few days of Spring - snow, sleet, rain, biting winds…but, nothing daunted, the entrants for the Masters gathered at Hampton Court for the third year running and were made very welcome. Sadly, the holder and winner for the past 2 years, Sue Haswell, was injured and so not able to defend her title - we hope she’ll be fit again very soon.

The early rounds were played on Friday. The matches produced enjoyable (for both spectators and players) tennis and many were closer than the scores might indicate. The last match of the day was the longest - in fact it was the only 3 setter of the whole tournament. Linda Sheraton-Davies and Lucy Hutchinson did battle for two  hours,  with almost every game going to deuce (often several deuces). In the end Linda triumphed, 6/5, 5/6, 6/1.

Saturday saw the first appearances of the better players. Linda’s prize for beating Lucy was to play Penny Lumley, a real treat for Linda, but with the inevitable result of a win for Penny (6/0, 6/0).  Carolyn Nicholls and Sarah Parsons played a match of good rests, with Carolyn going through 6/2, 6/4. Then came Elvira Campione against Katie Leppard. There was much hard hitting and volleying,  but Elvira kept the ball lower over the net and won through, 6/3, 6/1.  After that, Tiff Fielden and Maggie Henderson-Tew took to the court. It was a hard fought match, with Maggie upping her game and getting some good chases on return of serve. Tiff changed her serve, sending down some demi piques, and won 6/0, 6/1- a score which did not do justice to Maggie.

On Sunday, a bitter wind continued to blow through the corridors of Hampton Court, but the action was warm on court as the tournament moved into its final stage.  First up were the semi-finals, starting with Elvira Campione against Tiff Fielden.  This was a fascinating battle between what might be called the ‘modern’ game and the traditional.  Elvira used her height and (for the Masters) extreme youth to whack double –handed drives and volleys into the corners; while Tiff concentrated on low shots sliding down the sides, especially towards the backhand corners, to cut into the angles and make the ball all but unreturnable.  The high leaping intercepts and power of Elvira proved the more successful, and she won 6/2 6/4.

In the second semi, Carolyn Nicholls was out-classed by Penny Lumley, but much to her credit she never gave up and, whatever the score line, continued to play excellent attacking shots and kept her head up, winning many points.  But Penny kept her down the hazard end, and just always had one more shot in her locker, whatever Carolyn tried. It took 30 minutes for Penny to go through 6/0 6/0. 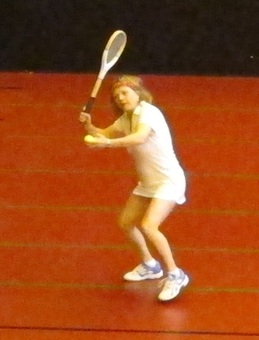 Tiff Fielden serving
In the Masters Final, the dedans hoped for a good long battle between the very talented Elvira and the many-times Champion Penny.  And indeed first blood went to Elvira who took the first game after four deuces.  She was up in the next two games, too, but Penny each time clawed back to win, and so was on her superb way.  Elvira was still getting some great high volleys back – her effective weapon against Tiff – but she had to work for them by stepping closer to the net, and was then vulnerable to the next shot whizzing past.  She was also deprived of her other devastating shot, a backhand volley on any ball off the service penthouse into the grille corner: Penny just wasn’t putting the ball either high in the air or onto the penthouse.

The first set  went to Penny 6/2, and then in the second she began to really use the sides, keeping the ball low, low, low.  Not surprisingly, Elvira began to get frustrated, sternly muttering to herself after lost points.  She wasn’t giving up, though, and the first three games of the set went to deuce.  But from 4/0 on, Elvira began to make mistakes under the pressure, even on her formerly invincible backhand.  And Penny calmly and beautifully kept the crafted shots coming, to take the Masters title 6/2 6/0. 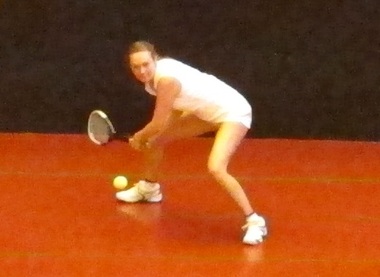 Elvira getting down to her two-handed backhand
In the other Sunday competition, the Plate Handicap Doubles final saw Sarah McGivern and Trish Morris, against Savannah Poole and Lucy Hutchinson, with a receive 15/owe 15 handicap in the former’s favour.

Despite the hard hitting Savannah (who was sporting one of the LRTA's new gilets against the cold) she and her partner Lucy had a struggle. They hit hard but Trish and Sarah stayed steady, and with the help of their handicap advantage, by 6/2 looked set to romp home - only two more games needed to win.  At 7/3, 40-all, with a Hazard chase to defend, it might have all been over, but Lucy’s return of serve lobbed beautifully right into the back hand corner, to deny Sarah and Trish victory at that point.  And in the next game, Lucy and Savannah again scraped through from 0/40 down.  So now it was 5/7 and they were really giving the spectators their money’s worth.   And indeed yet another 40-all game followed.  But this time, Sarah was serving on game point, and with a perfect bobble, she and Trish finally won the match 8/5.

Thanks to RTC Club and members, and the many markers: Nick Wood, Les Ronaldson, Chris Chapman, and Stefan King; and to Helen Crossley from the RTC Board for presenting the prizes.   And particularly to Katy Weston for all her organising, especially for coping with many revisions of the draw as injuries forced out players in the run up to the tournament.  Lucy Hutchinson acted as her right-hand man, and Linda Sheraton-Davis organised the dinner on Saturday evening and with her team provided the delicious lunch time food.  Finally much gratitude is due to Katy’s company Burnham Rosen Group for the sponsorship of the tournament, Sheila Macintosh for the prizes and Pol Roger for the champagne.