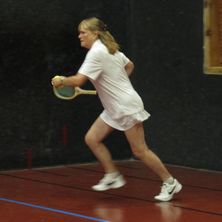 Gabrielle 'on the run'
​September comes, and with the cooler blasts of autumn, the High/Low tournament is upon us….
Among the regulars we were pleased to welcome some newcomers from Newmarket and Hatfield.
Saturday was spent with all players getting at least three matches and summing up their opposition!
The Sunday matches reflected no particular signs of over-consumption of alcohol at the tournament dinner … and later..
Lucy Davies & Ros Emrys Roberts put up a good fight against Annabel Wyatt & Philippa Wells, though the latter pair’s victory was mainly down to some fine serving.
Rebecca Kashti & Katy Weston took on Sarah McGivern & Hazel Dunn. Sarah & Hazel took an early lead, but in an exciting comeback from 1-5, Rebecca & Katy won through.
Past winners, Gabrielle Smart-Fourquet & Hannah Lucey, started as they meant to go on. The similarity in handicaps is a great advantage in this tournament and they didn’t drop a set throughout.
In the semis, Rebecca & Katy played a valiant game against Hannah & Gabrielle, fighting back from 2-5 to 5-5, but in the end it was a win for Hannah & Gabrielle. 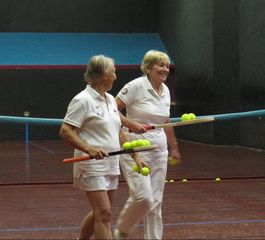 Hazel Dunn & Sarah McGivern enjoying the tennis
Linda Fairbrother & Jill Akers v Ros & Lucy was really anybody’s match. Jill’s steady serving and Linda’s cunning returns helped, but Ros’s use of all parts of her racquet confused her opposition from time to time. At 4-4 it was anyone’s game but Linda & Jill buckled down and won 6-4.
Gabrielle & Hannah faced Linda & Jill in the final. A certain amount of battle fatigue began to show, but Gabrielle’s well-known tenacity and Hannah’s ability to return EVERYTHING brought the event to a close, winning the final 6-2.

A very big thank you to Newmarket Tennis Club, to Hazel Dunn for her massive contribution to the success of the tournament, to Suzanne Lindsay for co-catering with Hazel (and for playing with me in the tournament, for the first time, and improving with every game), and lastly, but by no means least, to Andrew Knibbs for his unfailing good humour and his ability to mark matches ALL DAY!


​Many thanks to Pam for her usual excellent organisation and for supporting the tournament.  (Ed on behalf of all the players.)
Return to top of page