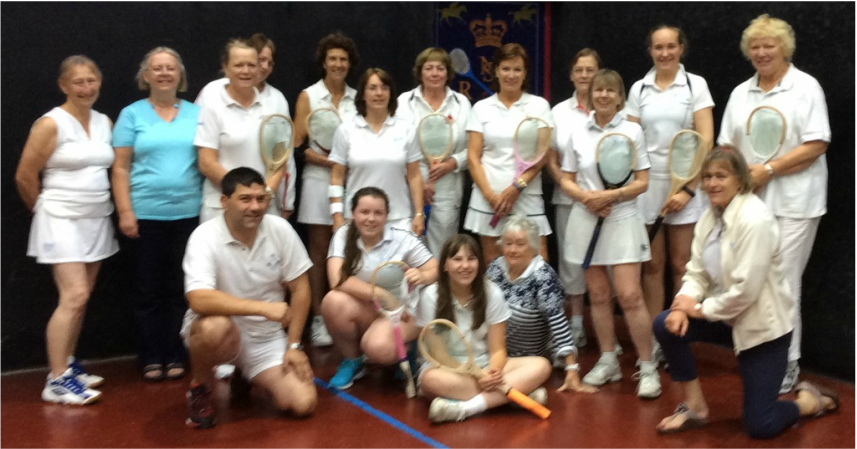 The contestants with Andrew Knibbs the marker

What an excellent weekend we had at the new venue for this tournament:  Newmarket.  Everything both on and off court had been beautifully organised, there was a full draw and everyone turned up on time to a warm welcome!  Laughter abounded throughout the weekend with plenty of good-natured banter between the participants as well as some seriously competitive tennis.

In case you are not familiar with this tournament the entry is limited to 16 players.  Players enter as individuals and the doubles pairs are arranged according to individuals’ RTO doubles handicaps  -  the best handicapped player partnered with the worst handicapped player and so on to the “middle”.  There is one round robin group so everyone gets at least seven matches over the two days and the top four pairs go through to knock-out semi-finals and then a final.  The format means that people frequently play with someone whom they have never played with before and also that there are always plenty of spectators (barrackers?) around to add to the atmosphere.

This year the handicaps worked out to be very close so there were quite a few matches played off level and the largest handicap awarded was owe ½ 15.  There was a wide age range  -  the youngest being 14 and the oldest over 70  -  this may explain why there were many more shouts of “Yours!” than of “Mine!”.  Several people who normally enter were unable to do so this year so we had some new participants and new pairings which provided unknown quantities in terms of who would triumph and who would not.

Most of the round robin matches were very close with only nine of the 49 matches being lost to less than four games.  A surprising number of matches went from 5/2 to 5 all and several then to 40 all, playing havoc with the timetable but giving the spectators lots to cheer about.  Some spectators new to the game have probably gone away thinking it is essential real tennis protocol to go “Oooooooooooh!” (up and down the scale) whenever the game score gets to 5 all!

Two Vigrasses, Gael (Prested) and Amy (Newmarket), played for the first time in the tournament with partners who were also first timers.  Gael (Sarah and Claire’s mum) was very successful with her partner Julia Scott (Newmarket) getting through to the semis in second place.  Amy (cousin of Sarah and Claire) with Linda Fairbrother (Cambridge) was less successful but Amy was improving (as the young do!) with every game they played and they won three of their matches.  One of their wins was against Hazel Dunn (Newmarket) and Sarah McGivern (Hardwick) when the score was 5 all and Sarah and Hazel were 40/30 up defending a chase 2 and 3.  Amy calmly played a force return of serve cross court, past Sarah’s right ear, into the dedans to take the score to 40 all and she and Linda then won the final point.

Amy Pye (Prested) one of the holders and Geri Brooksbank (Hardwick) also got through to the semis in third place, their best win being against Pam Tomalin and Katy Weston (both Hardwick) who were not firing on all cylinders on Saturday.  However, on Sunday after Katy had had a nasty fall at the hotel and another trip during the knock up on court, she and Pam got two good wins, causing Pam to threaten to give Katy a good knock on the head before playing with her again!  One of their wins was against Annabel Wyatt (Prested) and Fiona Brown (Cambridge) who went through to the semis in fourth place.  Annabel hitting her usual hard strokes and Fiona playing a much more gentle but subtly successful game  -  placing the ball accurately with good length and pace.

The top pair was Gabrielle Smart-Fourquet (Paris) and Hannah Lucey (Prested) who won all their round robin matches.  One of their closest matches was against Candida Nicholls (Hardwick) and Liz Fisher (Hatfield), Candida and Liz taking them to 5 all before succumbing.  It was great that Gabrielle made the journey from France to take part.

We were all very grateful to Andrew Knibbs who marked throughout the weekend and appeared to enjoy the noisy atmosphere that occurred every now and then!  Our thanks to Newmarket for allowing us to hold the tournament at their court and to take up their valuable weekend court time.

Many thanks to Hazel Dunn who organised (with Pam’s help) lunch on both days and sorted out accommodation either with local players or by getting a discounted rate at a nearby hotel.  She also arranged a lovely tournament dinner on the Saturday evening and generally acted as Newmarket hostess.

The beautiful glass bowl trophies were provided and engraved with the tournament name and all the winners' names by Inkerman so many thanks to them for their support.

Special thanks to Pam Tomalin who organised the tournament so well and provided some lovely prizes.  She sensibly ignored the “helpful comments” from the rest of us players (which she characterised as “moans”) giving very firm set downs as she saw fit.  Pam does such a good job that we all hope she’ll continue to organise the tournament in future.

If you enjoy lots of tennis in a very sociable setting, you should try this tournament, but don’t forget to register your interest early as the entry is limited to sixteen players and we have definitely recruited some more fans this year.  It would be great if we had players representing more different clubs.  Looking forward to seeing you next year!
Sarah McGivern 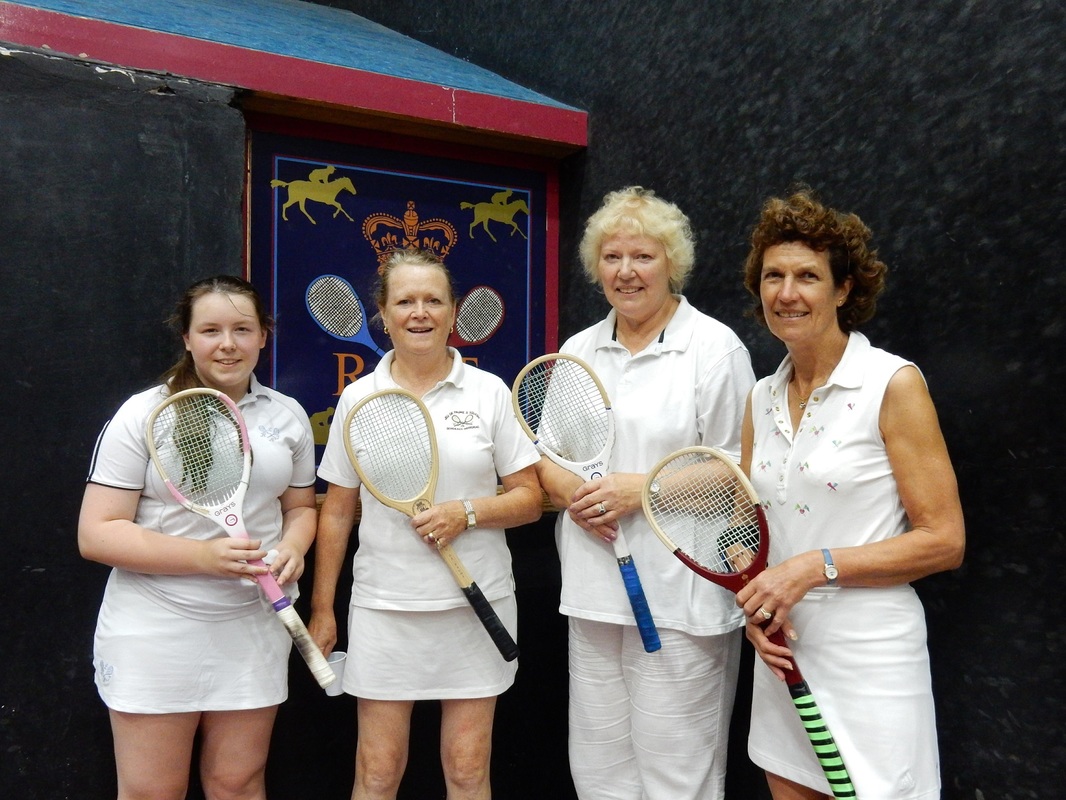