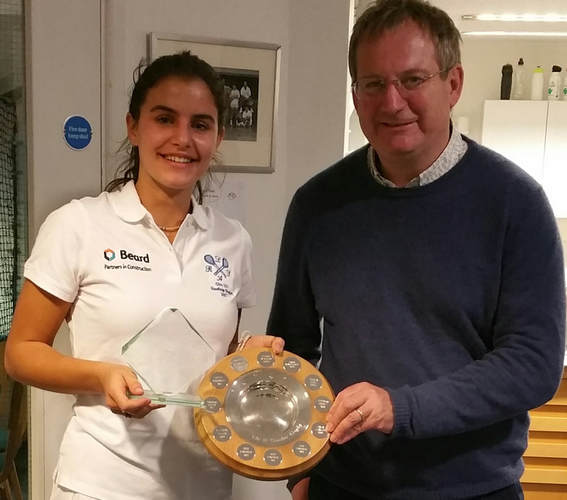 The winner with Mark Beard
The tournament took place at Radley on 25th November.  We are delighted that Beard Construction has kindly agreed to sponsor the tournament for the next 3 years.

We did not have as large an entry as in previous years due to unavoidable clashes with other sporting fixtures.  However, we had some new faces and some younger faces, who look very promising players, Honor Vallat being only just 10 years old.  Group matches were played up to 7 games.
Group 1 Arabella Spraggs – Wellington, Marina Eastwood – Moreton Morell, Olivia Boulton – Seacourt

The first match of the day was Arabella v Marina where Arabella raced to a 5 – 1 lead with some lovely serving and accurate shots down the line. Eventually, Marina’s rustiness from not having played since the summer wore off and she started hitting some lovely cross court backhands and she crept back to 5 - 6 when Arabella again produced some effective serving to take the set 7 – 5.  Arabella then played against Olivia, Rec 15 – owe ½ 15.  The match was very even until 2 – 2 then Arabella raced away to win 7 -2 with some fine serving and Olivia not quite maintaining her usual consistent play.  This last Group 1 match between Marina and Olivia was to see who would go through as group runner – up.  With Olivia owing 15 it proved to be a very even contest.  Both players have a good eye for a ball, are attacking and move well about the court.  The match was level pegging throughout with Marina serving to a great length in the final game and taking the match 7 – 6.

The first match of Group 2 was Daisy, nearly 15yrs old, clearly an accomplished lawn tennis player up against Honor, just turned 10 yrs old with little racket playing experience and playing off level!  Although Daisy decisively hit Honor off the court, winning 7 – 0, Honor tried hard to run down every shot.  It was then Eloise’s turn in her first ever tournament to be attacked by Daisy’s forceful ground strokes;  again Daisy won 7 – 0.  Honor v Eloise was to see who would go through as group runner – up.  Both girls had got their eye in and were more used to the court.  Honor running about the court even in between points moved to a 4 – 1 lead but steadily Eloise crept back by hitting better serves.  Critically at 5 – 4 up and 40 – 40 Eloise managed to bounce a shot into the Dedans to take the game, then quickly win the next game and the match 7 – 4.

Alice v Maisie was the first match of this group with Alice giving Owe 30 – Rec ½ 30, a very tough handicap for anyone to cope with let alone when you are recovering from a cold and have an opponent with a good eye for the ball.  Maisie won in commanding form 7 – 1.  Alice then played India.  Both players moved well about the court but India’s beautiful attacking play into the corners of the court earned her a convincing 7 – 0 win.  Next match India v Maisie would see who would win the Group.  To start with the match was fairly even but then India really got into her stride; she has a great eye for the ball, volleys well and attacks every ball fearlessly, finishing up hitting the final shot most impressively into the grille, to win the match 7 – 3.

Phoebe v Isolde was an entertaining first opening match in this Group.  Receiving 15 in each game, Phoebe moved well about the court and retrieved some tricky shots but had to give in to Issy’s tighter serve and greater tactical experience resulting in Issy winning 7 – 4.  Phoebe’s next match was against Jess.  Whilst Phoebe played better and better and the rallies were much longer, it was difficult for her to cope with Jess’s attacking shots into the backhand corner, so Jess won 7 – 2.  Issy v Jess was always going to be a close encounter and went game for game until 5 -5 with Issy taking the next 2 games to win 7 - 5.  The rallies were lengthy but the edge was just with Issy who hit some very controlled tight return of serves onto Jess’s backhand frequently gaining chases and thus the serve making all the difference in the end. 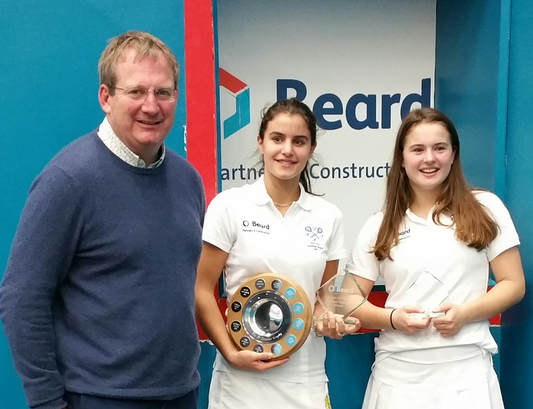 Mark Beard with the finalists 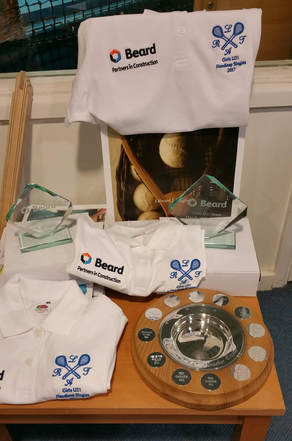 Knock Out stage played one set to 6 games.
​
The first of our quarter–finals was India v Marina.  India had made very few mistakes in her group matches with her attacking play but suddenly she played with many loose shots and unforced errors which she could ill afford to do when giving an owe 30 – rec 15 handicap.  Meanwhile Marina was beginning to show how steady she was off both wings and at volleying and consequently raced away to a 6 – 0 victory.  Next on court was Jess v Daisy where Jess gave owe 15 in each game.  With her attacking ground strokes and some cracking volleys, Daisy raced to a 5 – 0 lead.  Jess dug deep and started serving more accurately and hit some superb cross court returns of serve to get back to 3 - 5.  At this point Daisy started serving really tightly again, close to the nick taking 4 points on the trot, the game and the set.  The next quarter – final was an all Wellington affair between Arabella and Maisie.  Both girls have a very good eye for a ball and play good ground stokes but have yet to learn good footwork and balance when playing shots.  The match was fairly even throughout with Maisie just keeping ahead and when at 5 – 4 up and 40 – 40 managed to hit a nick serve and win the set.  Our final quarter - final was Eloise v Issy.  Eloise’s serve was much improved in this match. However, even though Issy was giving away 20 points which is a tall order for any player she struck the ball consistently and her level-headedness won her through to the semi – final 6 - 3.

The first of our semi – finals Marina rec ½ 15 v Daisy was always going to be a strong match with both players reading the ball well, they liked attacking the ball and are good at volleying.  Whilst Marina’s serve had improved throughout the day, if it was at all loose, Daisy would attack to a good length cross court.  The match went game for game and at 4 – 3 down Daisy produced some stunning volleys to the base of the tambour to level to 4 – 4 and again at 5 – 4 down at 40 – 40 hit more awesome volleys to make if 5 – 5.  At this point Daisy had the serve and executed her side wall serve very tightly to take the set and match 6 – 5.

The second semi – final saw Maisie v Issy with the handicap being Rec 15 –owe ½ 30.  Issy served rather loosely to start with to allow Maisie a 3 - 1 lead but Issy started playing catch up.  Maisie played consistently throughout the match and extended her lead from 4 -3 up to lead 5 - 3 with some helpful unforced errors by Issy.  Then Issy started retrieving extremely well and aided by an unfortunate double fault by Maisie, it was suddenly 5 – 5.  Issy got to 40 – 15 up and Maisie hit a stunning shot into the dedans and with Issy making an unforced error it was now 40 -40. The final rally continued with Issy hitting an unreturnable shot to the base of the tambour to win the set and the match 6 - 5.

So, to the final between Issy and Daisy, owe 15 – rec ½ 15, being played up to 8 games.  There were some great rallies throughout this match.  Daisy found it easy to return Issy’s serve and managed to edge ahead to lead 3 – 1.  Then Issy took the next game to make it 3 – 2 but squandered advantage points in the next game that would have made it 3 – 3 so instead she went 4 – 2 down.  Daisy then went on a roll with some ferocious forehands, great volleys and continuing to hit good length serves with nearly a nick a game and take the match 8 – 2.  It was by no means a one-sided final, Issy tried hard to push Daisy into the corners of the court but Daisy so often had an answer.  It was definitely Daisy’s day.

It was good to see players enter from 6 different clubs and we hope to see more clubs represented in the future.  Our thanks to Radley College for allowing us to hold the tournament and also our thanks to Chris Ronaldson and Adam Phillips for all their advice and marking throughout the day.  We were very grateful to Beard for the sponsorship and to Mark Beard for coming and presenting the prizes.
​
Written by Jill Newby

Thanks to Jill and Alex Garside for organising the tournament and to Alex for the photos.

​
Return to top of page