Scroll down for slideshow of Photos
​We shall soon know the outcome of the referendum…  But for now- in the spirit of European friendship -  nineteen ladies met in Paris to do battle.  It was great to see so many Dutch players there to really give it a pan-European atmosphere.
Bright light flooded the court on Saturday (till the clouds opened in a humungous thunderstorm), so Gabrielle thoughtfully provided a pile of hats for any dazzled players.  There was also a plate of croissants awaiting early arrivals – no wonder we love this tournament!
​Day one and the round robins progressed in predictable fashion and, happily, all players were guaranteed a further round as winners, runners-up, or in the plate.

​The Bollermans (Lucie and Saskia) had a cracking semi final against Rebecca and Pam, winning 6-5. Clare and Katie saw off Gabrielle and Bernadette with power and accuracy. In a great final, which Katie and Clare won 8-4, the dedans was treated to an exhibition of superb fast tennis with long rests and short chases. It was a fabulous display of determination and dexterity by all four players, and Saskia deserves special mention for playing with good humour even though her very low handicap made all the games extremely difficult. She is certainly a world champion in the making. 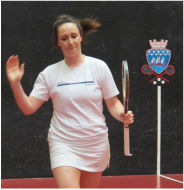 Clare Bucknell
Eight winners and runners-up battled through the knock-out stage, leaving Katie Leppard, Lucie Dekker, Feikje Nassy and Clare Bucknell as the eventual semi-finalists.
In an all-Dutch confrontation in the first semi-final,  Feikje managed to hold her own against Lucie in a fine match where Feikje showed steadiness and calm to win 6-3.   The other semi-final was between Rebecca and Clare. Rebecca got off to an unsteady start and was trailing 0-4, but made a tremendous comeback to even the score, finally conceding 4-6. Clare’s power and accuracy were much admired.
The final between Feikje and Clare was a little disappointing as Feikje never got into her rhythm and Clare dominated from the start. Her win, ​8-1, was well deserved, as her variety of serves and ground strokes made it all too much for Feikje. 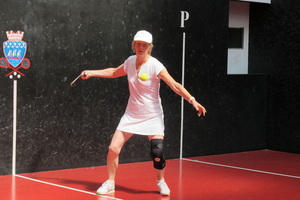 ​​Katy Doy lost to Saskia Bollerman 6-1, but poor Saskia, playing off 28.3 had an enormous handicap difference to cope with, and the experienced Liz Fisher took full advantage and triumphed 6-1.
Anne Balcerkiewicz conquered a less than agile Bernadette Bidouze 6-2 and went on to face Ros Emrys Roberts whom she beat with great poise.
The plate final was won by Anne who beat Liz Fisher in a display of focused determination.
Gabrielle, as usual, organised a brilliant tournament…. Such a pity she was unable to organise the weather better!
So.. many thanks go to Gabrielle, to Rod McNaughton for the endless marking and to the Paris committee for allowing us to hold the tournament there.
Report by Pam Tomalin                                                                          Thanks to Linda Fairbrother for the Photographs
Return to top of page