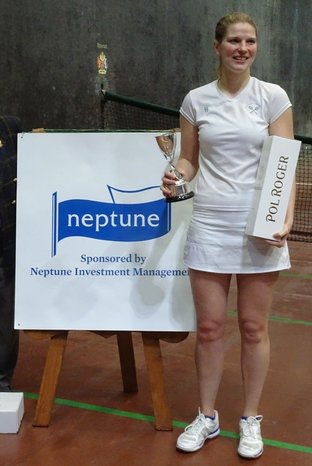 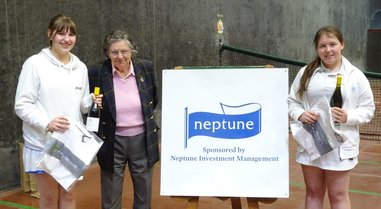 This year it was good to see so many young players, including the 14 year old Amy Pye the youngest ever British Open entrant, and she got through to Finals day, with her partner Hannah Lucey 16 years old.
Day one proved to have several matches which were very one sided but it was great to see so many players playing in the Open for the first time.  The closest match was between the two Izzy’s:  Candy and Hunt.  They proved to be a very well matched pair and although Izzy Candy started both sets very well Izzy Hunt was catching up fast.  The end result was a win for Izzy Candy 6/4 6/4.  The last match of the day proved the hardest.  Liz Leach went to 5/2 with a set point before Jill Newby started to work her way back and finally won the first set 6/5.  Jill then won the second set 6/1.
The first match of the day on Thursday was between Alex & Jess Garside.  It proved to be a very hard fought match.  Alex started well and went to 3/1, then Jess got back to 3 all but Alex went ahead and won the first set 6/3.  Jess then started the second set in a very positive way and went to 4/2 and 5/3 before Alex started playing better and after Jess lost a set point Alex went on to win 6/5.  This match took nearly 2 hours with both players feeling they had really been in a close match.
Georgie Willis played really well to get 4 games in the second set from Irina Dulbish and Evelyn Fleming fought well to take two games from Freddy Adam.  We certainly have got some very good ladies coming through.
The first match in the doubles again saw the Garside’s playing, this time together, and once again they managed to stay on the court for nearly two hours.  Sue Haswell and Nicola Doble came through to win 6/1  2/6  6/3 in a tight, hard fought match with Penny & Tara Lumley coming through in the other half of the draw. 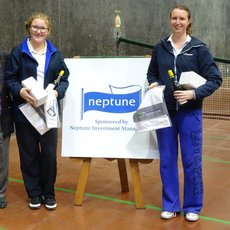 ​​The first match on Friday saw the two youngsters Amy Pye and Hannah Lucey fighting off together in the last of the first round plate matches.  Amy won 6/3 6/0 for the honour of playing Georgie Willis in the semi-final of the plate.  Last match of the day was a family affair with Penny Lumley playing daughter Tara.  Spectators wondered if the young Tara would prove too strong but Penny used all her skill and determination to overcome Tara who was 5/2 up in the first set to win it 6/5.  Penny then went on to win the second set 6/3.  In the Handicap Doubles Georgie Willis and Izzy Candy won the group winning both of their matches.
Semi Finals day proved again to have some very exciting matches with the young players showing the talent the LRTA has nurtured with their coaching sessions really coming through.  In the two singles semi-finals Sarah Vigrass came up against Freddy Adam who proved a very strong opponent.  The sets were level for most of the game but in both sets Sarah, getting used to the court, proved too strong and won them both 6/4 6/4. Penny again playing a younger player, Irina Dulbish, in the second semi-final proved to strong and won the match 6/0  6/2.


Singles Plate Final
One of the younger players had a very busy, tiring day as she was in three of the five matches that day.  Georgie Willis, not quite 18, was first in the Singles Plate against Liz Leach.  Georgie hits the ball very hard, and mixes her shots well.  She won 6/1 6/2 and then went on to play with Izzy Hunt in the Doubles Plate. 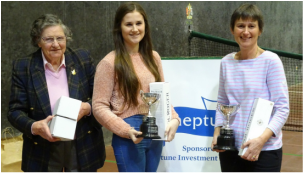 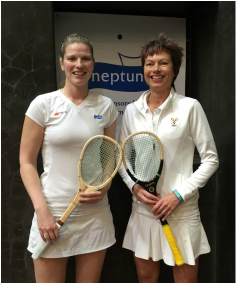 Sarah Vigrass and Penny Lumley before the Singles final
​Open Singles Final
With less than a point between them on their handicaps, the final between Sarah and Penny was set to be a hard fought match of top quality and it lived up to expectations, with long rests, low, well cut cross court exchanges, not to mention hard and fast volleying and stunning retrieves.  In the first set Penny fought hard, making Sarah work for every point but Sarah powered her way through, making few mistakes and took it 6/1.
The first game of the second set took almost 20 minutes, including many deuces, with Sarah eventually winning it.  She then took the next two games to be 3/0 up.  In the next game Penny went into the lead at 30 love, but a bullet into the grille and couple of well-placed shots took Sarah to the serving end at 30/30, but Penny hung on through four exhausting deuces to win the game, and after a long rest of amazing shots and retrieves, she took the next game.  Sarah then took the next two games, but although down 5/2, Penny wasn’t giving up.  She found the dedans to win chase worse than a yard and then took the game 5/3.  The next game saw Sarah win two good chases with beautifully cut shots but Penny kept up the pressure, and after yet more chases, won, so it was 5/4. Sarah got back to the service end by laying two tight chases, Penny could not beat them and then found herself 40 love down, but she fought back to 40/30.  Sarah then produced the sort of serve that no one can plan, it behaved as no one was expecting, leaving Penny high and dry and Sarah had clinched the title.  The score of 6/1, 6/4 belies the closeness of the tennis played.
Handicap Doubles final
The youngest and very talented pair in the tournament, Hannah Lucey 16 and Amy Pye 14, from Prested got to the final.  In the final they faced the hard hitting pair of Izzy Candy and Georgie Willis, the handicap was 15/owe 30 in favour of Hannah and Amy.  They hung on in there, winning three games against some consistent, strong tennis from the more experienced Izzy and Georgie but the experience of the older pair told and they coped well with the handicap to win 8/3.
​ 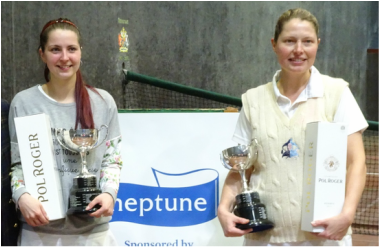 Irina Dulbish and Freddy Adam Doubles Champions
​Open Doubles Final
The final match of the tournament was the Open Doubles.  This saw Sarah Vigrass on court again partnered by Alex Brodie who stepped in to partner Sarah when sister Claire Fahey had to pull out.  Alex’ doubles handicap is 39.8 compared with Sarah 25, Freddy 28 and Irina 30.
When Sarah & Alex and Freddy & Irina took to the court Sarah had already had a hard match against Penny but one would not have known this from the way she covered all corners of the court, with Alex guarding the galleries and, in the first set, when at the receiving end, playing on the right, letting Sarah take most of the shots.  The first game was a long one, setting a high standard which continued throughout the match of fierce volleying, amazing retrieves, low, well cut ground strokes and every corner of the court exploited.  Freddy’s volleying and Irina’s fierce shots took them to 5/1 in the first set, despite Sarah’s athleticism and seeming ability to be at both sides of the court at the same time.  Then Sarah & Alex came back with Sarah winning her service.  In the next game Irina turned up the power to lead 40/15 but Sarah & Alex fought back and took the game 5/3. Freddy then found a purple patch and she and Irina took the set 6/3.
The second set saw a change of tactic from Sarah & Alex, with the latter defending the grille when not returning serve.  The pair surged to 4/0, Freddy & Irina then got a couple of games and then the games alternated until Sarah & Alex took the set 6/3.  A few lines to describe the set, but every point was fiercely fought.
The final set saw Freddy and Irina pull together and play a very solid game to take it 6/2.
We have had five days of very exciting play with some new players emerging from the coaching they had been given courtesy of the LRTA.  This programme has proved very successful and it is hoped to have several more new young players attending the classes this year.  Sarah proved a very worthy winner of the Singles and Penny certainly gave her a run for her money fighting all the way.
During the tournament the dedans and bar were buzzing, which may have made concentrating difficult for those younger ones who had to work or study whilst those around them watched, cheered and imbibed.  Seacourt did us proud, many thought the dinner was the best they had had there.  Thanks must go to Seacourt for providing the court, Ged and Adam for marking all the matches and to Alex and Viv for pulling it all together day by day.
Return to top of page