Supported by an Anonymous Donor 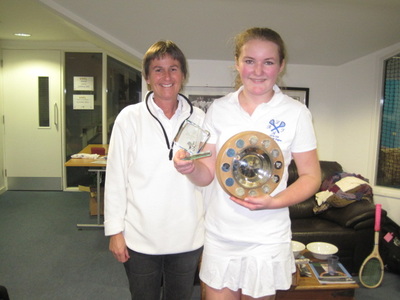 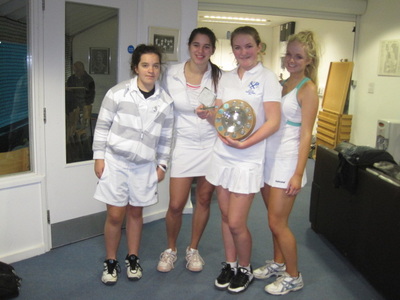 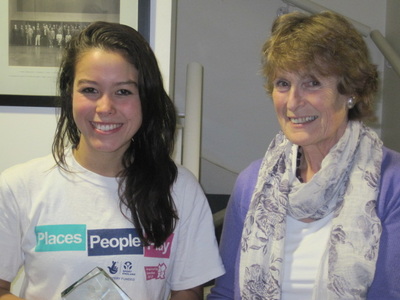 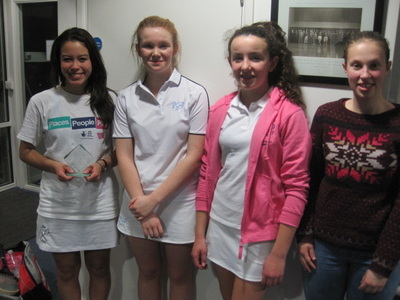 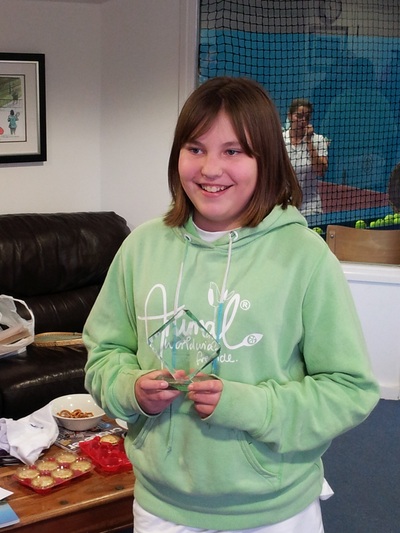 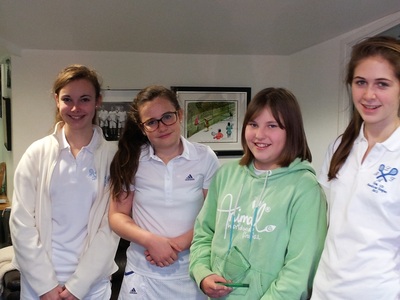 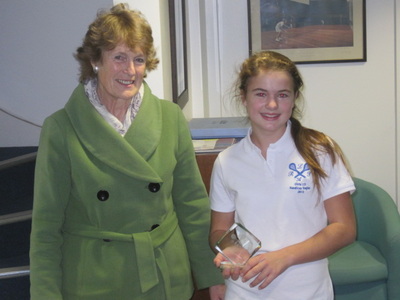 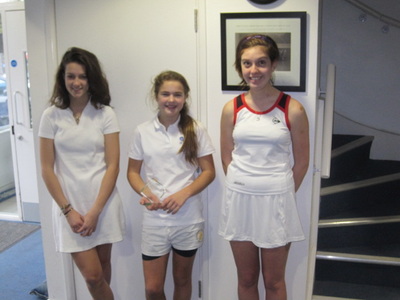 Thanks to Jill Newby for the photos

Report of the U21 Handicap Singles at Radley……by Jill Newby

There were an encouraging 15 entries for the tournament this year.  I say encouraging because the numbers were slightly down on previous years but all the players were good ‘games players’ and those who were playing in the tournament for the 2nd time showed us how much they had improved since last year.

In Group A – Hannah Parry (58.4), Mollie Thomas (54.7), Georgie Willis (59.7) and Saskia Bollerman (55.3).  First match on court was Hannah v Mollie.  This was a cracking game full of attacking shots.  Hannah produced some excellent volleys and half volleys whilst Mollie some super cross court forehand drives.  Only 2 games didn’t go to 40 all.  In the end Hannah was the victor.  Next up was Georgie v Saskia.  Both girls were trying hard to place the ball well, Georgie especially by getting a chase asap into last gallery and Saskia producing good cut shots.  The match went game for game until 4 – 4 when Georgie sneaked a 6 – 4 win with some tight serving.  Georgie now stayed on court to play Hannah in another close game, 2-2, 3-3 you’ve got it.  Unlike their earlier game strangely this was a game where both girls made unforced errors, having patches of not moving their feet.  In the end Georgie won as her attacking play became more successful and she served well on the chases.  Mollie now played Saskia.  Mollie’s relentless forehand cross court continued to be most effective but Saskia began to get into her stride with some beautiful backhands cross court to the base of the tambour and some good volley return of serves, winning the match 6 – 3.  Saskia then took on Hannah and raced ahead to a 5 – 1 lead by continuing to slot in the superb backhand cross court to the base of the tambour, cut volley return of serves and some excellent cut floor shots.  Hannah clawed back a couple of games with some lovely volleying and great serving but the gap was already too great and Saskia served well to take the final game and match 6 -3.  The final game was Mollie v Georgie.  Again this was another close match going game for game until 3 – 3. Mollie produced some excellent retrieving but was inclined to leave quite a few shots to come off the back wall allowing Georgie to get back into position.  Georgie meanwhile continued to serve well and accurately place the ball into the corners of the court to bring off a 6 – 3 win and become the overall tournament winner.

Group B Isabel Hunt (70.4), Felicity Sargent (65.3), Anna Willis (68.4), Eve Shenkman (66.9).  Isabel an unknown quantity was on first against much improved Felicity.  Isabel raced through the set to a 6 – 2 win with some very attacking shots and excellent volleys.  Next on court were Eve v Anna.  This was a very even match going game for game until 4 – 4 with Eve serving well and both girls retrieving well plus hitting some tight shots down the main wall.  Eventually Eve pulled off a 6 – 4 win.  Anna stayed on court to take on Isabel.  Isabel again showed what a good eye for the ball she has and continued her attacking play.  Anna retrieved well under such pressure and managed to hang on until 4 - 4 when Isabel stopped making the odd error to pull off a 6 – 4 win.  Next on court were Eve v Felicity.  Here Felicity was much more positive in this match and raced to a 4 - 1 lead with some particularly strong backhands.  Eve dug deep with some more athletic retrieving to pull back to 4 – 3 but some strong serving by Felicity brought her a 6 – 3 win.  With 2 wins under her belt Isabel just needed to win this last match.  She was relentless with her attacking play particularly with her volleying and in spite of Eve’s great retrieving Isobel won 6 – 2 and became the group winner.  The final match Anna v Felicity would be to see who would become 2nd in the group.  Both girls produced some attacking play but Felicity’s consistency gave her the edge and she won the set 6 – 3.

Group C Jess Walker (80.6), Harriet Harries- Jones (81.6), Amy Pye (80.2), Annie Fountain (76.8).  There were some very tight matches in this group and everyone improved as their matches went on.  Although she was the youngest player in the group by a few months at 11 years old, Amy had probably more competitive experience.  This came off when in their last matches whoever won out of Annie and Amy would win the group.  Needless to say with the handicap slightly in Amy’s favour the match went to 5 – 5 40 -40 and Amy won the deciding point, so she was the group winner.

Group D Amy-Laure Richards (85.3), Thea Lennon (88), Isolde Taylor (95.9).  More close matches prevailed in this group.  As there were only 3 players in the group matches went up to 8.  Amy-Laure took on Thea producing some lovely aggressive volleys to go to a 4 – 1 lead.  Thea began to find a rhythm and clawed back a few games but with Amy-Laure’s good serving and clever use of the side wall she won the set 8 – 3.  Isolde then played Amy-Laure.  This set went game for game up to 4 – 4 with Amy-Laure getting herself out of trouble many times with some excellent serving.  Isolde was game to volley Amy-Laure’s attacking shots and with her good retrieving and consistent play she moved on to win the set.  In the final match Isolde played Thea.  Both girls moved about the court well but Isolde’s steady play was the telling factor and she won the set 8 – 5 and therefore the group.

Our thanks go to Chris Ronaldson and Mark Eadle for their marking on both days and to Radley College for once again hosting the tournament.
Return to top of page