(The Match Results pages for previous years can now be found via the appropriate Archive pages.)

What an amazing match we had against Newmarket!  Four out of the five contests went to three sets, and two of the five were just under two hours long.   It all ended with the best of results – the LRTA team just managed to pip the home team by three wins to two, so honour saved all round.
The first match between Linda Fairbrother and Julia Scott, playing level, was a tussle of tactics and chases, once Linda settled down to the longer court.  Both were laying consistent chases of two or better, and then their opponent would annoyingly attack and beat them.  In particular, in one game, Linda had two chases of half a yard to beat – and then calmly won both of them, with inch-perfect strokes into the nick.   In the end, it came down to a never-ending final game at five all in the third set, with Linda having six advantage points but unable to convert any of them, but Julia converting her second advantage, to take the match 6/1 5/6 6/5.
This protracted doughty fight then set the tone for the rest of the day.
Hazel Dunn (playing for LRTA, though also the match manager for Newmarket!) against Rob Bawden was a topsy-turvy affair with the first set looking easy for Rob 6/1, and the second easy for Hazel 6/1.  Hazel was playing a good strong steady game, with some superb pick-ups off the back wall and few errors.  But Rob had more power and when he opened his shoulders, Hazel had problems.  In the final set, Hazel looked out of gas and he romped home, to win 6/1 1/6 6/3.
Pam Tomalin had another lengthy tussle, looking initially out of her depth against Ian Lindsay, who made no errors, and used every which way angles off the walls to put Pam under pressure.  She lost the first set 2/6, but then stuck in as only Pam can, and refused to let him get under her skin.  Her spin serving off the tricky Newmarket penthouse started to bite, and she took the second set 6/4 with some excellent use of the tambour.  The third set was another nail-biter, going to the wire.  Ian by now was looking tired – hoorah! – and made more errors, allowing Pam to concentrate on the corners,  and run down the ball despite her protestations to the dedans about exhaustion, to take the match 2/6 6/4 6/5.
Dominic Tomalin against Karen Pearce was an athletic and physical game, both covering huge amounts of court and neither giving an inch for the whole match. Karen's superb volleys kept the pace going and Dominic's total determination to get the ball over the net one more time gave us exciting rests and excellent retrieving on both sides - a match that was always going to come down to the wire.  And Karen got there by a whisker – 6/5 3/6 6/5 – after one hour 55 minutes of play.
Jeremy Barnett and Kim Walker by contrast both played a thoughtful tactical game.  Jeremy used his left handed play to advantage, both delivered good serves, but in the end Kim's ability to push her serve to suit the Newmarket court won the day.
​ 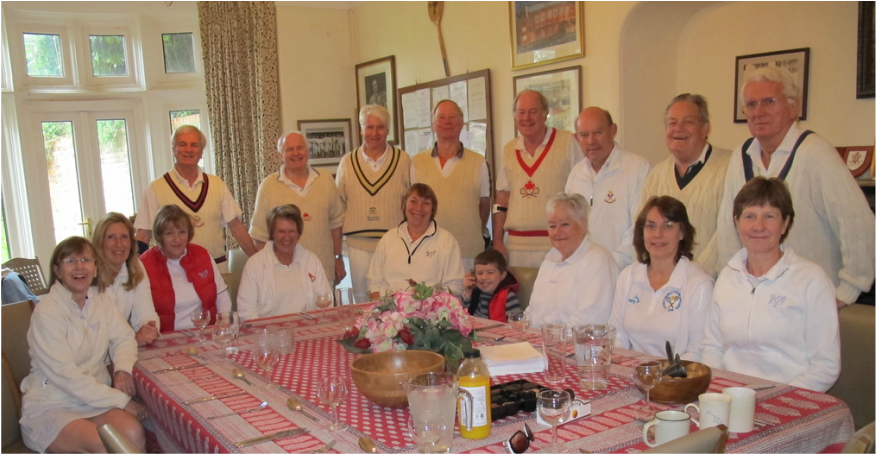 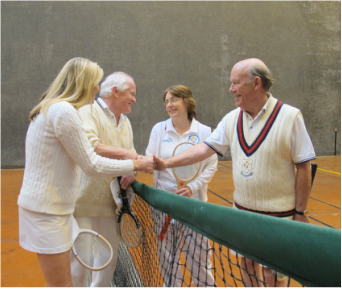 The Finalists
Eight lady players, eight gentlemen and two dogs (also, as it happens, a lady and a gentleman) played in what is always not just a social match but a particularly sociable one.  The younger generation was also represented by Harry, aged five, who brought Tyrannosaurus Rex along to watch (around 65 million years old, I believe, so the players felt pleasantly youthful).
The pairs were carefully selected to create almost level handicaps, with two round robin groups to decide which pair from each would go into the Final.
In Group 1, Candida Nicholls and Peter Swiss were dominant in all their three matches, so went through with flying colours.  Things were closer in Group 2:  Lucy Davies and Robert Dolman looked all set, with two wins, to take the group, but had victory snatched from under their noses by Carolyn Armstrong-Smith and Tim Tomalin.   This pair had one win and one loss (but with a score of  5/6) when they met Lucy and Robert; and by beating them convincingly 6/2, were into the Final.
This was an excellent game, with very close scores, but Carolyn and Tim kept to their winning ways and held steady for a 6/4 victory.
Meantime, a delicious lunch arrived – ‘Peruvian’ chicken (or so it was decided when Pam declared a secret Peruvian ingredient – she didn’t reveal whether it was potatoes, tomatoes or llama), and fab crumble provided by Katy Weston.
As always, great fun, good tennis; even Mr T Rex looked satisfied, though one of the dogs did seem to have disappeared…
Our thanks to Hardwick for hosting the tournament, and to Sheila Macintosh for the excellent organising. 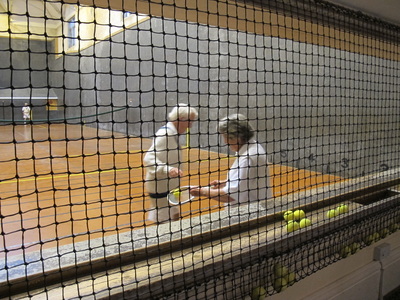 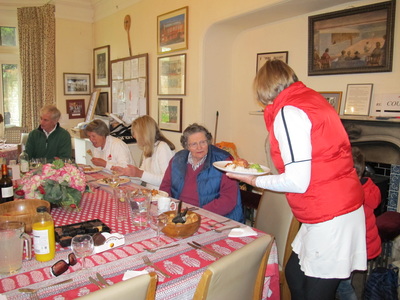 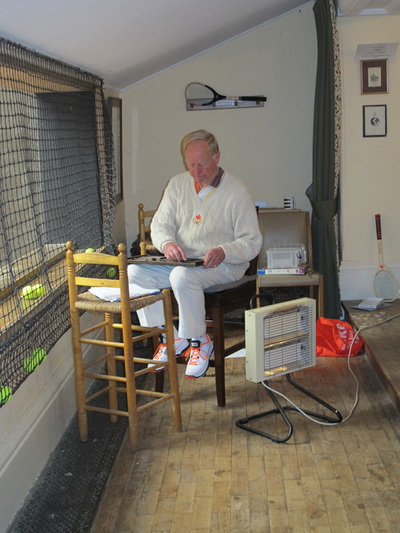