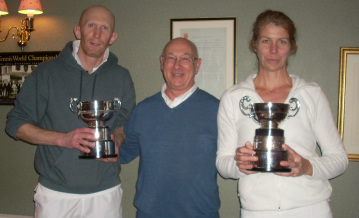 The Winners: Nick Brodie and Caroline Janes with Stuart Rose
Hatfield House Tennis Club once again hosted the Billy Ross-Skinner British Mixed Doubles tournament, sponsored by Neptune Investment Management, over the weekend of the 14th/15th/16th of February and as with each of the previous years it was another closely fought, well contested event.

The event is an invitational event for the best 16 ladies available, paired up with 16 men of a suitable standard to give each pair an even chance of winning the title.  The result of this format is some very tight matches in the groups which gives all the pairs plenty of tennis.  The top lady player was World No. 4 Sue Haswell (RTC) playing with Nick Chambers (Petworth) and they managed to progress to the Quarter-Final stage without too much trouble where they faced Nick Brodie (Hatfield) and Caroline Janes (Queens).  It was a very tight match throughout with Nick and Caroline finally progressing 6/3 5/6 6/5.

In the Semi-Final Brodie & Janes took on Ladies World No. 5 Freddie Adam (Oxford) and her partner Andrew Gaunt (Hatfield) who had only dropped one set up to this point. Nick was extremely steady, making very few mistakes, and his partner Caroline volleyed extremely well. Freddie and Andrew tried to force the play but came up just short, Brodie and Janes winning 6/5 6/5.

The second Semi-Final was between Alex Brodie (Queens) & John Beale (Oxford) against Helen-Frances Pikington (RTC) & Steve Brewerton (Hatfield).  Both pairs had come through their groups with 2 wins out of 2 and had also progressed through their Quarter-Finals relatively comfortably.  By this stage Alex and John had hit top form and they were irresistible, barely making a mistake and punishing any loose shots that their opponents hit.  Sadly although there were some great rallies it ended up 6/2 6/1. 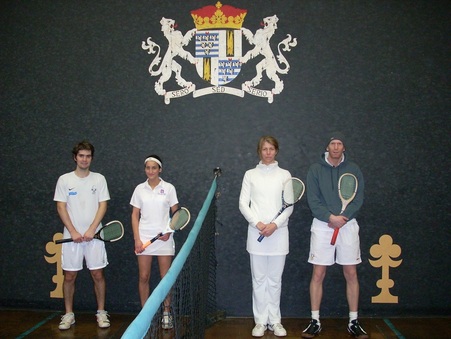 John Beale, Alex Brodie, Caroline Janes, Nick Brodie
So to the Final which saw Mr & Mrs Brodie at opposite ends of the court with Mrs Brodie and her partner John Beale having to start as favourites on the back of their devastating Semi-Final performance.  The first set was very tight with Alex and John moving into 5/3 lead only for Nick and Caroline to claw it back to 5/5 before Alex and John managed a very solid deciding game to take a vital one set to love lead.  Nick and Caroline weren’t about to go down without a fight though and calmly moved into a 5/1 lead in the 2nd set.  Alex and John were able to claim a few games back and brought the score back to 4/5 before Nick and Caroline were finally able to close it out 6/4 and take the match to a deciding set that would start 3/3.  Nick and Caroline kept the momentum and moved into a 5/3 lead in the deciding set but Alex and John were determined to keep the match alive and took the match to the almost inevitable deciding game at 5/5.  Crucially Nick and Caroline managed to take the serving end for the start of the final game and that proved decisive as Nick served a near faultless game to take to trophy with the final score 5/6 6/4 6/5.

Thanks must go to Jon Dawes and Ben Matthews for there faultless marking during 3 long hard days of tennis, Viv Dawes for her organisation and to the Hatfield ladies, Liz Fisher, Jo Hunter and Sarah Sullivan and their support staff for the wonderful food provided throughout the event.