Gabrielle Smart is to be congratulated for organising, virtually single-handedly, an excellent week of World class tennis, enjoyable handicap tennis and social events during the Ladies World Championships 2013 in Paris.  Many more photos, particularly of the visits to Versailles and Fontainebleau and the dinner at the Eiffel Tower are available on the Facebook page:  http://www.facebook.com/2013LadiesWorlds?fref=ts

Gabrielle would like to give special thanks to Christopher and Sara Reston, who set up the website and lent their beautiful flat in Paris, and Savannah Poolman, who gave so generously of her time and Facebook expertise.

Gabrielle provided the following vignettes which she feels will remain in the memories of all who took part:

A small selection of some of the many photos available 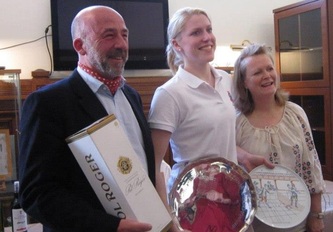 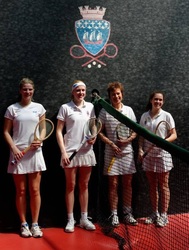 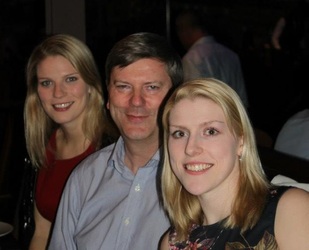 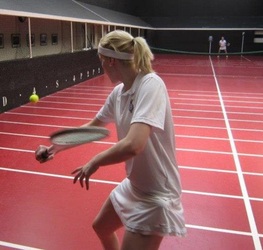 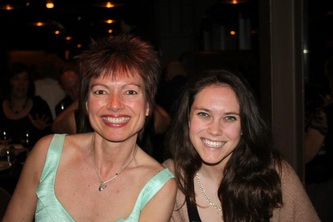 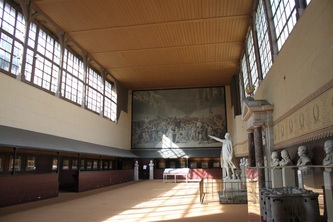 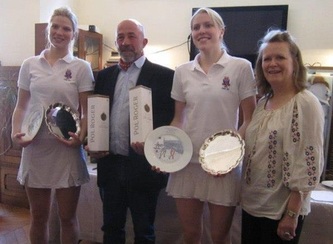 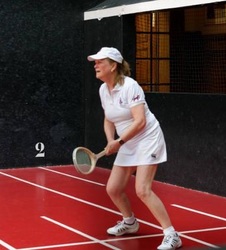 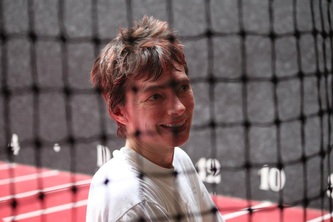 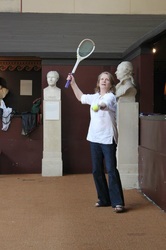 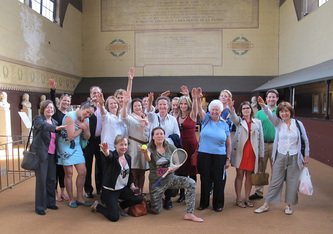 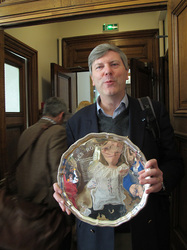 The Championships this year comprised 22 players, eight of whom were seeds, the other players being so much weaker than the seeds that not a single game was won in the second round.  A good time was had by all, however, with a handicap tournament for the fourteen weaker players, from France and Australia, being held during the first three days of the tournament.

The Championships Facebook page:  http://www.facebook.com/2013LadiesWorlds?fref=ts gives an idea of the busy social schedule the players followed, but does not do justice to the record-breaking champagne quaffing in the Paris club, which is still reeling from the Australian invasion….

Claire's accounts of the semi finals, in particular the magnificent match between her sister Sarah and Karen, sadly marred by Karen’s injury, are below.

Claire herself cruised through the tournament until the final,  where she fought her sister for the crown. Sheilagh Owens reports:

The Singles Final between the Vigrass sisters 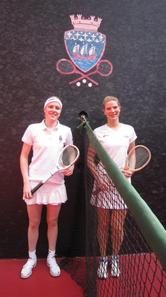 Claire and Sarah vigrass
As you would expect from the Vigrass sisters, the final  gave us beautiful tennis.  Sarah started well with the first two games under her belt, against a slightly hesitant Claire, but no, Claire stepped up the pace and took the next two.  Sarah struck back for the next game, 3/2.  Claire wasn’t having this, so took the next three games, reaching 5/3.  Again, Sarah pulled back to 5/4  and in the final game the sisters matched stroke for stroke, scoring six deuces before Claire finally potted the winning gallery to take the set.

In the second set, Sarah again set out determinedly to take the first game with comparative ease. However, although she was playing beautiful tennis, she was prevented from keeping it up by Claire who had clearly decided she wasn’t going to hang about any longer,. She began hitting magnificent returns and attacks, taking the next six games. It was a delightful match to watch with both sisters using the whole court to great effect. 6/4, 6/1 to Claire.

The Doubles final between the  Vigrass family and the Lumley family 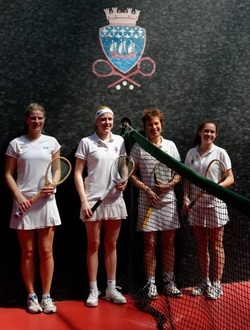 Sarah, Claire, Penny and Tara
A first in women’s tennis, this extraordinary final between the sisters and the mother and daughter.  More excellent tennis for the galleries to admire: the Vigrass sisters were warmed up from their singles match, so Penny and Tara were a little slow getting into the game, losing the first two games.  The third game was a different story, with Sarah and Claire having to work very hard for each point.  Penny and Tara were returning impossible shots and making winners, but sadly, not at the vital point, so they lost this game after a number of deuces.  The fourth game went the same way with Sarah and Claire having to maintain their constant pressure.  Penny and Tara took a breather in the next two games, thus surrendering the set 6/0.  The second set began with the Vigrass sisters hitting the grille and winning gallery repeatedly.  The first two games slipped by, 2/0 for the sisters, but then the Lumleys came back into the game with some wonderful shots that had their opponents scrambling.  Again, alas, the vital point escaped them.  With the score at 3/0 it was time for action, so the next game saw fantastic tennis from all four players.  With the score at advantage to the Lumleys, Tara hit the winner to the grille, a great shot accompanied by a shout of approval from the dedans.  At 4/1, Penny suddenly pulled a calf muscle and could no longer sweep up the shots at the back of the court.  Mother and daughter changed places in true Lumley fashion  –  without batting an eyelid  –  and Tara played magnificently, but could not withstand the combined firing power of the sisters.

It was a most enjoyable match, lovely to watch, excellent tennis from all four players and I hope I can play as well as they do when I’m older.
Sheilagh Owens 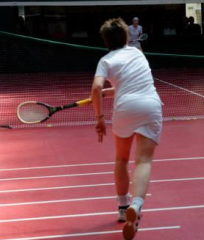 Penny hard at work
Penny started well with aggressive cut shots side to side.  Her length game is definitely her strength and it showed.  She took a quick lead of 1-0 putting the current World Champion on the back foot.  Claire began to move better and levelled at 1 all.  A long third game went Penny's way after an accurate backhand volley to the base of the tambour.  Claire started hitting the ball harder and gaining the advantage in the rallies.  The mix of pace was too much for Penny as Claire took a 5-2 lead.  Penny continued to fight hard and won the next game before Claire won the set. 6/3.  Claire didn't let off in the second set. Her returns were hit with heavy cut as she moved the ball effortlessly from side to side and with that she sealed her spot in the World Championship final. 6/3 6/0 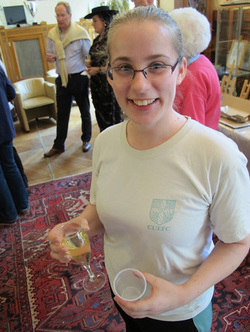 Karen relaxing off court
This match was, on paper, the match of the tournament.  The one to watch, and that it was!  This was a rematch of the 2011 World Championship semi-final.  A full gallery was ready in anticipation for the match.  Karen started well and quickly took a 2-0 lead.  Uncharacteristic errors from Karen mean't Sarah got a game on the board. 1-2. Karen then stepped up the pace and dug deep in each rest to force the error from Sarah.  Karen was unstoppable, hitting straight forces into the dedan and managed not one, but two(!) Winning Gallery Railroads.  She looked to be in control.  Sarah wasn't going to give up the fight but Karen held onto her lead and won the set 6/4.  The second set saw the longest first two games of the match.  Multiple deuces and the crowd knew they were in for a long match, whatever the outcome.  At 1 game all, it seemed the long games had taken it out of Karen as she began to slow down around the court.  That paired with an sprained ankle mean't Sarah took advantage and with more confidence with every shot, ran away with the set 6/1.  Into the third and final set for a place in the World Championship final.  Sarah's continued momentum from the first set saw her go 2-0.  Was this going to be a repeat over the second set?  A long game, with advantage going either way.  Karen just missed out and Sarah now lead 3-0.  For those that have played Karen before will know that she never gives up and it showed her courage as she dug deep and clawed back to 2-3 against the run of play.  Both players now on court well over 2hours and the crowd was enjoying every minute of it. At 4/3, Karen played smart tennis paired with tight serves to lead 40-15.  Two long chases were set with Sarah coming into serve.  It was Karen that just couldn't find her length that let Sarah back into the game and with a lead of 5/3.  An incredible come back in that game gave Sarah the boost she needed to get over the line.  She secured the set and her first ever World Championship final.  A great match, lasting 2hrs 20m minutes of top ladies tennis.
Claire Vigrass
Return to top of page