Women of the Year Awards 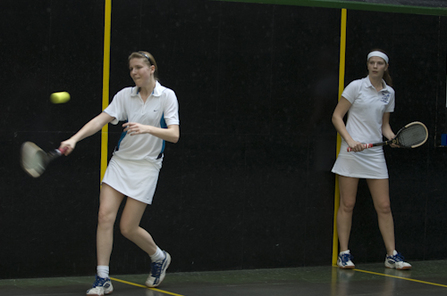 Claire and Sarah in action
Real Tennis is not usually a red carpet affair, but the Vigrass sisters rubbed shoulders with the likes of Helen Mirren, Rebecca Adlington and novelist PD James at the InterContinental Hotel in London on October 22nd.  Sarah and Claire were honoured, along with 400 other high-achieving women, at the Women of the Year Awards to celebrate women’s success and dedication.

“To feel that we two Real Tennis players were up amongst all those sporting and cultural icons was so fantastic”, said Claire, who currently holds every title going in the women’s game.  “It’s a great way to raise the profile of the game, though I didn’t actually get anyone to sign up.  But since quite a few already had Olympic gold medals, perhaps that’s not surprising.”

The sisters did have to run the gauntlet of the red carpet complete with photographers, though Claire claims they put their heads down and ran in to escape the paparazzi and get in to the Champagne reception and lunch.  “There were so many amazing people there, like Doreen Lawrence and the Olympic and Paralympic athletes, it was unreal to believe we were asked to be part of that.“