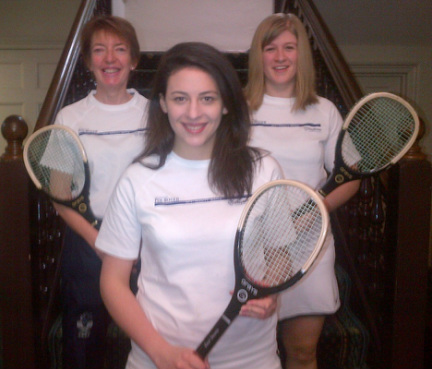 Maggie Henderson-Tew, Madeline Grant & Sophie Dannreuther
The 2014 Varsity match took place over Friday 28 February and Saturday 1 March on the neutral MCC court, which provides such an impressive venue for this match that was first established in 1859, and so is now in its 155th year.

The Varsity Match was, as it always contrives to be, a thrilling event for all involved.  The combination of exciting play, a packed dedans and tremendous hospitality from the MCC and Lord's, was both exhilarating and exhausting, in equal measure. There were well over fifty people watching the first day’s play on Friday and about eighty on Saturday.  Support, while vocal and partisan, was sporting throughout the two day match.

The Oxford Ladies won their Blues’ match by a margin of 5-1.  Their Varsity trophy made a (happily for Oxford) pointless round trip to Lord's and is now back on the glory shelf in the Pro Shop on Merton St.  Oxford was the strong pre-match favourite and had the confidence of three successive years of victory by a 5-1 margin behind them, but the match did not proceed exactly as they had expected…

The surprise came in the shape of the number three player for Cambridge, their Secret Weapon, Sophie Morrill.  It had been a surprise to see her name on the Order of Play.  Sophie who?  She had no results on RTO and it transpired that this was pretty well her second–ever match; her first being the play-off for the Blues team.  She improved about 15 points during the course of her two set win and showed admirable court craft for one so new to the game.  Her backhand cross courts shots and her volleys were of a very high standard and she is a fine prospect for the future. She could go a very long way indeed in the women’s real tennis world, if Lacrosse England and her lawn tennis allow her sufficient time to develop her tennis.

Sophie Dannreuther’s win at second string for Oxford was also a notable success.  Her win meant that in her two appearances for the Blues in 2012 and 2014 she has conceded only one game in four sets of singles.

Huge credit must go to Kate Kirk, the Cambridge Captain, and to Kees for a vigorous recruitment campaign, which has brought lacrosse, squash, lawn tennis and other players into tennis.  Although the early timing of the Varsity match in the year means there are not many university weeks in which to spot, encourage and develop talent, it did result in an unprecedented play-off involving 16 people for the four slots in their Blues side.  It is a great legacy for Kate to leave, as she hands over to the next Captain, and bodes well for Cambridge in the next few years.  It is great for the game to have new talent, but slightly less good news for Oxford to have the prospect of much-strengthened Cambridge teams in the future!  Thank you to all the Cambridge ladies this year.  They played hard and fair and were great company.

The Cambridge Men played just as well as Oxford had feared they might.  Despite heroic efforts from all the Oxford players, the significantly superior handicaps of each of the Cambridge players told in the end.  They swept through the match, with surgical efficiency, winning 6-0, and not even allowing Oxford a set.

The Cambridge teams this year impressed, surprised and challenged Oxford, in equal measure, and the match was played in an appropriate spirit of rivalry and respect.  The spirit of the event was exemplified by the exhibition match between the third and fourth men’s singles rubbers on Saturday, in which there were current and past Oxonians playing alongside Cambridge men on both sides of the court.

Once again, the MCC and Lord’s organised the real tennis Varsity Match superbly well.  At the concluding black tie dinner, held in the magnificence of The Long Room, tribute was paid by the speakers to the continued sponsorship of the event by Pol Roger, for which all involved in the Varsity Match are most grateful.  Additionally, Audrey Davies, the Oxford Ladies’ Captain, and Euan Campbell, the Oxford Men’s Captain, thanked Neptune for its generous support of real tennis at Oxford.

Euan then stole the entire show by reciting, with great dramatic effect, a poem he had written for the event, which was rapturously received by the assembled diners:

A Day in the Life of an Oxford Real Tennis Player

His alarm goes off and the day begins,
He knows he's hung over 'cause everything spins.
"What day is it?" he asks, as he stretches to bend,
His wrist holds the answer, a stamp from the nightclub, Park End.
A Thursday! A Thursday! Of that he is sure,
As he picks up his things and he moves to the door,
When "bing" in his pocket, he feels a small surge,
It's an email from Andrew - a free court has emerged.
"Sign me up!" He replies, he jumps at the chance,
'Cause he wasn't organised enough to book three weeks in advance.
Into college he arrives with his racquets on show,
When a fresher appears and is keen to know,
"What racquet is that? Is it squash? It looks heavy!"
He's heard this all before and his responses are ready:
"It's Real Tennis, yes, as opposed to fake tennis, before you try to be funny,
You can play all-year round, be it winter or sunny."
"But what are the rules? Is it more precision or power?"
He says, "I'm going to have to stop you right there to save us both the next hour."
He leaves the poor fresher and sweeps up his books,
And jogs to the court, his racquets receiving yet more quizzical looks.
Into the pro shop he comes, it's the usual throng,
There's Andrew, Ron Mutton and Craig, looking strong.
When a parcel arrives, delivered by a man with a goatee,
Craig puts down his Olives, his muscles bulging with protein,
It's for Craig! It's new shoes! And Craig murmurs just audibly enough,
(And I quote): "That's the stuff, Craigy-boy, hoo-hoo-hoo, that's the stuff!"
Five minutes are left 'til it's time to get going,
Just enough to chat with the pros and watch some immaculate sewing.
Then it's onto the court for an hour of fun,
An escape from the library and the daily humdrum.
And he'll aim for the grille, he give his best, he'll try hard,
He'll say, "Good shot, mate", when it falls for a yard.
And when all's said and done, and he's left Oxford behind,
He'll look back oh so fondly, as he reflects on his time.
So when his court time is up and the next players are due,
He'll collect up the balls and hand over a few,
And though he might not know them well, perhaps not even their name,
He'll mean it when it says, "Hey, I hope you have a good game".

We had the bonus this year of Mike Gatting, the President of the MCC in its 200th anniversary year at Lord’s, as the final speaker of the evening.  He has, he said, played real tennis at Lord’s, the Oratory, and in Melbourne with David Gower, but insisted that he is a ‘dreadful’ player.  He entertained The Long Room with a succession of anecdotes (mostly scurrilous stories about Ian Botham), and was generous in signing very many menus after the dinner.

Great thanks are due, once again, to Brian Sharpe, who managed the match so ably on behalf of the MCC, to the Lord’s Professionals, Adam, Chris and Mark for their marking stamina and excellence, to the Lord’s catering team who so ably, and deliciously, looked after us, and, of course, to all those who came to play, watch and enjoy the tennis.