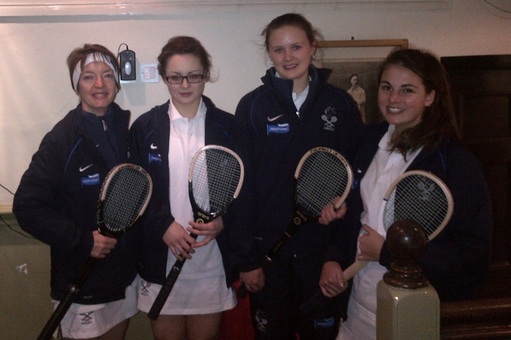 The Oxford women’s players were stronger on paper this year than each of their opposite numbers on the Cambridge team, which had unfortunately been hit by injury.  Emma Samir-Aly, Emily Brady (C), Karen Pearce and Imogen Whittam all played considerably better than their respective handicaps and performed with the highest standards of sportsmanship.  They were tough competitors and generous opponents.

The story of the Oxford women’s team this year has been one of continuous improvement for Audrey Davies (worthy recipient of a current LRTA bursary), Emily Scaysbrook and Flora Olcott.  These three players have improved, in aggregate, over 40 handicap points since October, with Flora progressing strongly from a standing start.  All had strong match records leading up to Varsity, and this showed.  They won their rubbers with the loss of only one set between them.   At one point in the match, there was a run of 25 games of which 24 went Oxford’s way.

Flora was first on in the singles and, after a nervous start that saw her lose the first set 3-6, she recovered to win the next two sets in tremendous style, powering through them both without losing a game.  Audrey secured the second rubber for the Oxford team, beating a much higher handicapped opponent in straight sets, with the loss of only one game.  Perhaps the most memorable shot of this year’s Varsity, from the Oxford women’s point of view, was a remarkable low volley of Audrey’s.  She sprinted across court at the hazard end to return, at full stretch, a heavily-struck main wall boast that was heading for the floor under the winning gallery.  Her ball shot over the lowest part of the net to land better than a yard.

With the momentum of the match now firmly with Oxford, Emily then took to the court.  For those who have never seen Emily play, it is fair to describe her style as ‘pugnacious’ and this was a characteristically fast-paced, ‘no prisoners’ performance.  Although her opponent, the Cambridge captain, returned many balls as hard as they were struck at her, Emily powered-out the final set, winning 6-5, 2-6, 6-2.  The final women’s singles match saw returning captain Maggie and her opponent repeating their 2012 encounter.  In a closely-fought and fast-paced match, Maggie was edged out in a couple of crucial games, losing 3-6, 5-6.  At the close of the first day’s play, the Oxford women were 3-1 ahead, needing just one more win to retain the Varsity trophy.

The doubles started with a win from the well-established second pair of Emily and Audrey - but they made the dedans sweat for it.  Due to play in the Mixed Lacrosse Varsity match in Cambridge just after noon, Audrey was keen for a quick win.  With a 6-2, 5-2 lead, Oxford seemed to be cruising to a comfortable and fairly speedy victory until a spirited comeback from their opponents, Emily and Karen, brought the score to 5-5.  Audrey’s repeated glances at the clock showed how anxious the pair had become.  After multiple advantages to either side in turn, Emily hammered a cross-court shot low on the tambour to win the set, the rubber and the Varsity Match for Oxford.  Audrey rushed off, managed to get the last possible train from King’s Cross and returned in time for dinner in The Long Room!

Although the Match win was secure, Flora and Maggie played their doubles match against Emma and Imogen with intensity and after a tight first set, won 6-5, 6-1.  Maggie, with a score to settle after the singles, had the satisfaction of hitting the final shot of the women’s match, for the third year running.

The women’s team send a huge ‘thank you’ to all their supporters, particularly to the men’s team, which offered vocal and energetic dedans encouragement for the entirety of every rubber played.  The women were, in turn, delighted to support the Oxford men, who had a magnificent victory, having come back from a 3-0 deficit to win their match 4-3, after a deciding doubles of the highest quality tennis.

At the post-match dinner, so splendidly hosted, once again, by tournament sponsor, Pol Roger, tribute was paid by both winning Captains, and by Simon Stubbings, as winning club President, to our gallant and gracious opponents, to the tournament organisers and to the sponsors; particularly to Pol Roger for their continuing sponsorship of the Varsity Match and to Neptune’s support of real tennis at Oxford.  We are enormously grateful to Neptune for its continuing sponsorship of the Oxford men’s and women’s student teams and are delighted that such success is flowing from this relationship.