The entry form for the next LRTA Junior Tournament 24th to 25th November 2012 at Radley is now available:  click here. 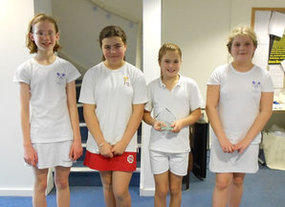 This tournament took place at Radley on 27th November. A staggering 23 players entered – a steady upward trend over the last few years under Jill Newby’s stewardship!  Players cover a wide age range – this year from 10 to 19 – and an even wider range of handicap and experience on the real tennis court with a couple of the younger entrants having less than a handful of matches (friendly or otherwise) under their belt. Players are divided into groups broadly by handicap – this year we had 6 groups of 3 or 4 players – with the winner of each group being presented with a trophy.

This group kicked off at 8.30am and featured two girls from Radley (Eleanor Backhouse and Izzy Taylor) alongside Alice Messer from Moreton Morrell and Artemis Paterson from Cambridge. Artemis had not played a competitive match before and dad Peter entered her with an estimated handicap.

Izzy, the youngest player in her group, whizzed around the court as if there was no tomorrow – reluctant to concede chases of any kind. Artemis played a steady game and hit the ball very well when involved in a ralley, but struggled a little with anticipating some of the bounces on the Radley court. Alice – at 85 the best handicap in this group – showed her match practice by clever leaving of chases and aiming to dominate the service end and is a strong hitter of the ball off the floor. Eleanor showed gritty determination and retrieved some unbelievable backhands at the service end from tight shots playing very effective cross-courts into the tambour corner. In the end, Izzy’s boundless energy around the court and the rapid improvement she showed in her play from game to game, earned her the top spot in this group by defeating Alice 6:3 in the final match (stylishly winning the last point with a dedan force). 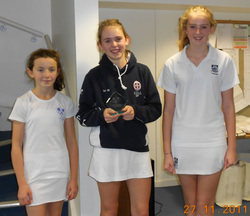 Next up, Katie Pearson from Radley, Rebecca Nicholson (Canford) and Anna Willis (Seacourt). As the group only had 3 players, matches were first to 8 games. This group was the closest in handicaps, with two players off 80 and Katie off 81.6. The two teenagers (Katie and Rebecca) are very strong hitters belying their 80odd handicaps and used their power to put Anna (aged 11 and the youngest of the three) under pressure to play shots quickly. Anna defended valiantly and showed good retrieving skills. Katie won the group by beating Rebecca in the decisive match 8:6 – the second local player to take top spot. 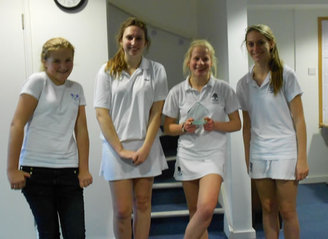 Group C
This was another close group with the variation in handicaps between 69 and 73. Lottie Fullerton and Hannah Doyle from Canford, Philippa Twohig-Howe from Moreton Morrell and Georgie Willis from Seacourt made up this group. First up were Lottie vs Philippa with the match going to the wire at 5:5 40all with Philippa winning the final point. Philippa stayed on to play Georgie and, having got used to the court in her marathon game before, made the most of this, visibly improving in her reading of the ball from game to game. In the next game, Georgie took advantage of the “follow-on” – apparently an advantage in real tennis unlike in cricket – dominating the service end and playing very tightly to secure the match against Lottie. The next match was between the two Canford players, and was a close as expected from two players knowing each other well, with Lottie winning 6:5. The final match, and the effective final of the group, was Philippa vs Hannah. Hannah, despite being the smaller in stature, employed a whipping style of hitting the ball to increase her shot-power – and managed to do so without losing accuracy in her timing. The match started closely going to 3all, but Hannah took the next 3 to win the group with another shot straight into the dedans on match-point.
Return to top of page 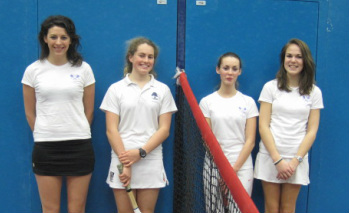 Group B
Group B featured Madeleine Grant from Moreton Morrell, Suzy Peters from Canford, Jess Bethnell from Seacourt and Carolina van Soest from MURTC. Carolina has only recently taken up the game again after playing some years ago at Canford and her unbridled enjoyment at being back on a court showed, perhaps to the detriment of a little grittiness on this occasion. Jess’s movements and racquet-control demonstrated her other love, ballet-dancing, and she served a fearsome railroad as her first choice serve. Madeleine made the most of height and reach, employing powerful volleys and dedan forces. Suzy, the youngest at 16, was very mobile around the court and displayed a match temperament that was exemplary. Results in this group were extremely close – with 3 players ending on 2 wins each – and Suzy taking the top spot on games won.

Group D was won outright by local girl Charlotte Hoskin who was very quick about the court, played the ball well off the back wall and was consistent in all her matches. Hattie Sherman and Felicity Sargent (both Moreton Morrell) had a good match with Felicity volleying well however, Hattie’s serve was very strong and one her many quick points. Matilda Rhodes from Oxford played very gamely throughout and should be congratulated for her good efforts as she had only been on court 3 times before entering the tournament. 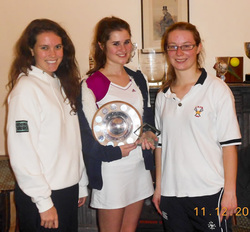 This group had the three most experienced players: Tara Lumley, Jess Garside and Lucinda Pigott, all with handicaps in the 40s.  The girls fought fiercely, with some excellent matches over nearly two hours of play.  At the end, Jess came out the winner having beaten both Tara and Lucinda.


Overall, this tournament was a joy to watch, on account of the number of entrants, the great spirit displayed by all players and the variety of home-courts the players originated from.  With youngsters like these, the Ladies’ game can only go from strength to strength – our thanks go to all contestants, Jill Newby for organising, and the Radley pros and one Mr Steve Ronaldson for marking the matches and keeping the groups running smoothly. Thanks also go to Alex Garside not just for getting the names of eligible players from the various professionals, but also for coming along on the day to watch proceedings and help with the organisation.  Finally, thanks to the anonymous sponsor who not only enabled the LRTA to make this tournament happen, but also let us provide special shirts to all contestants as a memento of the occasion.