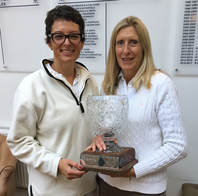 Sarah Sullivan and Carolyn Armstrong-Smith
This year the tournament was in the encouraging position of being oversubscribed!  With entries from 10 different clubs we were in for an exciting tournament.  In addition we had several players for whom it was their first tournament and it was good to see players returning after long term injuries.  Lucy Davies playing with Candida Nicholls were Group 1 winners with Chantelle Harding and Pam Tomalin as runners-up.  There were many close matches in Group 2 with three couples having 2 wins.  On count back, Sarah Sullivan and Carolyn Armstrong-Smith were group winners and Sarah Hughes playing with Annabel Wyatt runners-up.

The first semi-final saw Lucy and Candida versus Annabel and Sarah.  This was a good match that went game for game until 3 – 3 with some great serving by all players.  Eventually some strong returns of serve with angled and tight shots helped Lucy and Candida take the set 6 - 3.  In the second semi–final Pam and Chantelle were up against Carolyn and Sarah.  This was another good match again going game for game with Pam hitting some clever returns.  However it was Carolyn who produced some excellent retrieving plus hitting the winning gallery and the grille very effectively that took them through with a 6 – 3 win.

The final first to 8 was a smashing game, with clever shots into the galleries to gain the serve by both pairs.  It was not until 4 – 4 that Carolyn and Sarah started to stretch out a slim lead coping well under pressure from Lucy’s cunning angled shots and Candida’s attacking play to get to 6 - 4.  Even though Sarah served well Lucy continued to slither her returns down onto Sarah’s backhand either forcing an error or achieving a chase but Carolyn and Sarah just kept ahead, the match reaching 7 – 6.  More lengthy rallies ensued with Carolyn’s consistency in particular winning through for her and Sarah to take the set 8 - 6.
​
Many thanks to Andy Lyons for all his marking throughout the day.
Jill Newby 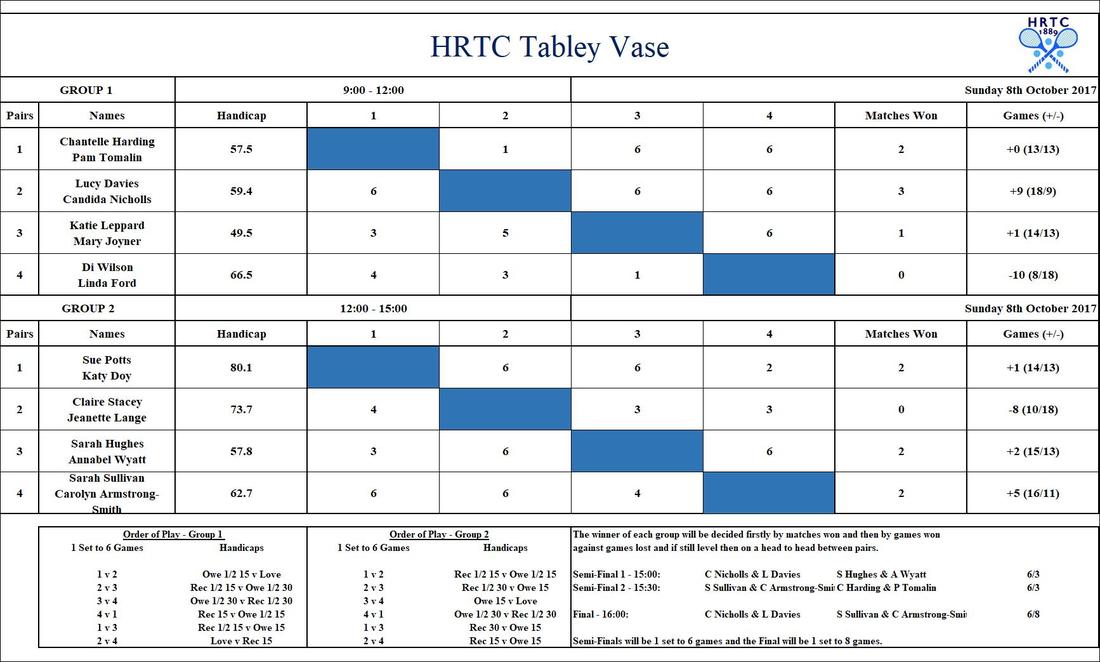