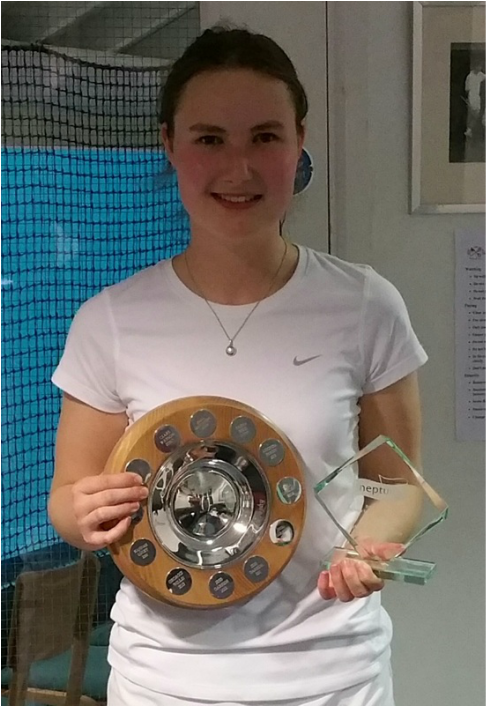 
With this year’s tournament we had 8 new faces who had not entered the tournament before, 5 of them coming from Wellington College with just a few games under their belts. 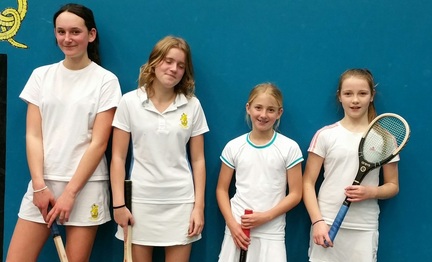 Martha v Maisie was the first match of the day. Martha quickly got into her stride racing to a 4 – 1 lead by hitting some super cross court returns and strong serves.  Maisie began to serve to a better length to take the next game and nearly the next but Martha produced some good footwork with her return of serve to regain the serve and control the game from the serving end and take the set 6 – 2.  Olivia and Steph came on next.  Both girls liked attacking the ball but Olivia had a soft bobble serve which put Steph under a lot of pressure and she over hit a lot of return of serve to help Olivia reach a lead of 5 – 2.  At this point Steph hit 3 shots into the dedans to make it 5 – 3 then Olivia’s good serve helped her take the set 6 – 3.  Olivia v Martha saw both players serving well and keen to volley the ball.  This match went game for game until 3 – 3 with Olivia eventually taking the set by having greater accuracy at hitting balls into the corners of the court.  Steph v Maisie, two attacking and energetic players saw Steph take a 4 – 2 lead but Maisie played back into the game with some very good serving and cracking shots into the corners to win the set 6 – 5.  Martha v Steph was a much closer game than the score of 6 – 1 to Martha suggests.  Martha again served well throughout but Steph volleyed well and saved several shots that were going into the dedans.  Olivia v Maisie saw Olivia’s good length serve cause a lot of trouble and even though Maisie played consistently Olivia took the set 6 – 3.  Group winner was Olivia and runner-up Martha.

​This group’s matches were totally dominated by whoever had the strongest serve.  Katie and Molly both played well when given the chance.  In her match with Sophia, Katie hit a beautiful shot into the grille.  The match to see who would be top of the group saw Sophia v Jess battling it out.  It was a very tight tussle with Sophia hitting some lovely backhands bending her knees and getting behind the ball.  Meanwhile the score reached 5 – 5, 40 all and Jess hit another great serve to take the match and be the group’s winner with Sophia as runner-up.

Group C Players
​
Group C:  Felicity Sargent, Isolde Taylor, Marina Eastwood, Ella Dow
​
Felicity v Isolde, what a tussle.  Felicity battled bravely only giving away 19 points handicap!  Both Issy and Felicity are much improved players with their movement about the court and control of their shots.  Issy retrieved well throughout the match as Felicity hit some beautiful shots into the corners of the court.  Some brave volleying at 5 – 5 helped Issy take the set 6 – 5.  In the match between Ella v Marina we saw Ella take a quick 3 – 1 lead but Marina kept her composure, began to read the ball better and it was 3 – 3, 4 - 4 then 5 – 5 when Marina raced away with the final game finishing with a flourishing shot into the grille.  Marina stayed on court to play Felicity.  This time Felicity gave away 20 points.  This match went game for game right up to 5 – 5 with Felicity hitting some beautiful balls off the back wall.  Meanwhile Marina continued to scramble well and at 40 all a great serve by Felicity saw Marina just manage to scrape the ball up but with a bit of topspin which just helped it to bounce into the dedans and give Marina the set.  Next on court came the inexperienced Ella v the more experienced Issy. Whilst Ella hit some fabulous volleys and good cross court drives, Issy retrieved and served well and managed to take the set 6 – 2.  Ella stayed on court to play Felicity and by now she was reading her opponents shots and the court much better. Giving a mere 20 points handicap away Felicity played patiently to take the set 6 – 3.  The final group game was school friends Issy v Marina.  This went 6 – 2 to Issy and was much closer than the score suggests. Issy was strong and good at taking the ball off the back wall.  Marina continued to retrieve well but has yet to learn a serve that will put her opponent on the back foot.  Group winner was Issy and Marina was runner-up.

The first match of this group was Minty v Harriet.  Both girls played aggressively and were keen to volley.  The match went game for game until 4 – 4 when Harriet start hitting sharply into the corners and brought off a 6 -4 win.  We then saw Hannah pitted against Anna.  There were some good rests with Hannah taking the 4 – 1 lead.  Anna came back to 3 – 4 with some good serves and shots into the dedans but Hannah took control again and the next couple of games plus the set 6 – 3 with some accurate shots into the corners.  Anna stayed on court to play Harriet.  There were some good rests in this game but Anna’s good length serve gave her the edge and she won the set 6 – 3.  Minty v Hannah was a terrific game.  Hannah was giving away 15 points.  Minty had become used to the court and raced to a 5 – 1 lead.  Hannah clawed her way back into the game with some great shots into the corners and some very tight serves and we were at 5 – 5.  A superb rest with a half volley by Minty took her to match point and with a lovely shot to the base of the tambour gave Minty the match.  Both girls had held their nerves well.  Minty stayed on court to play Anna which was another tight game. Some excellent serving by Anna kept her in the game until 4 – 4 then Minty produced some excellent volleying to take the next 2 games and the set.  The final group game saw Harriet v Hannah with one match each, the winner would go through to the Knock Out stages.  Hannah was giving away 10 points in this match.  Harriet’s consistency was just sufficient to keep her ahead in each game as Hannah tried to get back to level terms and Harriet won the set 6 – 3. 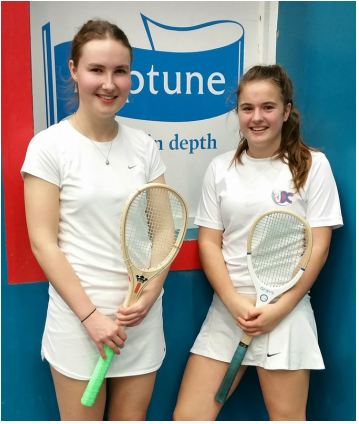 Before the Final
​Knock out stages:  Throughout the tournament we had a maximum ruling of rec/owe 20 points handicap.  Issy 75 v Martha 96 was the first contest with Issy playing consistently to take a 4 – 0 lead.  However, Martha with her good footwork shaped up to hit the ball well and was suddenly making all the good shots and it was now only 4 – 3 to Issy.  Issy kept her cool, hit the ball into the corners without over hitting and came through 6 – 3.  It was Marina 82 v Olivia 92 next.  Olivia played consistently and served well to take a 5 – 1 lead.  Marina hit some lovely volleys to snatch another game but over hitting on her serve always gave Olivia the chance to step in and hit some lovely cross court drives and so winning the set 6 – 2.  Jess 86 v Harriet 79 came on next.  At the beginning it was a very even game with Harriet placing some lovely shots to the base of the tambour and it was 2 games all.  With some wonderful retrieving by both girls the next 3 games all went to 40 all with Jess taking each game and take a 5 – 2 lead.  Jess then took the final game with some excellent returns of serve. The final quarter final saw Minty v Sophia playing off level.  Both girls moved well about the court, liked to attack the ball as well as being good at volleying.  Minty had the slight advantage of having played in the morning and raced to a 3 – 0 lead. Sophia managed to win a game but after some great rests Minty took a commanding 5 – 1 lead.  Further great rests were played out, a couple of mistakes by Minty and it was 5 - 3 and in spite of Minty having match points at 40 all in the next game Sophia bent her knees well to dig out some great serves by Minty and it was 4 – 5.  Minty then cranked up the pressure and with some very energetic volleying took the next game and the match 6 – 4.
The first semi-final:  Issy 75 v Jess 86.  This game saw some superb retrieving and excellent shots by both girls.  The match went game for game from 1 -1 right through to 5 – 5, Jess gaining lots of advantage with her strong spinning serve.  At 30 all in the final game Issy had already laid one good chase but then laid another of ½ Yard.  With some calm play this was enough to win the match and take her into the final.  The other semi-final saw Minty 85 v Olivia 92.  Olivia’s great run in the tournament came to an end coming up against the energetic strong and rapidly improving Minty.  Whilst Olivia put up a brave effort Minty’s shots were too consistent and powerful for Olivia and Minty won 6 -1. 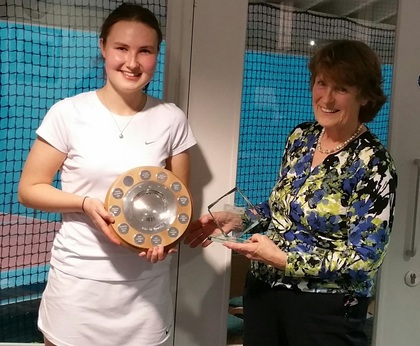 Jill Newby with the winner


​The Final, Issy 75 v Minty 85, was an 8 game set.  Playing beautifully Minty raced to a 4 – 0 lead also with the benefit of Issy hitting cross court on to Minty’s very strong forehand.  Issy managed to claw back a couple of games but Minty’s aggressive, consistent play, and especially her wide returns of serve on to Issy’s backhand kept her ahead to win the final 8 – 2.  Minty is to be congratulated on the rapid and thoughtful progress that she made throughout the day, having probably only played about 5 times before.  Issy, whilst no doubt disappointed to lose, should be proud of the progress that she has made with much improved footwork and with the placement of her shots. 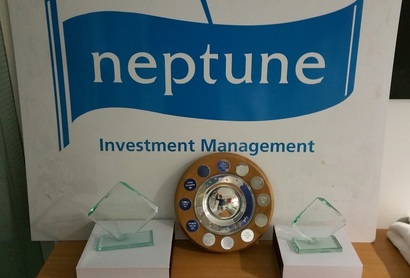 Throughout the weekend we saw some excellent tennis with all of the girls playing better than their handicap by the time they came to play their last game.  Although their playing range was between 69 and 99 all the girls moved well about the court and were trying to place the ball in rallies.
​
Many thanks to Radley for allowing us to play on their court, to Lesley Ronaldson, Zac Eadle and Mick Dean for kindly marking the matches and of course a big thank you to our sponsors Neptune.

(Many thanks also to the organisers Jill Newby and Alex Garside.  Ed.)
Return to top of page