Many thanks to Tim Tomalin for these great photos.

A long first match which, if we wanted to finish anything anywhere near on time, had to be curtailed to 1-all in the second set and 4-all in the third.  The ladies fought hard and were unlucky not to triumph.

The second match provided the best tennis of the day (in terms of skill if not competitiveness!) and was a delight to watch.  Lovely to see Juliette back on court and what a great team she and Jill made.  Some great retrieving and teamwork as well as attacking play from both teams  -  Colin with his devilish left-handed serve countered by Jill's great length serves tight into his left-hander's backhand  -  and a deserved win by the ladies.

In the third match, the handicap had a profound effect  -  receive 15 may not seem much, but if the "givers" don't win the first point, it's hard to get back.  The Dedanists were 5-2 up in the second set and Anne and Diane were coming back strongly when Richard lobbed the final shot into the winning gallery  -  a great way to conclude the match.

The Dedanists were the hosts of the day and Peter Flood provided a delicious lunch, helped by Pam, the LRTA captain in the final preparations.  How lucky we are to be able to use a wonderful venue like Hardwick for some of our matches.  Thanks to all those involved for a lovely day.

This annual fixture was curtailed to just three matches when sadly some LRTA members were injured and a BRTC player went sick.  Nevertheless the games were very entertaining.  It shows the depth of talent within the local LRTA ranks when three of the team, who hardly play, put up tremendous performances.

First match was Lucinda Pigott (playing for LRTA) against David Whittaker.  Lucinda is now at Edinburgh university and playing hockey five days a week but she stepped on to court and announced that she was not to be written off with a wonderful boast off the roof into the dedans in the first game.  From then on David exerted his will and power and ability to bounce the ball into the dedans on a regular basis to take the first set 6-1.  However Lucinda having played her way into the game was not going to let him walk all over her and with the game being played at an ever more ferocious pace went toe to toe with him until almost the last point but David took the second set 6-5 and the match.

v Chris Willows and Joe Morris.  Ann too had hardly played this year and Chris and Joe proved too strong for them with Joe targeting the grille and Ann, thinking a point had been lost,  didn’t see it come back over the net until her captain shouted from the dedans ‘run’!!  Alas too late.  Chris and Joe ran out winners 6-3 6-1.  The score belies the fact that many of the games went to deuce.


Many thanks to Angela for the photo as well as the match report.

The first match between Elvira and Robert was a great tussle with lots of long rallies and some super volleying by Elvira with the match finishing at one set all.

Another close encounter was the 2 Sarahs v Ian and Peter.  Sarah McG concentrating hard was making some excellent returns of serve and volleys and Sarah S was consistent throughout but the chaps extra pace gave them the edge for a straight sets victory.

Sue Haswell  went 5 – 2 up in the first set serving particularly well then Jamie Bebb went up a level to pull back and take the set 6 – 5.  He continued to play extremely accurately hitting some excellent angles and width shots as well as constantly retrieving shots which, if left, would have given Sue a 2 yard chase.  Eventually Sue ran out of ideas and Jamie took the 2nd set and the match 6 – 3.

The Ladies were now 2 ½ to ½ down so it needed a pair of Davies to come up to the mark!  No prisoners!  With Lucy’s experience and granddaughter Audrey’s attacking play and punchy volleys they put in a fine performance to overcome an injured Nick Faure and recovering-from -tummy-bug Malcolm Thorp 6 -2, 6 – 2.

This left Charlotte Barker to achieve a win for the LRTA to bring the match result to a draw.  Charlotte played beautifully (far better than her handicap!) being very consistent against a weakened Malcolm Thorp who produced some good serves but found the handicap and Charlotte’s consistency too big a hurdle to overcome.  Charlotte winning 6 – 2, 6 – 1 and the friendly match resulting in a draw. 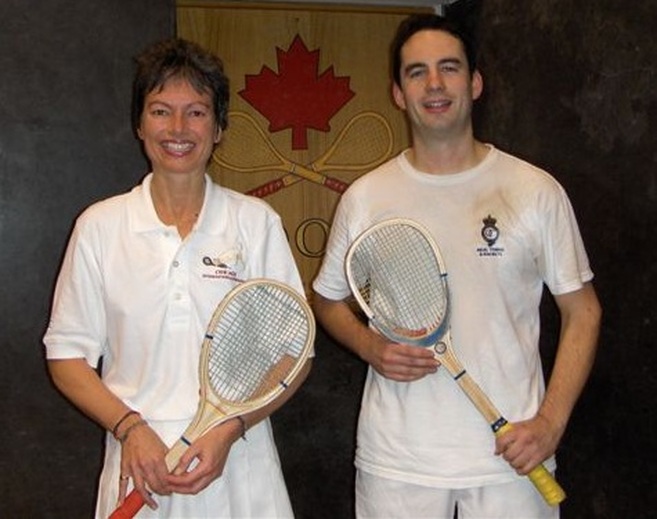 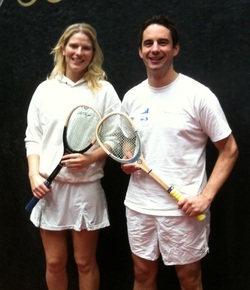 The Ladies won by a whisker, and a torn ham-string, in this year’s match against the Tennis and Rackets Association.  This is always a keenly fought match, with the LRTA defending the honour of the Ladies’ game, and this year was no exception , except in the overall result where for once the Ladies won the day, though not perhaps in the way they’d have chosen.

Five singles matches were played, with two excellent three-setters by Andrina Webb and Freddy Adam as the essential victories.  Andrina - against Michael Rowan - was handicapped with a nasty burn on the palm of her hand, and it took her some time to get into the attack.   Having been up 5/4, she just lost the first set 5/6, but then starting producing shots with width and looked in control of the game.  The second set went game for game, and this time Andrina retrieved and served well at 5/4 up to take it.  In the final set, starting at 3 all, things reached 5 all, 40 all, with a few sweaty palms in the dedans.  But with a 6 yard chase to beat, Michael found the net cord and his ball fell just short, to let Andrina take the match 5/6, 6/4, 6/5.

In the second full victory, Freddy Adam against Corin Jenkins had a sluggish start and went 3 – 1 down.  Then she produced a string of her usual great volleys and drives to take the first set 6/3. In the second set Corin started serving better and hit with far better width to take it 6/4.  Starting at 3 all in the third set, some further attacking play by Freddy and some dream backhand volleying saw her reach 5-3.  Corin held on to take the next game, but some good serving by Freddy and some loose returns by Corin saw Freddy quickly snatch the final set and the match 6/3 4/6 6/4.

The two losses for the LRTA were both closely fought and could have gone the other way.

Louise Mercier against Ben Rowan, playing level, lost the first set in what looked a whitewash but was far from that, with Louise picking up some excellent chases off the back wall only to hit some rather loose shots.  Reverse psychology by the team managers offering her Owe 15 was refused, and spurred (infuriated?) Louise went on to win the next 8 points and go 3 – 0 up, and then with great serving reach 5/4.  But over the next two games, Ben came out with excellent retrieving and serving to claw back the set and the match, 6/1, 6/5.

Sarah Vigrass against Chris Herbert was a lovely game to watch, with some beautiful shots cut into the corners by both players.  In spite of good attacking play and retrieving by Sarah, Chris’s extra sharp length and 2 consecutive shots to the winning gallery saw him take the first set 6/3.  The second set was similar, with Sarah taking the first game and then Chris embarked on a run.  Sarah began to attack more, but with Chris’s continued aggression and hardly any errors, he finally took the second set 6/3.

So two contests won, two lost.  Alas, the fifth match, between Eliza Gwynne and Asif Qasim, had an unhappy conclusion.  Both players have a great eye for the ball and really attack their shots.  It was game for game in the first set, reaching 5 all, 40 all, for Asif to take the final point and the set.  The second set saw more of the same, until at 2-1 to Eliza, she hit a cracking forehand cross-court, to see Asif do the splits and end up with what was later diagnosed in hospital as a torn hamstring: a sad end to a most entertaining match.  But strictly speaking, the injury gave the LRTA the victory, though no one wants to win a match that way.

Our thanks to Andy Lyons for marking, and Michael Rowan for his behind-the-scenes work and support for the LRTA. 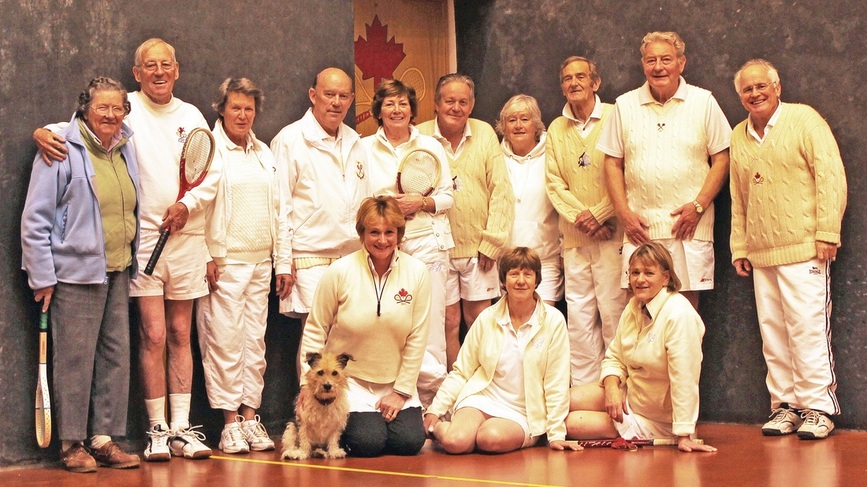 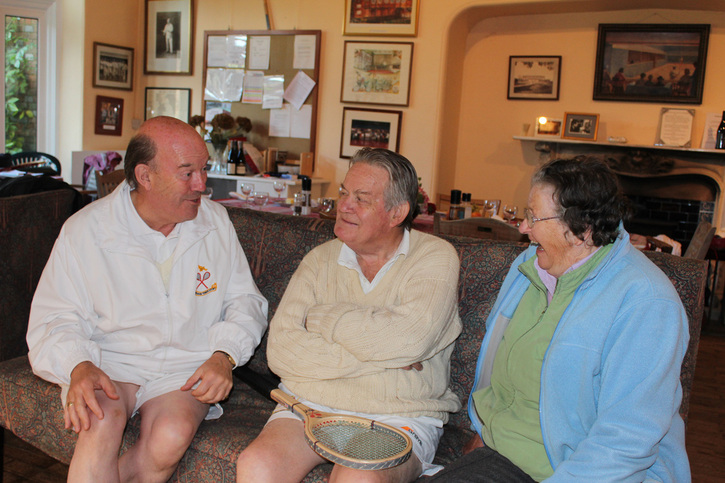 Peter Swiss, David Godfray and Sheila Macintosh appreciating the atmosphere of the day 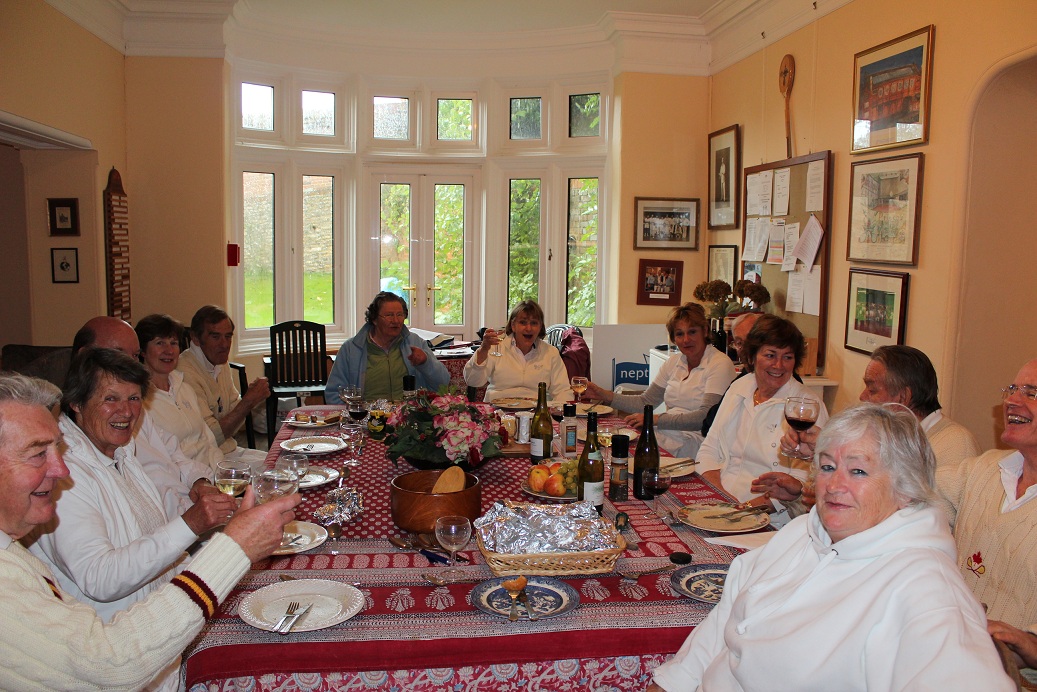 Enjoying the excellent lunch provided by Pam Tomalin, Katy Weston and Lucy Davies in the lovely setting of the Hardwick dedans
Return to top of page