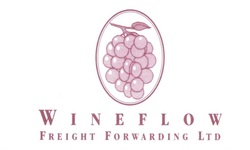 Many thanks to Linda Fairbrother for all the photographs 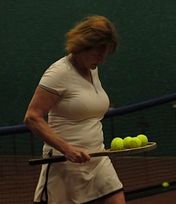 Sarah Brownlee
As usual, probably the most entertaining aspect of the Masters tournament was comparing knees away from the court: not of course for their knobbly beauty but for respective levels of agony/stiffness,  or operation details.  It was estimated that at least seven knees were in low repute with their owners (and who knows how many more deficient patellas were being denied, in alt.fact fashion?).

The other talking point was that our Sponsor – Carolyn Armstrong-Smith of Wineflow – had obviously been consuming too much of her products, as she had mistakenly flown to South Africa for the weekend, instead of driving to the Oratory. She was toasted and thanked in absentia.
​
Singles Masters
The matches started on Friday, with no surprises, as all the first round matches – played scratch – went to the lower handicap player in two sets.  On Saturday morning it began to get interesting, with a fierce fight between Jo Miller and Gabrielle Smart-Fourquet.  Jo took the first set 6/2, Gabrielle took the second 6/2; and it went to the third.  Jo managed to hang in to win it 6/3, but it was a tremendous match which gave all the spectators great pleasure – apart from Katy Weston, the Tournament organiser, whose match schedule was blown out of the water by a tussle lasting two and a quarter hours.
​
Even worse (from Katy’s point of view) was the next match, which was also a tough three-setter, full of long energetic rests (‘Oh no!’ mutters from Katy) and excellent dedans forces from both Sarah Brownlee and Linda Sheraton-Davis.  It ended with a third set going to 5/5, but Linda scraped the victory, 6/5.

By now it was lunchtime, with only two matches completed.  Luckily for Katy, the rest of the Saturday players took pity and got on with the job.  Katie Leppard was far too strong for Annabel Wyatt, and efficiently denied her any games at all.

Linda Sheraton-Davis
Linda Fairbrother had a tight game against Lucy Hutchinson, with nearly every game going to deuce, and Lucy fighting back in both the first and second set from a number of games behind.  But Linda just managed to edge both sets and win 6/5, 6/4.  Candida Nicholls against Jo Miller saw some great serving by Candida.  Jo hit back well with good tactical placing but Candida was reading the ball well and kept it away from Jo’s reach, winning 6/1 6/1.  So by the end of the second round, Katy could breathe again as we were only an hour or so adrift.  On to the quarter-finals, with Linda Sheraton-Davis first up against Tiff Fielden.  In the first set, Linda kept in touch up to 4/3 with some great high sidewall serves and good chases.  But Tiff was doing an excellent job of denying Linda a clean shot most of the time, and the next game turned out to be crucial.  Eight deuces, most of them with Advantage to Linda, but in the end Tiff got the final point to go ahead 5/3.  From then on, although Linda never gave up and continued to play very well, she was never allowed another game.  Tiff through, 6/3 6/0.

(By now in the dedans, the subject of knees having been exhausted, talk turned to bad shoulders from falls, inability to turn one’s head fast enough, and the dangers of lawn tennis courts….  It was astonishing how we would all have had unending triumphs on court were it not for our respective ailments…) 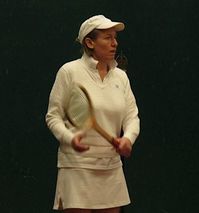 Katie Leppard
​
​The quarter-final game between Katie Leppard and Lorrayne Gracie was much anticipated, but Lorrayne managed to block Katie’s big weapon – her railroad serve – by keeping her at the Hazard end for at least two-thirds of the time.   Once there, Katie tried to lay chases to somehow win back serve, but under the pressure, this led to unwonted errors in her returns; and her ground strokes were also jumping up and making things too easy for Lorrayne, who took the first set 6/1.  In the second set, Katie calmed down, aimed down the sidewalls, and got a few more sessions on serve.  She went ahead 3/2; but then she was banished back to the Hazard end again, and Lorrayne made all secure, to take the match 6/1 6/3.  In the next quarter, Penny Lumley, reigning Masters Champion, outclassed Candida, who nonetheless played her best game, with lovely low ground strokes, and claimed she’d really enjoyed the experience of being beaten 6/0 6/0.  Penny ended the final game with a beautiful dedans force, her first of the match, just to show she could. 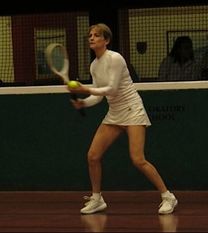 Lorrayne Gracie
On Sunday Lorrayne played Tiff in another great nail-biting three-setter for the first semi-final.  All arms and legs, Lorrayne stretched elegantly for the ball and strode across the court to reach everything.  Tiff’s style, by contrast, was all efficiency and neatness, punching the ball with little swing but a lot of body, a compact ball of energy.  It was a fascinating contest.  Lorrayne was getting back anything straightforward, however well struck, so Tiff had to go for corners to make any headway.  But Lorrayne began to anticipate better, and won the first set 6/3.  In the second, it all depended on whether Tiff could keep Lorrayne from getting a clean shot at a winning opening or to drop under the grille.  Both began to make more unforced errors under the pressure.  With Lorrayne 5/3 ahead, it looked all over, especially when she was 40/0 up in the next game.  But at the Hazard end, she just missed the dedans, giving a mid court chase, and then laid Chase 2.  Tiff won both, and then the next point: Deuce and then game, so it was 4/5.  At 5/5, Lorrayne looked discombobulated at having lost the last two games, and indeed Tiff took the set 6/5.  So one set all. In the third, both looked like the walking dead, exhausted by the tense and physical battle.  But in the end, Tiff used every bit of her court experience to vary her shots and pace, and ground out a fine win: 4/6 6/5 6/4. 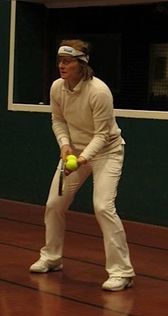 Liz Leach
​
In the other semi, Liz Leach was the next victim for Penny.  Liz got herself nicely into position for Penny’s shots, but was making errors from the sheer weight of them.  Against a lesser opponent, Penny graciously sends relatively nice ground strokes, but the moment there is any threat, such as two successive points won against her, she unleashes a humdinger into a corner or at a winning opening and it is Goodbye to All That.  Penny wins 6/0 6/0.

​In the Final, Penny met a very stiff Tiff.  After her previous three-setter, Tiff was not fully mobile, and Penny took full advantage, sending balls into corners and making Tiff look flat-footed.  The first set went to Penny 6/1.  In the second, Tiff loosened up a bit, and got some success with corner shots that forced errors from Penny; but never enough points to win a game.  At 3/0, she looked oh so close to getting another game, with two great shots that spun away from Penny, and then a helpful netcord when defending Chase 2, to make it 40/30 to Tiff, followed by Chase 1st Gallery to attack.  Alas, a lovely shot by Penny under the grille got it to Deuce, and after another two deuces, the game went to Penny after all.  Hope snuffed out for Tiff, and without another game lost, Penny won the Masters title again, 6/1 6/0, in great style. 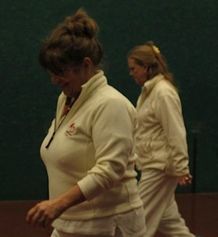 Six doubles pairs played in the Plate Doubles, in a set of first to 8 games for each match.  These were fought hard but with great bonhomie, in some very enjoyable contests.
​
First up, Gabrielle Smart-Fourquet and Chantelle Harding against Sarah Brownlee and Lucy Davies.  It was a match enlivened by clever tactics and cunning placements, especially from the former pair.  Unfortunately, the cunning plans quite often confused the perpetrators more than their opponents, to great hilarity in the dedans as both Gabrielle and Chantelle headed for the same corner after a service, or both stood still as a shot whistled down the middle.  But Gabrielle going forward towards the net after her serve proved very effective, giving her and Chant a 7/5 lead.  Thrown away in the next game when their 40/15 lead was whittled down to 40/40 with some loose returns, and then Lucy fired a fine dedans shot to make it 6/7, which then became 7/7.  At 40/40, Gabrielle and Chant were attacking Chase 4.  A loopy shot was just tempting enough to make Sarah hesitate and leave it, but it came sharply off the wall to win the chase and the match for Gabrielle and Chantelle, 8/7. 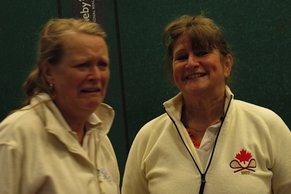 Gabrielle and Chantelle hear the handicap against them!
​Lucy Hutchinson and Candida Nicholls against Gill Goddard and Annabel Wyatt was the next match.  Gill and Annabel, with a useful handicap in their favour of 15/Owe 15, romped off to a good start of 4/1, with Annabel particularly solid on her ground strokes, with an unmistakeable style that involves no knee bending at all but leaves the racquet like a bullet.  Lucy and Candida calmed down a bit after the initial shock, and had a bit of success with cunning bouncy shots at the dedans which successfully drew quite a few errors.  But they were struggling to contain the power and consistency from both players on the other side of the net, and couldn’t overcome the handicap against them.  8/5 to Annabel and Gill.

​Next, in the first semi-final, ‘The ‘Elles’ (Gabrielle and Chantelle) against Annabel and Gill, who again had a helpful handicap in their favour.  First strike from Chantelle with a fine force to the dedans, but then the exchanges followed more or less in tandem, as the pairs had a constant battle, swapping quite high trajectory but powerful shots across the net.  At 6/6, it was anyone’s match. Then Gill in particular upped her game, hit great solid ground strokes down the middle, and winning the next two games, she and Annabel went through to the final.
The other semi-final was between Linda Fairbrother and Lucy Davies (brought back as a lucky loser) against Jo Miller and Kim Walker, played level.  All was plain sailing for Linda and Lucy up to 5/2, with Linda’s return of serve devastating Kim in the forehand corner, and Lucy sending clever shots up both sidewalls.  Then Jo changed tactics, guarding the net and cutting off Linda’s service returns.  Soon it was 5/5.  From then on, it was Lucy’s game, especially her serve, which brought success to her partnership – helped by loose shots from their opponents to concede two games of 40/40.  Lucy and Linda won 8/6 to go to the final.

All went swimmingly for Lucy and Linda for the first few games, despite giving 15/0we 15 in handicap.  Linda and Lucy’s services were working well, and Linda was also able to drive Gill’s serve into a distant corner with impunity.  Then at 4/1, Gill and Annabel got into their stride, with careful play that extended the rests, and brought the score to 4/4.  After that, the games went up in tandem to 7 all.  Two loose returns of serve from Linda (her worst of the tournament!), made the score 40/0 for Annabel and Gill, and they held their nerve to take the match 8/7.
Huge thanks to The Oratory for hosting this excellent tournament, especially Marc Seigneur who marked every single match on Saturday and Sunday – with a smile on his face throughout.  Hardwick House kindly hosted the dinner, and Katy Weston – who superbly organised the tournament itself, helped by Lucy Hutchinson – was also Head Chef providing a wonderful meal in the clubroom. B & B provided by local players was also much appreciated. Finally, a thank you to Wineflow for their sponsorship – should Caroline be so kind as to repeat this in future, we hope she will make it to the tournament next time…

Report by Linda Fairbrother
Return to top of page