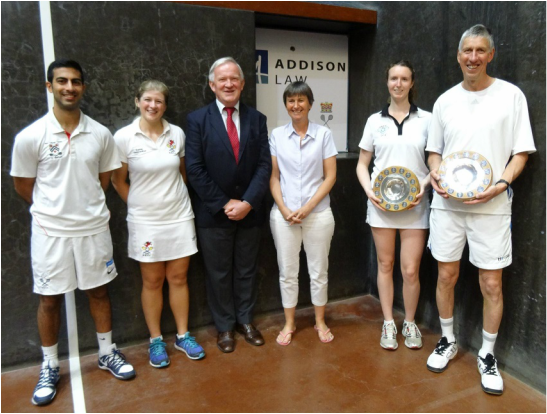 The finalists with Chris Halliwell and Alex Garside
Many thanks to Alex Garside and Simon Flynn for the photos. 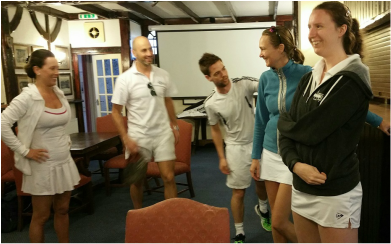 Jo Hunter, Saverio Campione, James Law, Elvira Campione and Isabel Candy
It was unfortunate that most of the visitors could only play on the Saturday so both of the Friday groups had only one pair of non-Seacourt players. The first match between Lucy Hutchinson & Peter Swiss and Rosie Law & Ken Osborne was very close with every game going to 40 all. Lucy & Peter won 6/5.  At the start of the second match Rosie & Ken went 2 love up but then Doris & Geoff Oldland got back to form and took a 4-2 lead but Rosie & Ken then came back to 5 all with Doris & Geoff taking the final game 6-5.  Doris & Geoff went on to win all their matches and won the group.  Having lost their two previous matches, Patsy Danby & Ray Evans played much better in their final match beating Rosie & Ken 6-0 and so allowing Lucy & Peter to go through as group runners-up.

Group 2 had the new pairing of Karen Prottey & Dick Cowling from RTC proving too strong for Jess Garside & Simon Flynn who started slowly and then improved through the game but lost 6/3.  They then stayed on court and found themselves 3/0 up before Sue Bicheno & Chris Halliwell got a game.  Jess & Simon then went on to win 6/3.  Sue and Chris had a very close game with Alex Garside & Mark McMurrugh with 40 all in each game to begin with, and although Alex and Mark took a 4/2 lead, they could not maintain it and lost 6/4 (much to the delight of Chris our sponsor!).  Karen & Dick played well and beat Alex & Mark 6/2 and Sue & Chris 6/0 making them group winners.  The group runners-up were Jess & Simon who squeaked through having won one more game than Alex & Mark.

Saturday saw the arrival of the visitors, some playing in this tournament for the first time. Isabel Candy playing with her father Thomas proved very confident winning all their matches.  Most of the other matches went to 40 all proving that the handicaps were correct. Sophie Dannreuther & Dipesh Mahtani were the runners-up in the group with 3 wins out of 4.  In the last group we saw Fiona & Tony Harrison who had won this tournament for the last 2 years and judging how they started playing in this group, many felt that they may win for a third year.  Experienced favourites Pam and Tim Tomalin almost went through with the same points as Julie & James Levy but Julie & James had won one more match and so were the runners-up in the group. 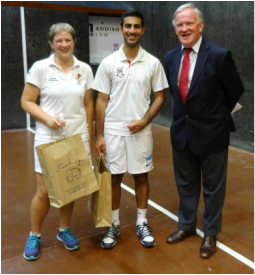 Runners up Sophie Dannreuther and Dipesh Mahtani with Chris Halliwell
Sunday saw the playoff matches with the Julie & James beating the home pair of Doris & Geoff 6/4 in a very tight match.  Second up was another close exciting match between Sophie & Dipesh and Karen & Dick.  This again went to 4 all and then Sophie & Dipesh upped their game and won 6/4.  In the next match Isabel & Tom never let the home pair of Jess & Simon settle into their game and won quite easily 6/1.  The last match proved a surprise with Lucy & Peter outplaying Fiona & Tony to win 6/4 thus ensuring that we have new winners this year.

The semi-finals were very different matches with Julie & James going 4 love up and looking set for the final when Sophie & Dipesh suddenly started to play much tighter, volleying well and serving very tightly to take the match 6/4.  In the second semi Isabel & Tom just dominated the court winning very quickly 6/0 against Lucy & Peter.  The final proved to be a thriller going game for game all of the way until Sophie & Dipesh went 7-5 up and looking like the undoubted winners but Isabel & Tom had other ideas and having saved several match points, they climbed their way back to 7 all and 40 all and took the final point to be the 2015 LRTA Mixed Handicap Doubles winners.

The 3 days proved, once again, to be a very enjoyable time with all the players relaxing in the friendly atmosphere at Seacourt.  Thanks must go to our generous sponsor Mr Chris Halliwell, Alex Garside and Viv Dawes for the organisation, Lucy Hutchinson for the prizes, Dan Jones for his excellent marking of the matches and to the staff at the club for the delicious supper on the Saturday evening which was enjoyed by all.
Return to top of page