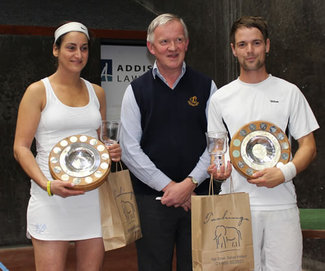 The round robin rounds, played on Friday and Saturday, quickly sorted the wheat from the chaff (your humble scribe in the chaff!) and left ten couples in contention for the title. The day kicked off with a match between Jill Newby (always a force to be reckoned with) and Chris Davies against Karen Hird and John Evans. The younger pair won 6-1 but the score does not reflect the play. Rebecca Kashti and Edwin Richards took on Ros and Alastair Clark with was some discussion regarding the Radley players' handicaps.... In a closely fought battle Rebecca and Edwin prevailed but only just.

Next up was a hotly contested match between the teenage siblings Georgie and Sam Willis against Julia Clarke and Simon Flynn. It was a great display of strength and athleticism and the score line 6-5 told the whole story... it could have gone either way.

In a hard hitting, fast game between Alex Garside and Spencer Davies versus Alex Kurkjian and James Law - which had the dedans silenced with the display of lightning fast reactions - the youngsters finally got the victory they deserved. We then moved on to a sort of mirror image pair in Jess Garside (daughter of Alex) and Lewis Davies (son of Spencer), last year's winners, who took on Karen and John, whose experience and discipline gave them a relatively easy win, though Jess and Lewis gave them a good fight. 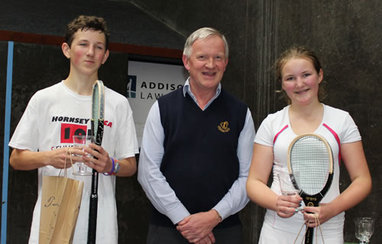 Runners up Sam Willis (Chris Halliwell) and Georgie Willis
The match between Jackie Carter and Nigel Ireson against Rebecca and Edwin was of a slower pace and the punishing handicap imposed on Jackie and Nigel was too much for them.

In the semi finals it was Karen and John versus Georgie and Sam. Once again Karen was subject to a punishing handicap and the lightness of touch and fleetness of foot displayed particularly by Sam was a joy to watch. The Willis' win by 6-3 was well deserved. Next we saw Rebecca and Edwin facing the talented duo of Alex and James and even with a handicap of rec 30 - owe 1/2 30, Alex and James were thoroughly professional and saw off their opposition 6 games to 3.

We knew we were in for a fantastic final with Georgie and Sam facing up to Alex and James. They did not disappoint! Alex's powerful volleys (what does she have for breakfast?!) and James' accurate forcing gave them an early lead and it looked as if Georgie and Sam were going for an early shower. Not a bit of it! At 2-7 down, the brother and sister team dug deep, played with great maturity, and had the most tremendous comeback. It was heartening to see the wonderful support for one another; and their refusal to give in got them to that most exciting of finishes: 7all, 40 all... Alex and James pulled it off and those in the dedans were on their feet! It was a fitting climax to a great weekend.

Our thanks must go to Seacourt for their kind hospitality; to Alex and Viv for faultless organisation; to Alex and Ian for hosting a lovely dinner in their home; to Danny and Adam for all the marking, and once again to Chris Halliwell and Addison Law for their generous sponsorship.