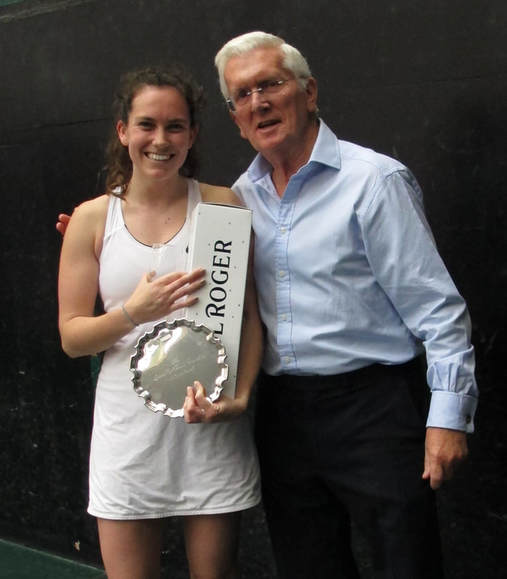 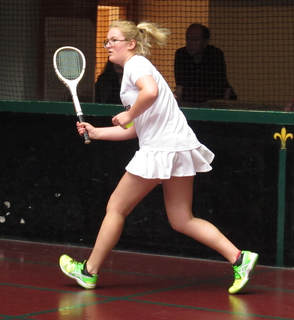 Georgie Willis
​This year’s Ladies International was marked by sunshine outside and withdrawals inside.  It was the hottest early May Bank Holiday on record, to match the scorching tennis on court.  But the tournament was beset by injury, with one pre-tournament withdrawal, and three during the weekend.  Nevertheless, the tennis was of a very high standard and all the matches were close, even where the scores might not indicate that. The level of tennis and the number of good young players, all keen to progress, is very healthy for ladies’ tennis.

The 2018 International was the first to be played at Petworth, and indeed the first tournament to be held there following completion of the new Club facilities, which were much admired.  Petworth now enjoys a spacious, light and comfortable dedans and club room/dining area, plus separate changing rooms for ladies and gentlemen, much to the delight of those who remember the ‘quaint’ old single shower and single loo.  The players naturally took advantage and used both changing areas!

The facilities were not the only new things: there were three faces new to the tournament and a young line up, with only one player over 30, a good sign for the future of real tennis.  Of course, we missed the title holder, Claire Fahey, but with her second baby due in June, she wisely decided not to defend her title.  Another former International winner, Penny Lumley, had stepped in to replace Claire, but a tweaked back put paid to her participation, and the organiser was very relieved to find that Georgie Willis was able to play at short notice.

The tournament got off to a great start with Jess Garside and Izzy Candy taking almost one and a half hours to complete two sets.  Jess got off in fine form, going 4/1 up, but then Izzy settled down and clawed her way back to take the set 6/4. It was a match of long rests, all points closely fought by both players.  Izzy seemed to focus on the grille -  luckily the sponsors’ (Rathbones) grille board was equal to the task. She took the second set 6/4, and the match.

​​Next on court were Tara Lumley and Nicola Doble. This match also began with one player (Tara) going 4/1 up, Nicola fought back but couldn’t quite get the better of Tara who took the set.  The second set was neck and neck early on, Tara was 4/3 up and won the crucial next game to make it 5/3.  But Nicola fought hard, there was one particularly long rest which had the dedans gasping, but Tara came through 6/4, 6/3.  But at the end of the tournament, Nicola could be proud of winning more games against Tara than anyone else (in fact, twice as many!). 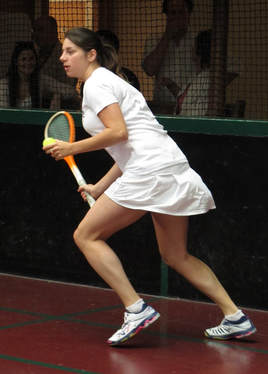 Saskia Bollerman
​Then Saskia Bollerman played Irina Dulbish, a third match to go to 4/1 (this time in Saskia’s favour).  Saskia was returning serve confidently, especially when she could volley down into the opposite corner.  Irina played well and did all she could, but Saskia was hitting the ball strongly and always seemed to have just one more shot than Irina.  That said, the score of 6/2, 6/2 to Saskia doesn’t do justice to Irina’s play.

The last of the morning round robin matches (well, it started in the afternoon as the early matches had been long, despite not going to three sets) saw the biggest difference in handicap (8), as Georgie, the youngest player in the line-up faced Lea Van Der Zwalmen.  Georgie upped her game and played well above her handicap but Lea was always there, using her very effective cut backhand, getting to everything and laying and playing tight chases.  The games all went to Lea in the first set but Georgie dug in, went for everything, especially if she could volley it and fought to get three games, but Lea was just too good and won 6/0, 6/3.

In the early afternoon the dedans and club area filled up as Petworth members came in to see the tennis and also have a preview of the splendid Philip Jackson bas relief. (he created the Bomber Command statue in Green Park and many other high profile pieces, as well as playing tennis at Petworth).  The artwork had been uncovered as a special treat for the tournament weekend, but the covers went back on Sunday afternoon, to remain until the bas relief is officially unveiled by Prince Edward later in May.  The champagne that accompanied the preview proved popular as well as the art.

The second set of round robin matches began with Irina against Jess.  The first set was extremely close, with some excellent tennis, Irina took it 6/5.  Sadly, Jess had to retire with tendonitis in the next set.
​
Then Tara took on Georgie, and Tara was really on song, not making any mistakes, serving beautifully - especially her ‘high’ serve, not really a ‘giraffe’ but no one seemed to know its proper name!  She had been playing at Petworth and the local knowledge was clearly handy.  Georgie loves volleying and produced some great volleys, especially when at the hazard end, off the tambour or in front of the grille, and there were some tremendous volley rests.  But Tara was just too good and won 6/1,6/2.

The next match saw Saskia play Izzy, a very hard-fought match. There were many close and long rests, but Saskia was just too consistent and strong, winning 6/2,6/4.
​
Saturday finished with Lea against Nicola. Lea’s backhand cut and back hand serve, as well as the sheer power of some of her shots were extremely effective, but Nicola covered the court and did some amazing retrieves. However, it was Lea’s match, she won 6/3, 6/1. 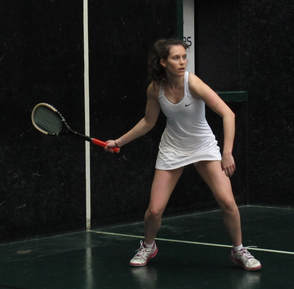 Tara Lumley
Sunday started sadly in that Irina awoke to find her ankle was very painful, so she had to withdraw.  This meant that (without Jess and Irina) there would just be two, not four round robin matches on Sunday morning before the final.  The 9am match was Lea against Tara: there was all to play for, as the winner would win the group and go through to the final.  On handicap, Lea was a couple of points better, but this did not trouble Tara.  After losing the first game, Tara got into her stride and played beautifully, not making any unforced errors and not letting her opponent finish points in the way she had the previous day.  This seemed to put Lea on the back foot, especially when Tara’s high serves proved almost impossible to return.  There was some superb retrieving of balls just inches off the floor by both players, but Tara came thorough 6/1, 6/1 to go into the Final.

The second match on Sunday was between Georgie and Nicola.  By now it was getting quite hot on court, with a pesky patch of sunshine just where the server tended to stand.  Georgie played strongly, but couldn’t find a serve to bother Nicola, and sometimes rushed her shots into the net.  But she held on well in the rests and was keeping in touch with Nicola in the first set up to 2/4.  Then Nicola put on a bit more pressure to take the set 6/2.  As the second set started, Georgie found confidence and length of shots to take the first two games.  But alas, Nicola was struggling to continue and had to abandon the match at 2/0 down in the second set. 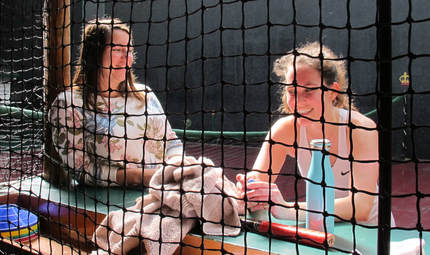 The first point went to Saskia with a good serve, but Tara then laid one chase in a corner, followed by another in the opposite corner and with some great drag serves, took the first game.  And that was how it continued.  Saskia tried to use her power to outplay Tara, but was making more errors as a result.  And though at 3/0 down, she began to make a dent on the score, in a deuce game with lots of chases, Tara still managed to scrape the final point, to make it 4/0.  Another desperate – and brilliant! – game followed, with 7 deuces, and the advantage swinging equally between the two players with a succession of chases of all sorts, from Chase 1 & 2 to The Line.  Once again, however, Tara managed to win the final point with a force to the dedans too hot for Saskia to handle. 5/0.  And, though Saskia had Advantage point twice in the next game, both times she lost the advantage with a volley into the net.  And Tara looked content indeed with a first set score of 6/0.

The tennis was fantastic to watch, despite the scoreline.  When sometimes Saskia had a chance to swing her shoulders and unleash a killer volley, Tara had problems.  But mostly Tara was in control, putting pressure on Saskia with that deadly drag serve and killing any loose shot from Saskia with lovely angles into the tambour or a far corner. 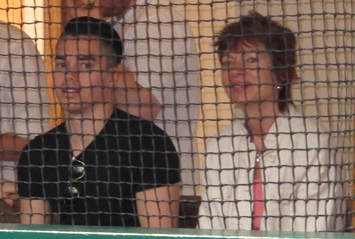 John and Penny Lumley
​On to the second set and Tara stayed cool as a cucumber despite the heat, psychological and physical, on court.  Then at 2/0 to Tara, Saskia finally got herself a game and the dedans wondered if a comeback was coming.  But Tara’s ability to hang on in a lengthy rest and then still perform a killer cross-court stroke to lay a brilliant chase, remained dominant.  And though Saskia did get another two games, to make it 3/4, she was under such pressure the whole time that she was making mistakes, while Tara played more or less flawlessly.  There were amazing rests with wonderful play from both – volleys, hits to tambour, retrieves from tambour, hits just missing tambour, cross-court retrieves, on and on…. It was wonderful play.  Tara never let go her grip, and took the title in fine style 6/0 6/3.  Made all the better for her by her mother Penny and brother John, himself a tennis professional, watching proudly in the dedans. 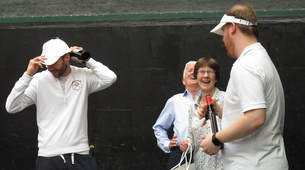 Tom Durack, Robert Dolman, Lucy Hutchinson and Louis Gordon
The LRTA is grateful to Petworth and its members for giving up the court for the weekend and it was good to see Petworth members dropping in to watch the tennis, have a drink, lunch and generally enjoy the tournament atmosphere.  The Petworth Pros, Tom Durack and Louis Gordon, did an excellent job and many thanks to them.  They were presented with an LRTA cap and an LRTA visor, which we hope they will enjoy wearing when the sun streams into the court!
​
Thanks too to the catering team of Helen Linfield, Carolyn Armstrong-Smith and Jan Colgate (all Petworth members) who provided delicious lunches.  We also had a splendid programme, due to the hard work of our LTRA technical expert, Candida Nicholls, so, many thanks to her, especially for her patience when the organiser requested an extra sheet as an insert when she had to bring in a reserve late in the day.  Said organiser was Lucy Hutchinson, who had a very difficult job coping with the various withdrawals and re-scheduling, but managed to keep everything running smoothly and in great spirit.  Thank you Lucy.  We were also very grateful to Robert Dolman, Vice-Chairman of Petworth for presenting the prizes.

And of course, no tournament can run without funding and we are extremely grateful to Rathbones for their sponsorship and to Pol Roger for their support. The generosity of Rathbones and Pol Roger is much appreciated.