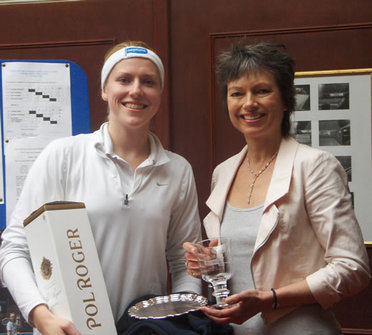 Claire Vigrass with Penny Lumley
The LRTA runs the International every other year, alternating with the World Championships. It is 'by invitation only', for the top eight lady players in the world able to play. They are divided into two groups of four, each plays the other three in her group and the group winners play in the final.  With top quality entrants this year's tournament promised some excellent tennis - and it certainly delivered on its promise.

The most closely fought match on Day One was Sue Haswell v Alex Garside. Sue played a very consistent game in the first set and took it 6/3.  Alex came back in the second and it was neck and neck to 5/5.  The next game was one of high quality, long rests, Sue saved three set points and then managed to close out the game and win the set and the match 6/3,6/5.

Day Two opened with the two left-handers, Sue and Nicola Doble, a well matched pair with both playing well. Despite some excellent volleying, especially in front of the grille and tambour, Nicola was unable to get the better of Sue who won 6/4,6/3. 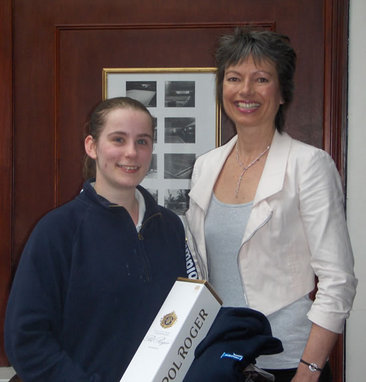 Karen Hird with Penny Lumley
Day Three saw the most evenly matched games and we were treated to six and a half hours of cracking tennis. First on were Alex and Nicola, both somewhat tentative at first. Nicola's serving helped her to a 4/2 lead but Alex fought back, taking the next game to love. Thereafter it was hard fought to 5/5, in the next game Nicola beat better than half a yard to take the set. The second set was equally hard fought. At 3/3 Alex started the next game well, finding the tambour three times to go 40-love up but Nicola recovered to take the game and then closed out the match to win 6/5, 6/3.

Next on court were the defending Champion, Claire Vigrass and Sue. The latter played well but whatever she did, she could not get the better of Claire, who won 6/0,6/1.

Then followed what was destined to be the longest match of the tournament, Aldona Greenwood against Jill Newby. This was a match of low, fast ground strokes, good chases and full use of all corners of the court. The first set was neck and neck to 5/5. In the deciding game Aldona laid two good chases which Jill could not beat so it was 30-love to Aldona. Jill came back, laying and winning two chases to reach 30/30. Aldona had a set point but was unable to convert it and Jill took the set 6/5. Aldona started the second set strongly, using the corners well, and took a 3/1 lead but Jill fought back to 3/3. Each game continued to be fiercely contested, with long rests, Aldona was back in the lead at 5/3 but Jill pulled out all the stops to claw back to 5/5 However, Aldona held her nerve and took the next game to level the match at one set all. In the third set both players were feeling the effects of the long match but battled on, not giving an inch. The sixth game was one of long rests and several deuces, with Jill eventually winning it to go 4/2 up. Aldona took the next game but Jill the following so it was 5/3; Aldona saved two match points and then was a point away from winning the game but was unable to clinch it and Jill won on her third match point.

After that marathon Karen Hird and Sarah Vigrass came on court, knowing that the winner would play Claire in the final. The tempo was fast, with both playing excellent tennis, great volleying , amazing retrievals (which left the spectators in awe of their speed around the court), use of all the court and clever variety of pace. The first set was neck and neck to 5/4, with Sarah winning the tenth game to love to reach 5/5. Karen then came back and took the next game to win the set. The second set lasted an hour, with both players fighting hard on every point of the many long rests. Karen's local knowledge of the court was a help, especially on serve. The fourth game was a marathon of deuces, with Karen finally closing out to go 3/1 up. The next game was another long one, this time Sarah won and she then took another with some hard forcing shots to reach 3/3. It was neck and neck to 5/5.Karen then had match point, which Sarah saved with a beautiful low cross court backhand. Karen's second match point was chase better than two on her serve, Sarah just missed the dedans and Karen had won this fantastic match 6/5,6/5. 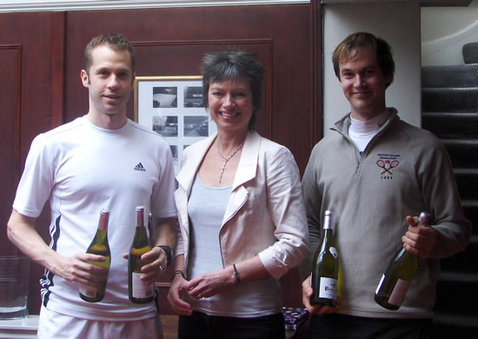 Tom Durack and Angus Williams, the markers, with Penny Lumley
So the final was a rerun of the British Open final: Claire against Karen- could Karen get her revenge and topple Claire? A tall order with a handicap difference of 13, but Karen fought very hard and it was a match with some inspiring tennis. Karen's anticipation, volleying and retrievals were excellent, but Claire was always there, with an answer, placing the ball beautifully, varying the pace (which she could 'up' so that one hardly saw the ball as well as delicately putting it softly into the corners) and consistently good, low crosscourt ground strokes. Whatever Karen tried, Claire was unstoppable and won 6/0, 6/1.

We were delighted that Penny Lumley, former World Champion and the winner of the first four International Invitation tournaments, presented the prizes. With her, Claire and Rob Fahey present there were three World Champions in the room!

Our thanks go to Neptune for their sponsorship, to Pol Roger for their support in the form of champagne prizes, to Holyport for hosting us so well, to the markers, Chris Bray, Tom Durack, Mark Eadle and Angus Williams and to Jill Newby, who not only played but somehow found the time to do all the catering - the Sunday lunch was a particular treat!
Lucy Hutchinson


Thanks too to the organisers, Lucy Hutchinson and Sheila Macintosh and to Lucy for the photos.  Ed.
Return to top of page