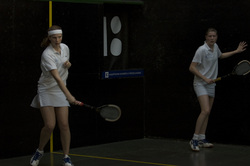 Claire and Sarah Vigrass' achievements in Real Tennis were recognised when they were invited to the Women of the Year Awards lunch in London.

Click on the picture to read a report by Linda Fairbrother. 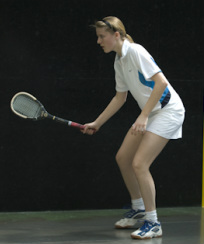 The following announcement has been posted on the USCTA website http://www.uscourttennis.org/ :

"Due to the lasting effects of Sandy, the US Ladies scheduled for November 2-4 in Tuxedo has been postponed."

No new date has yet been given but we will publish more information when this becomes available.  Our thoughts are with all those affected by Sandy and we send them all our best wishes. 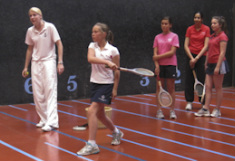 A number of youngsters enjoyed a day's coaching with the World Champion Claire Vigrass at Cambridge on Sunday, 1st July 2012. The morning session was for Beginners with Intermediates in the afternoon. Click on the picture to see more photos from the day.

This was the first of three Coaching Clinics with Claire - the next one was at Holyport on Sunday, 15th July and the final one at Moreton Morrell on Sunday, 22nd July.  Should you know of any girls aged 21 years or under who might like to participate in any future sessions of this coaching (none as yet planned), please contact Alex Garside or use the LRTA contact form. 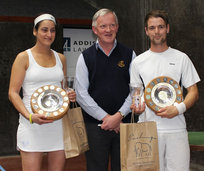 Handicap Mixed Doubles goes to the youngsters as 21 pairs contested this popular tournament. Talented young pair Alex Kurkjian and James Law just scraped a win over teenager siblings Georgie and Sam Willis, with a nail-biting final that went to the wire 7 all, 40 all.

See the results, report and photo....

This tournament is held every other year, alternating with the World Championships. It is by 'invitation only', for the top 8 available lady players in the world and so provides tennis of the highest standard.

Click on the logo for results, report and photos for the 2012 tournament.

Many congratulations to Claire Vigrass who retained her singles title at the April 2012 tournament, played at Seacourt .

Click on the photo for results, photos and full reports.

Sue Haswell elegantly defended her title in the 2012 British Ladies Masters at the Royal Tennis Club, March 16th - 18th. In the final she met Tiffany Fielden, who put up a doughty fight in the first set, keeping things level up to 3 all. But Sue then went up a gear, and though Tiff never gave up, the result was never in doubt, Sue winning 6/3 6/0.

In the Handicap Doubles competition, a fine effort by Katy Weston and Kate Rowe; they played a calm steady game against Claire Stacey and newcomer Margaret Jones to win 8/2. Full report and photos to follow soon....

Another close set of matches entertain at the Billy Ross Skinner tournament in February 2012, with the younger generation ladies getting oh so close to the honours. But this year's title is taken by newcomers John Evans and Elvira Campione.

Many congratulations to Penny Lumley who on 9th December 2011 received an award from the US Court Tennis Association (USCTA) - she was inducted into the USCTA International Hall of Fame. The dinner was held in New York on Friday, 9th December and we have a full report and photo(s) to mark this special occasion.

Congratulations also should go to Freddy Adam who has received an award from the USCTA - the George Plimpton Award for artistic contribution to the sport. She also attended the dinner. 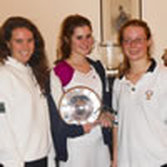 Radley staged the U21 Girls Handicap Singles on Sunday, 27th November 2011 - 19 girls took part in what was an excellent day of tennis.

Now updated with the results of Group A which was played at Canford on Sunday, 11th December. Click on the picture to find the full results and the tournament report as well as photos. 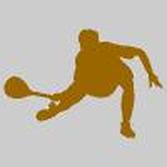 The Ladies French Open will once again be played alongside the Men's event at Bordeaux. This is likely to be the last competition to be played at the club as it is due to close by the end of the year.  Since the entry form was issued, Simon Marshall has agreed to increase the main draw to 8 ladies, however, if more than 8 wish to play, the remaining players will compete in a competition on the Monday (finals day) - the exact format to be confirmed by Simon.

Those of you interested in playing, please contact Simon Marshall or Gabrielle Smart as soon as possible.  Closing date is 31st August, 2012.  For the entry form, please press on this link  -  no longer available from 31st August 2012.