and trophies generously supplied by Inkerman 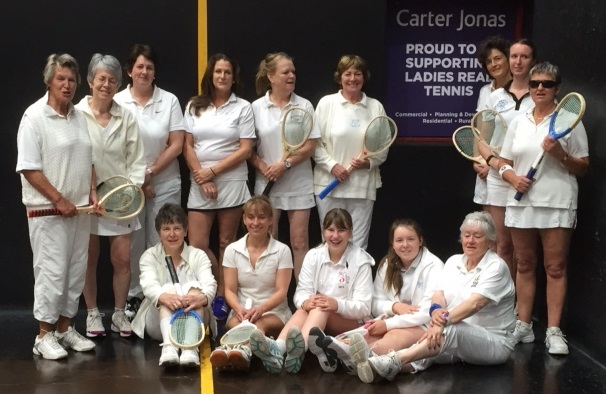 The weekend of 12/13th September saw the annual LRTA Doubles Handicap High/Low Tournament generously sponsored by Carter Jonas, with elegant trophies kindly donated by Inkerman and beautifully hosted by Leamington Tennis Court Club.  The markers were to be Ben and the very kind Zak.  The High/Low means that everyone enters as an individual and pairs are then assigned with the Highest handicap player being paired with the Lowest handicap player working towards the middle.

An enthusiastic gathering of ladies amassed in the galleries and the jolly nice coffee shop across the road!  Oh, the draw of a discount and speaking of draws...The first day's play saw the title defenders Jeannie Pigott and Amy Pye (yes, extraordinary that the handicaps worked out such that they played together again) displaying all the elements of last year's form with increased gusto.  Last years runner up, Sarah McGivern was sadly off form and could not produce her tricky trademark wall shots and provided little support to her partner this year, Trish Morris.  Some wonderful serves and volleys were produced by Gabrielle Smart Fourquet who had travelled from France to play and Julie Levy, the player with the loveliest of all smiles who showed her ability and determination to defend when put under pressure.  Isabel Candy more than adequately demonstrated why she possessed the best handicap there and her consistent volleying when returning serve is a skill to be admired.  Her partner Barbara Bush did her best to support her but more importantly it was lovely to see Barbara's return on court after having suffered a brain haemorrhage that nearly robbed her of her life.

A delicious dinner prepared by Charlotte, was accompanied by the usual booze and banter and the convivial atmosphere offered the perfect closure to the first day that saw the top four pairs standing at Pigott/Pye, Tomalin/Weston, Davies/Lucey and Smart/Levy.

A bright and early start, not that this writer feels bitter about that at all, saw a slightly more focused regrouping of women. The shaker and mover behind the tournaments generous prizes and sponsorship Rebecca Kashti, continued her elegant and consistent style and Diane Binnie's handicap certainly belies her game.  What can be written about 'Team Luc(e)y'!  This pair:  aka Lucy Davies and Hannah Lucey, more than any other embodied the ethos of the tournament.  These two fabulous players displayed all the best aspects of enthusiasm and experience making them a force to be reckoned with on court and from the viewers perspective all of their matches were a pleasure to watch and their place in the semi finals was well earned.

The tournaments joyful organiser Pam Tomalin and LRTA Treasurer Katy Weston proved to be a determined, wily pair to play against.  With a skilful manipulation of pace Pam consistently found the corners whilst Katy's deceptive serve proved quite tricky for opponents to deal with, it came as no surprise that they too made it through to the semi finals.  The final line up for the semi-finals was Davies/Lucey, Pigott/Pye, Tomalin/Weston and Wyatt/Wright.  Wyatt/Wright beat Davies/Lucey and Pigott/Pye beat Tomalin/Weston.

Thus the final saw Jeannie Pigott and Amy Pye playing Annabel Wyatt and Elaine Wright, one part Bristol, three parts Prested Hall!  The Essex pairing went 3:1 up with Annabel producing two amazing back to front, inside out trick shots.  The writer never ceases to be delighted by what her friend/partner and her racket can achieve when under pressure.  However, Jeannie's sneaky serve proved effective and they began to dominate.  With a determined run across the court Amy launched a fabulous cut into the backhand corner sealing a well deserved 6/4 victory.

In her after dinner speech Pam described this tournament as "just a fantastic, wonderful, event for us all" and it is.  As a player it offers a discreetly competitive weekend full of challenges and camaraderie for which we are more than grateful, so a big thank you to all of you that make it happen from those of us who enjoy being a part of the LRTA.

With many thanks to Carter Jonas and Inkerman, LTCC and Zak and Ben and a special final thanks to Pam Tomalin for organising a great event.

And I mustn't be late.

We drove up by car)

What a marvellous sight!

With fun and zeal!