September 17th and 18th, at Leamington 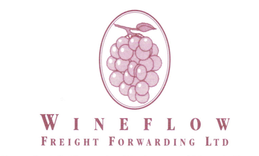 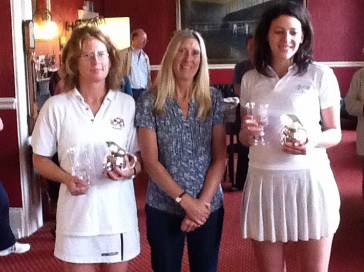 This was the fourth year of the High/Low handicap doubles, a very sociable event, especially since the round robin format ensures that everyone is at the club a lot of the time.  The player with the highest handicap is paired with the lowest handicap, the second highest with the 2nd lowest, etc. This means you may play with a partner you may not have considered before.  It was good to see players from a variety of clubs, plus some new faces.

Saturday’s matches ran smoothly, with a competitive spirit in the air accompanied by lots of friendly banter.  Shouts of ‘Get a grip!’ greeted Gill Goddard’s second accidental crash of racquet on floor; she continued unfazed.  By the late afternoon social banter in the dedans reached new heights  -   of course there was support and cheering for the players on court too, not just chat!

By the close of play on Saturday scores at the top of the table were neck and neck.  The experienced and consistent play of Pam Tomalin complemented by Jo Bartholomew having a great day, ensured they had won all their matches. However they were not alone!  The Sarah Backhouse and Madeline Grant duo were also proving unbeatable with their exceptionally strong ground strokes often forcing their various opponents to make errors.  The match when these pairs would play each other was something to look forward to for Sunday.

On Saturday evening there was a well-attended dinner in the splendid dining room at the Club.  It was my first visit to Leamington Tennis Court Club and having dinner in such a beautiful room, after the day of energetic tennis, considerably added to the great experience.  The ambiance, food and company were excellent. 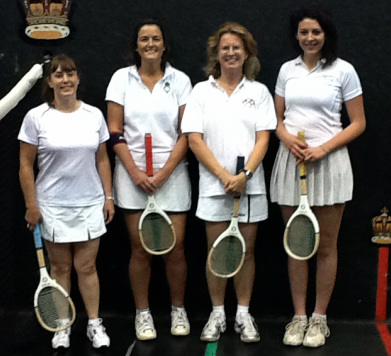 C Nicholls, R Kashti, S Backhouse & M Grant
On Sunday morning, some players were on court rather earlier than others.  There were various comparisons of hotel breakfasts versus Starbucks and the degree of fuzziness of some peoples’ heads.  The Lansdowne Hotel residents appeared to have had an interesting time, but maybe we should not dwell on ‘The Curious Incident of the Lady in the Night-dress’.

Sunday’s matches started well with tension filled games, lots of ooh’s and aah’s and drawing of breath in the dedans, as tables turned.  There were some notable moments.  Trish Morris and Katy Weston were winning 4/1 when Mandie Holloway and Annabel Wyatt stepped up their game.  At 5/5, Wyatt was serving for the match.  We all recognise that moment when we think ‘Just one good serve’, but the serve came back and the ball headed back and forth across the net until Morris and Weston succeeded in winning the point and the match.

The next exciting match was the strong Pam Tomalin and Jo Bartholomew duo v the relative newcomers Candida Nicholls and Rebecca Kashti.  The final point was won by Kashti’s exceptional volley blasted into the winning gallery - a very special moment as she had never before won a winning gallery point.

By the time all the round robin games had been played there was one pair clearly ahead: Backhouse and Grant had won six out of their seven games and were clearly through.  But with four other pairs all with four wins, it was very close and there was checking and re-checking for a nerve-wracking 20 minutes.  In the end, the Davies - Yeung partnership went through against Backhouse and Grant.  Although they were the only ones to have beaten Backhouse and Grant in the round-robin phase, could they win a second time?  Twice running was too much to ask.  In spite of Audrey’s dazzling volleys and Lucy's heroic ground game, the youngsters were too much for them, winning 6/4.  The second semi-final was a hard fought match with Candida Nicholls and Rebecca Kashti beating Mandie Holloway and Annabel Wyatt 6/5.

On behalf of everyone who played I would like to extend a very large thank you to: Carolyn Armstrong-Smith of Wineflow for sponsorship;  Leamington Tennis Court Club for hosting the tournament and providing fabulous food and Sarah McGivern for organising such an enjoyable and well run tournament that ran like clockwork.