Out of date items 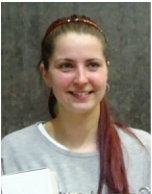 Irina graduated from Middlesex University with a BA in Magazine Publishing in 2014.  She took up real tennis in her second year there and in her final year MURTC offered Irina an internship for showing potential at the game and to help her progress further.  After graduation Irina was offered a scholarship by Adam Phillips at MCC.  Whilst there she played in her first French Open in 2014 winning her first title, the French Open Doubles with Claire Fahey.  In 2015, Irina played her first British Open where she and Freddy Adam reached the Doubles Final and they also reached the semi-finals of the World Championship Doubles.  In the 2015 French Open, she reached her first Singles final.  Irina and Freddy then went on to win the French Open Doubles.  Last year Irina also played her first US Open (held in Boston), and was very successful, winning both the Singles and, with Freddy, the Doubles.  They have just won the 2016 Ladies British Open Doubles.
May 2016 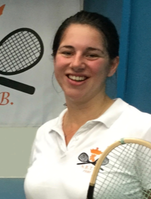 Saskia first got known in the real tennis world as the Dutch contingent together with her mum Lucie Douwes Dekker. She made Dutch history as the plate winner of the 2015 World Championships. Since then a lot has happened for Saskia. After finishing her Biology bachelors degree in July 2015 she went to Melbourne for 6 months work experience at the RMTC. In this period she won her first open doubles title together with Claire Fahey. She improved 20 handicap points within 6 months and decided to play as much as she could combining this with her MSc in Biology. Apart from defending her ladies title at the Dutch championships held at Radley every year, she won another Australian open doubles title with Claire in 2016 and made it into the World Championships doubles final with Amanda Avedissian in 2017. (On the singles front she's also improving, getting into the semi finals of the British Open 2017 and World Championships 2017 both losing to Sarah Vigrass in three sets.)
​
Sept 2017