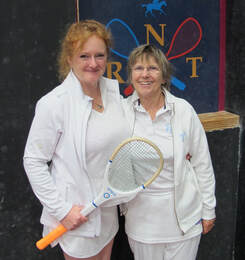 Jane Taylor & Linda Fairbrother
It was a full house at Newmarket for the High/Low Doubles: sixteen players, (including three Lindas and two Sarahs), four male supporters and one dog called Bertie.

The format partners the lowest handicapped player with the highest handicapped; the second lowest with the second highest, etc.  With this system, the fiendishly complicated Real Tennis doubles system creates surprisingly close handicaps, so everyone has a chance….   Aha!  Unless a student bandit comes along to bolster an already pretty nifty player…but more of that later.

Every pair plays every other pair, which, with eight pairs, means 28 matches to determine the semi-finalists.  Timing was tight therefore, but players were extremely helpful in speeding along play, so much so that we got half an hour ahead and actually had a lunch break on Saturday (delicious by the way).  The stentorian roar of Andrew Knibbs our marker also kept things moving –  the Brian Blessed of professionals, and ‘blessed’ indeed in that there’s never any doubt about what‘s the chase.

One particular peculiarity of the weekend was the disappearance of garments.  Firstly, Di Wilson managed to sell Gabrielle Smart’s gilet to someone else (she is to be commended for her effort to top up the LRTA’s coffers); and then there were two pairs of trousers missing, along with a skort.  (The trousers turned up but not the skort.)  Why could the players not keep their clothes on?

Anyway, clothed or not, play continued and by midday on Sunday, the two semi-finalist pairs had emerged.  Rebecca Kashti & Jacqueline Siu (a PhD student from Cambridge) saw off Linda Fairbrother & newcomer Jane Taylor (much to be admired in her play during the tournament, after a very few months as a player).  Deep shots and good serving meant Linda & Jane couldn’t convert any of their many game-points, and were denied any games at all. 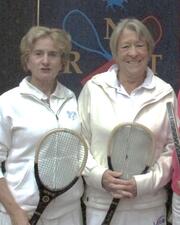 Linda Sheraton-Davis & Suzanne Lindsay
Then Rosalinde Emrys-Roberts & Sarah Sullivan beat Linda Sheraton-Davis & Suzanne Lindsay.  The latter had spent much of her previous matches glued to the wall at Second Gallery where Linda had placed her.  In the semi-final she was allowed out on to the court and did very well indeed, but not enough to beat the ‘Scoopers’, who retrieved everything with Rosalind specialising in loopy shots falling into the back wall nick.

By now it was apparent to all that Rebecca and Jacqueline were romping home, having a score of eight sets to nil so far.  In the final against Rosalinde and Sarah, might they finally choke?  No way!  Jacqui had been improving match by match, refining an excellent underarm twist; and Rebecca played almost without errors, giving no quarter.  They coped easily with the high slow shots coming at them, and happily just stepped into the shots to finish off the points and games.  The final was played to best-of-eight and there was a cheer when Rosalinde and Sarah got on the scoreboard at 1/4, followed by another game to make it 2/4.  But Rebecca and Jacqui held firm, gave their opponents just one more game for 3/6, and ended up the winners with 8/3, and a clean sweep of nine matches won.  It was pointed out that Jacqui, who hails from Vancouver, could now lay claim to be the Canadian number one – she certainly played well enough!

A final accolade for the players taking part.  Ian Lindsay, one of the Newmarket directors, was kind enough at the dinner to say: ‘The ladies were not horrid.’  A recommendation indeed.

Our hearty thanks to the Newmarket Club for hosting us and to Andrew Knibbs our marker. Hazel Dunn organised the dinner and hotel rooms, and along with Suzanne Lindsay provided a wonderful spread of lunch on both days, plus endless coffee, tea and sweet things.  Also to Inkerman who provided the glass bowls for the winners.  LRTA organiser Linda Fairbrother did not make too many mistakes in her first tournament, so well done to her!

Report and photos by Linda Fairbrother 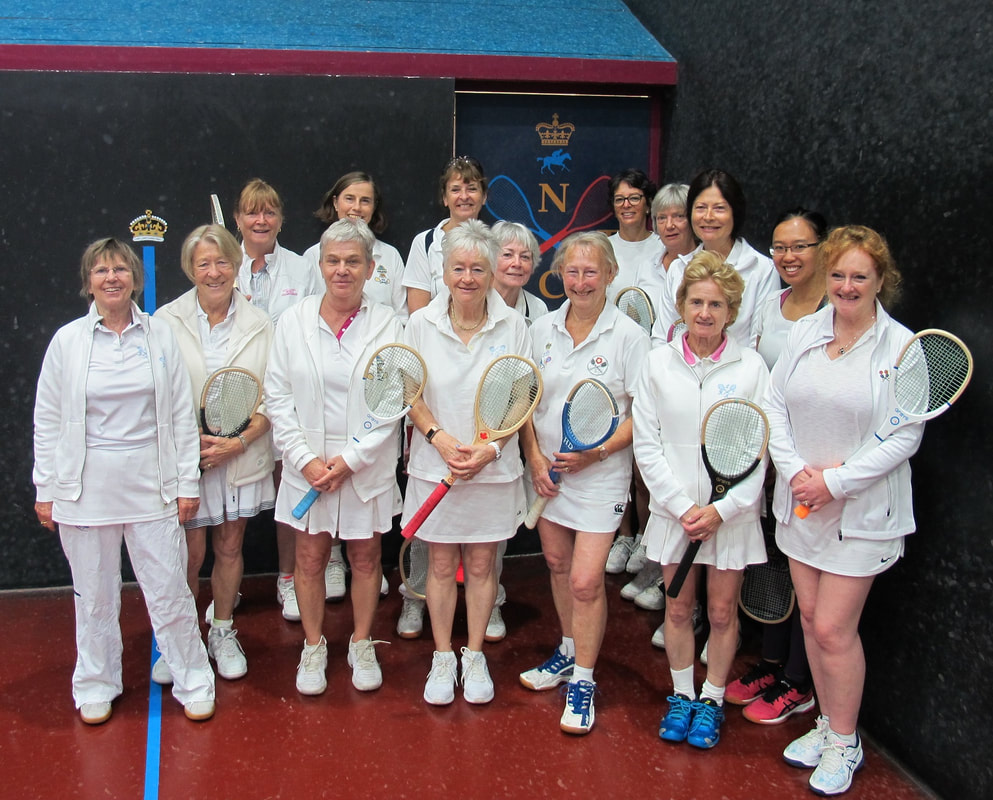