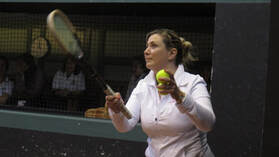 Cecile Alchuteguy
The flavour was certainly ‘international’ – or more to the point, definitely French.  It was great to see a strong contingent of locals taking part: four native-born, and three English emigrées;  and they certainly made their presence known when it came to prize-giving.  And, of course, two Dutch players too, along with the seven Brits who’d crossed the Channel in order to escape the B-word among the croissants and cafes.
The three Fontainebleau players demonstrated how to use the vast deeps and steeps of the court to their advantage – so many nicks on the serve!  So many gentle balls into far far corners!  The rest of us were left struggling with the bounce off the wall, the 50 degree penthouse, and the “dead” spots on the floor that sent a ball spinning in the opposite direction expected.  Yes, Jim, it was fun, but not as we know it.

Play was busy, with 39 matches to be fitted into two days: single round robins and knock-out; Plate Singles; and eight pairs contesting the Doubles.  By the end of Saturday all the round robins had been played, so the day ended with the Plate Singles matches contested by a group of  very accomplished players, including Cecile Alchuteguy, Candida Nicholls and Rebecca Kashti, to name but three.  The plate matches were excellent, well worthy of being in the main tournament, but ended with an all-French final between Cecile and Fontainebleau player Elisabeth Cottin.  Cecile with a handicap of 42 was playing Elisabeth at 69, so she had only one serve, banned the tambour and 30/owe 30, a state of affairs to which she was totally unaccustomed.  Elisabeth took full advantage and won the Plate convincingly 6/2.​ 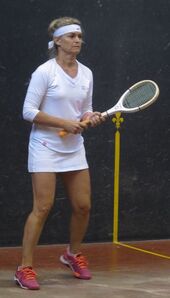 Kim van Boeckel
​In the Singles Knock-Out rounds, the closest match, score-wise, was between Dutch friends Kim van Boeckel and Lucie Douwes-Dekker. At 5/5 Kim had match point 40/30,  defending chase 4 (which is roughly the equivalent of UK chase 2).  It should have been in the bag, but Lucie won the chase with a superb shot that just missed the nick. Then at 40/40, Lucie delivered a great serve and stole the match from under Kim’s nose, 6/5.
All the other matches had many 40/40 games, though the eventual scores were not so close.  By the semi-finals, the line-up was Katie Leppard against local Isabelle Breucq, and Gabrielle Smart-Fouquet against the youngest player, Eve Shenkman.
Katie against Isabelle was a nail-biter. Katie’s fierce railroads were working well on the Fontainebleau penthouse, so she dominated when at the service end. But Isabelle made the most of her handicap advantage of 24 points, and was getting enough shots back to keep the game score in tandem all the way to 5/5.  In the decider game, Isabelle was 30/0 ahead, and then just managed to scrobble a ball over the net before falling to the floor.  Not surprisingly,  Katie was distracted by this and put her return in the net, to make it 40/0 to Isabelle.  One good serve made it 15/40, but then she netted the ball in the next rest, so  Isabelle was through, 6/5.
In the second semi-final , Gabrielle was up against Eve with a 5 point handicap difference. Eve bounced around on her toes like a Duracell bunny, and even Gabrielle’s twisting, kicking serves couldn’t dampen Eve’s enthusiasm for thumping the ball back.  Gabrielle was playing with her usual steady strategic style, but Eve’s younger legs helped her to sustain the rests longer, and she won through to the final. 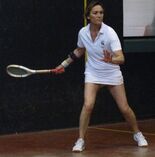 Isabelle Breucq
​The Singles final between Isabelle and Eve was played to eight games.  And it was anyone’s game up to 6/6.  Eve was giving 18 points to her opponent, but played carefully and calmly, trying to avoid any unforced errors.  Isabelle, however, was hitting her balls freely and well, forcing enough pressure on Eve to gain those crucial two points needed to win each game.  At 7/6, Isabelle was beginning to look tired (as well she might, having also played in the Doubles final just before the Singles).  For the first time since the very beginning of the match, Eve went one game ahead to make it 7/6.  In the final game, an exhausted Isabelle first missed an overhead shot, and then put another in the net to make it 40/15 to Eve. Isabelle rallied to save two match points, with one shot right beside the Last Gallery wall which Eve couldn’t get to; and then a shot into the dedans.  40/40. Eve trumped Isabelle’s dedans force with a force of her own to the grille and took the match and the Singles title,  8/6. 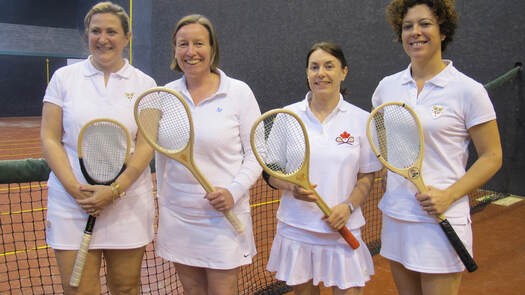 Cecile, Katie, Candida and Quiterry
​In the Doubles competition, there were 8 pairs in contention in a knock-out format.
One of the most entertaining matches was between Eve paired with Margaret Jones (whose  handicap was the highest in the group), against Isabelle & Elisabeth.  Of course Eve tried to take everything, and was pretty successful with this at the service end, but less so at the hazard end where her poaching efforts tended to lead to confusion rather than success.  Margaret’s strategy was to glue herself to the wall at the service end, to allow Eve to intercept; and she splendidly did her best at the hazard end, sending back serves well, and even going for the dedans.  But the handicap was too hard to overcome, so the Fontainebleau pair of Isabelle & Elisabeth went through 6/3.
Isabelle & Elisabeth continued in fine form, serving wicked bobbles into the nick, and making very few errors. By the semi-finals, they met Kim van Boeckel & Lucie Douwes- Dekker who had polished off Gabrielle Smart-Fourquet & Sara Reston in the previous round.  Lots of rests consisting of volleys, and great serving by everyone; but Isabelle & Elisabeth played steadily to go through 6/2, to meet Katie Leppard & Candida Nicholls in the final.  Katie & Candida had been playing big booming ground strokes in their previous matches, and Katie’s railroad serve had been too much for opponents, Linda Sheraton-Davies & Linda Fairbrother, and then Cecile Alchuteguy (with the lowest handicap in the tournament) & Quittery Idiart in the semis. 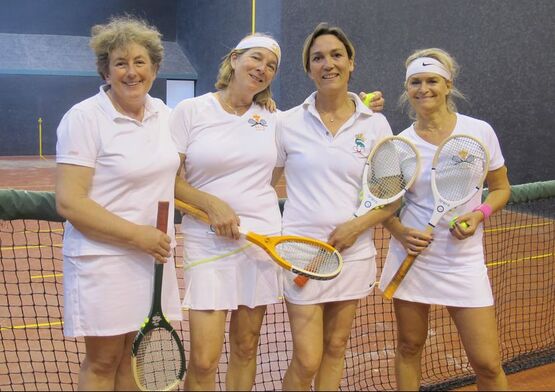 Elisabeth, Lucie, Isabelle and Kim
In the Doubles final, Katie & Candida were giving 19 points to the French pair – could their power overcome that handicap in a match played to best of eight?  It was a difficult ask with the excellent form of Isabelle & Elisabeth.  Two minutes into the match, and Katie & Candida were already 2/0 down.  They had so little leeway with the handicap that more or less every shot had to be a winner. At the service end they were getting points, but every chase was a danger, as it sent them back to the hazard end where the tricky serves and excellent volleying of their opponents rolled off the points, and the games….  Isabelle & Elisabeth stuck to the job, and to their great delight won the Doubles title, 8/3.
So it was an all-French set of both Singles and Doubles winners!  We hope to see as many as possible of the local players crossing the Channel soon to continue their success.

Our thanks to the Fontainebleau committee for hosting the tournament and organising the welcoming drinks party and Saturday dinner.  Eric Delloye with assistant Alex marked the matches excellently in both languages; and huge thanks to Gabrielle Smart-Fourquet who as always made taking part a joy, and organised things wonderfully, including a lovely present of a very stylish rucksack for every participant.
​Report and Photos by Linda Fairbrother
Return to top of page