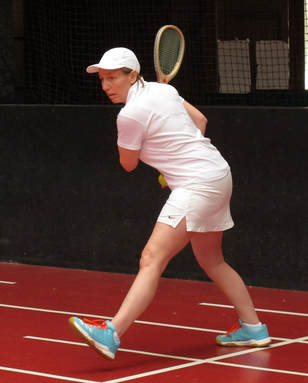 Katie Leppard
​The sun shone, complexions glowed, the balls bounced, and the court rang with laughter and conversation during the 3 days of tournament.  All made even better by the cosmopolitan atmosphere: two Aussies, three Americans, two Dutch, two French and a load of English reprobates including at least four gentlemen supporters.  Standards of play varied of course, but special mention must be given to Christelle Lacaze (French) who was on court for only the second time in her life, and in addition was sporting a six-month bump: “Bof - pas de problème”.  In her first game she managed four double faults in a row, but once she had the hang of it, she gave as good as she got in her matches.

21 ladies entered, arranged into round robin groups of similar handicap, with the lowest handicap at 35.7 and the highest at 91, who had to play at 70, the capping limit. Play was one set to six for all matches, starting at 1/1,  (apart from the last day finals), so players had to be out of the blocks fairly quickly.

The bright sunshine falling on court, particularly onto the receiving corner, gave a lot of trouble and those who specialised in high wall serves gobbled up their opportunity with gusto.  Others found the ‘interesting’ bounciness and swerves of the ball a tricky challenge that some never quite mastered…  The first day round robin Singles matches interestingly had scores of mostly 6/2 or 6/3, with very few 6/4 or 6/5 scores even when the actual play was close.  Winners and runners-up went through to the knock-out rounds and scores began to get tighter.

In the match of Nini Strawbridge against Peta-Louise Jeffery, all games went to 40/40 , with Peta-Louise just winning the final point despite having a Club handicap of 91, but playing 70.  Another close match was that between Linda Sheraton-Davies and Sarah Sullivan which also went to 5/5.  With a grille force, Linda was at 40/30, then Sarah laid Chase 4 and got the serve.  Linda attacked the chase twice, and then a third time; this shot was going to lose the chase but Sarah hit the ball – into the net – with a groan of sympathy from the dedans, to give the win to Linda.  Also of note, an excellent match between Rose Blanden and Rosalinde Emrys-Roberts, with a difficult Rec 30/Owe 40 handicap against Rose.  Rose stayed very calm and climbed the mountain a number of times almost to the top, until Rosalinde pulled out either a nick serve or a tricky short ball, and stole the games from her.  At 5/5, it was anyone’s match, but at 40/40 Rosalinde produced a dedans force (her one and only of the match), and went through 6/5.

So by this time (Sunday morning) the semis were now set up:  Gabrielle Smart-Fourquet, the local, against Katie Leppard; and Lucie Douwes-Dekker against Rosalinde Emrys-Roberts.

Gabrielle (on her home court) against Katie (a two-times winner of this tournament) was likely to be a great match-up.  At first, Katie’s fearsome railroad was doing damage, and she romped to 4/1.  But Gabrielle began to hit shorter balls and served into the nick and with the help of some unforced errors from Katie, levelled up with two great dedans forces to 4/4.  Then the tension began to tell: Gabrielle served a double fault and the score went 5/4 to Katie; another double fault from Gabrielle and Katie took over the serve, with deceptively twisty railroads that lacked power but were very difficult to read.  Katie went through to the final, 6/4. 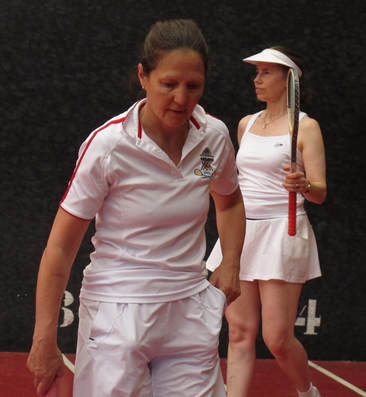 Sue Clegg and Rosalinde Emrys-Roberts
In the second semi, it was a more one-sided contest between Rosalinde and Lucie D-D, with a handicap difference of 10 in Rosalinde’s favour. The balls were moving with little pace in the humid conditions, which gave both players trouble.  But Rosalinde belied her 70 handicap and had fantastic reach across the court, with Lucie unable to get her off balance.  She also got back Lucie’s serve beautifully, and went through, 6/2.

The final (played to best of 8) between Rosalinde and Katie turned out to be a somewhat crippled affair – literally.  In the previous Doubles match, Rosalinde had had a fall and injury (more details below) so was somewhat hampered.  Katie was giving Rosalinde 22 points (Rec 30/0we 30), and despite Katie’s railroad serving, two good pick-ups by Rosalinde was enough to give her the first game.  From then on, however, Katie stayed very disciplined and calm, showing how to play against a steep handicap.  Her serve, tightened slightly, was as always her chief weapon, and the score climbed to 5/1 in Katie’s favour.  In the next game, Katie lost a Chase 1, to bring the score to 40/40, but then a double-fault by Rosalinde gifted Katie the game: 6/1.  Another two double faults at the start of the next game had Rosalinde looking tired and error-prone – not surprisingly after playing one and half matches with an injury -  and Katie pressed the advantage to take it to 8/1, to win the Singles title for the third time.

Doubles
In the Doubles there were 10 pairs playing knock-out from the start. By the semi-finals, Rosalinde Emrys-Roberts & Sue Clegg were against the Aussie pair, Prue McCahey & Rose Blanden; and Katie Leppard & Sophie Dannreuther against the Dutch pair Lucie Douwes-Dekker & Kim van Boeckel.

The first semi was highly entertaining for the dedans, if less so for Prue and Rosie, who were allowed only one serve and banned the tambour (plus heavy points against them).  The first game lasted only 20 seconds, with good serving from the ‘weaker’ pair.  The second game took all of 50 seconds, with a dedans shot from Sue to give her game point, and then opponent Rose aimed nicely at the tambour to beautifully hit it and therefore lose the next point and the game.  In the third game, another tambour shot, this time by Prue, who was so discombobulated at losing the point that way, that  when there was a chase and she and Rose changed ends, she promptly put the service return in the net.  4/1 to Rosalinde and Sue.  Despite a little/large hint from Gabrielle in the dedans: “Ban the Tambour; Ban the Tambour”, Rose again drilled it onto the tambour base.  And all too soon for Prue and Rose, it was goodbye, with 6/1 to Rosalinde and Sue.

The second semi had powerful play from both pairs, with all four big hitters and steady.  But Katie and Sophie had the harder task, giving 15/ owe 30 every game to the Dutch pair (whose 60s handicap seemed mighty high to the dedans, given their talents).  And so it proved.  Though Katie’s serve saved many a point, and she and Sophie went for the dedans very successfully many times, Lucie and Kim went ahead from the start and stayed there, hitting everything and revelling in the situation.  Shouts of “Me! No, you!  No, me!” rang forth from Sophie, with variant “You! Me! You!” to give variety, but all the running and communication in the world couldn’t overcome the difficult handicap against them.  6/3 to Lucie and Kim who, quite rightly, looked very pleased with themselves.

The handicap difference in the Doubles final (played to best of 8) was a mere 5 points, and indeed there was a totally different pace of play, with the games ratcheting up more or less equally between Lucie and Kim on one side, and Rosalinde and Sue on the other.  One outstanding shot by Kim was a great get of the ball, right by the side of the grille , which then bounced into the dedans to win her the point….   Generally, Lucie and Kim were defending very well – Lucie in particular volleying any high balls into a corner; but one or two good serves from their opponents, Rosalinde and Sue, and the games were equal again.

Then drama: Rosalinde, whose jaunty walk and smiley face were very notable throughout the tournament, hit a ball off the back foot, lost her balance and crashed to the ground.  The dedans thought she’d hit her head on the wall, but this turned out not to be the case, and after a few minutes check-up, she seemed to be OK.  Then in a freaky accident, just hitting a ball for practice before play re-started, she hit her own leg and a large blood bruise swelled on her calf – another injury break of ten minutes to be iced and bandaged up.  Back on court (to applause) at 5/5, 40/30 to Kim and Lucie.  They took that game, but the momentum had gone; everyone - not surprisingly – was a bit tentative, and Rosalinde was not just hobbling a bit, but also shaking her racket wrist about.   Lucie and Kim closed it out to win the Doubles title 8/6. 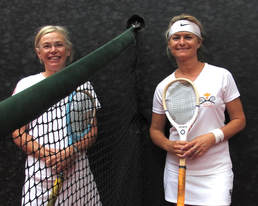 Pru McCahey and Kim van Boeckel, Plate finalists
Plates
The Plate Singles (played to 6, starting from love all) was won by Kim Van Boeckel playing Prue McCahey.  Again, Prue had to face a huge handicap against her, and the pressure seemed to get into her head, as she made a number of double faults (well, one serve ban the tambour…) which gifted her opponent a couple of games, so Kim, playing steadily and carefully, won 6/0.  Prue’s charming sportsmanship was an example to all.

The Plate Doubles (to six, starting love all) was won by the two Lindas, Linda Sheraton-Davies & Linda Fairbrother against Carolyn Armstrong-Smith & Sarah Sullivan.  Linda F. had finally got to grips with the Paris peculiarities and played something nearer her best game, particularly using her under-arm twist.  Linda S-D was steady and powerful and a fine tactician, using surprise short shots to great effect.  Carolyn and Sarah played a good steady game, and the points were close, but they were out-foxed.  Won by the two Lindas.

Huge thanks to the Paris Jeu de Paume Club, to Rod McNaughton for his marking (and Julian Sheraton-Davies and Ivan Semenoff, the club vice-president, as stand-in helpers), and to  Gil Kressmann, former Secretary of the French Committee, and Patricia Gallagher, for the photography and unflagging support. Thanks also to our generous sponsors Philippe Lette and (as always) the Hotel du Jeu de Paume.  Above all, to Gabrielle Smart-Fourquet whose (acquired) Gallic charm and competence made this tournament – as always – a joy for participants.  And we all went home with an orchid each! 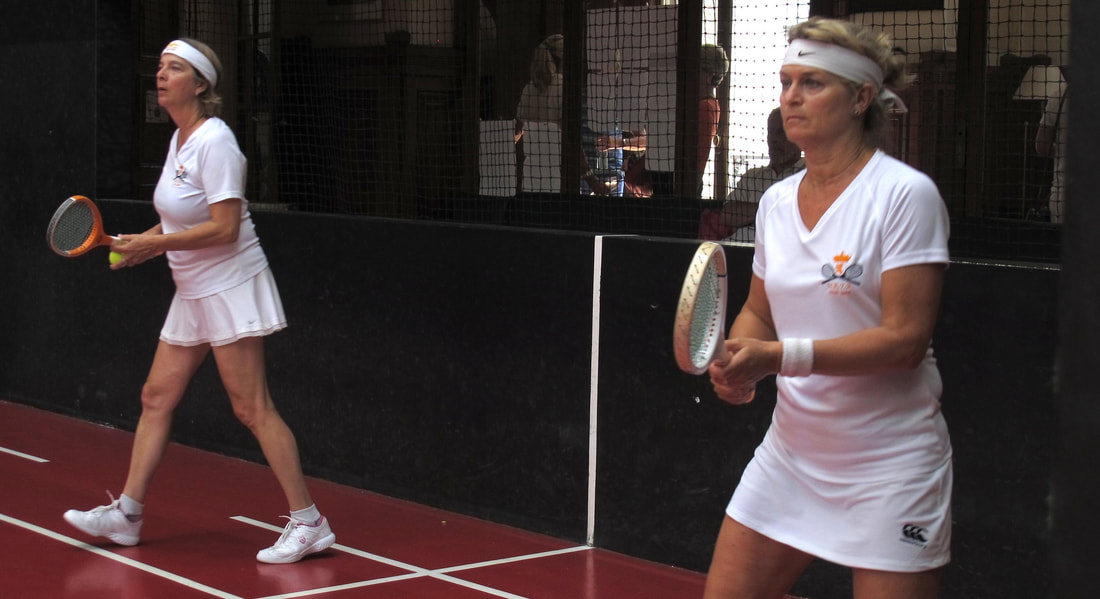