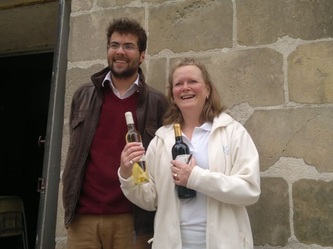 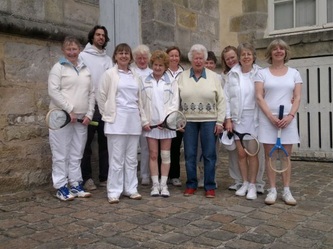 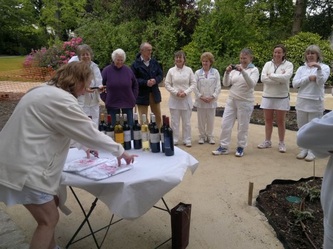 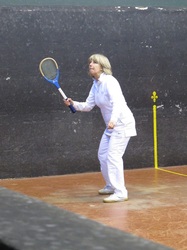 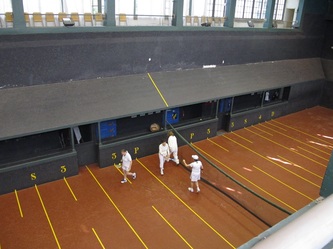 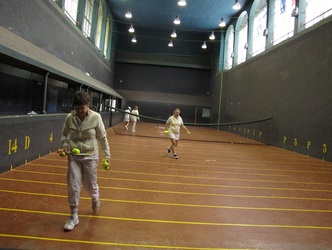 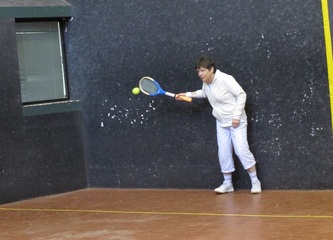 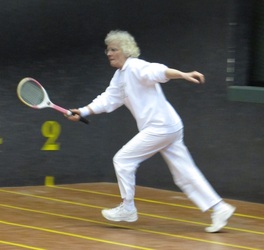 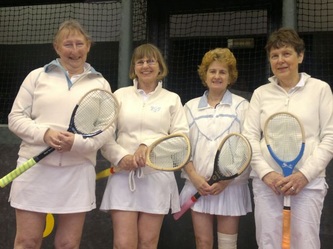 Results of the Round Robins 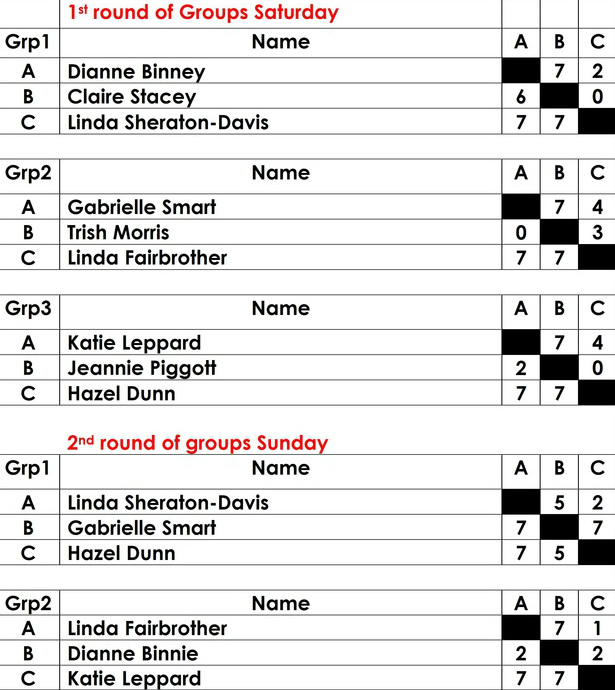 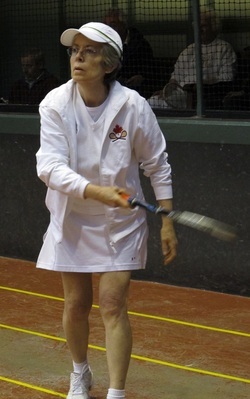 Diane Binnie in action
Last year we sweltered; this year we froze.  It wasn’t quite gloves and scarves on court at Fontainebleau, but the garden door from the dedans was kept firmly shut, even at lunchtime, to keep out the biting wind.  As the lights weren’t working off-court, this meant it was both cold and dark in a sort of Antarctic-hut way.  But spirits remained sunny, and by the final afternoon, we were able to venture out into the rhododendrons  for prize giving, fortified by a plate of delicious patisserie (and a wonderful dinner the night before).

The very first game showed the bulldog spirit that marked the tournament.  Diane Binnie was up against Claire Stacey.  All looked plain sailing for Diane at 5/2, but then Claire settled and worked all the way up to 6 all, 40 all, match point.  With victory hovering in her grasp, Claire sent a mid-court shot into the net, to allow Diane to scrape through at the last gasp, 7/6.

Other games of note included  the match between Linda Fairbrother and Trish Morris, when Linda managed four double faults.  Luckily for her she was finding tight corners for the ground strokes, so eventually won 7/3.   Trish had another difficult match against Gabrielle Smart, who was obviously anxious to get the timing back on track after a previous long game. Trish played a good solid game, but Gabrielle polished her off with great length of serve, and some seriously weighty ground strokes, winning 7/0.  Jeanie Piggott won the (non-existent) prize for most successful Have-A-Go shot, when in her match with Katie Leppard she was attacking Chase 4 (feet).  She valiantly swung at the ball to try a force for the dedans, which missed the net but hit the lip, spun down, and landed Chase 2.  Brilliant!

However, a superb effort by Hazel Dunn against Katie was the premier match of this first set of round robins.  Hazel was returning everything Katie could throw at her, including some superb pickups of Katie’s railroad serve.  Under pressure, Katie began to make errors, and Hazel moved apparently effortlessly to 5/0.  Then at last Katie’s game began to click, and helped by some great forces to the dedans, she moved to 4/5.  Hazel  stopped the rot with a force of her own to beat Chase 4: 6/4 to Hazel – could she hold on to close the match?  Indeed she could, with three clear points, including one to the grille.  Then a change of ends with Chase 2nd gallery, polished off with ease by Hazel to win 7/4.

So six players – winners and runners-up – went through to the next round robins to determine the two finalists.  The remaining players went into the Plate. 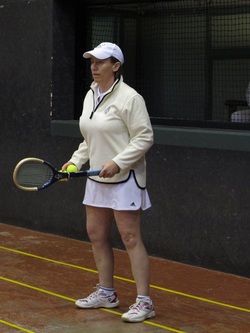 Katie Leppard
The first match on Day Two in the second level of Round Robins was the best so far – Gabrielle Smart defending her Singles title against Linda Sheraton-Davis, with 5 points in Gabrielle’s favour.  Gabrielle’s very first shot showed her desire to keep the tricoleur flying:  a return of serve into the backhand service corner for Chase 3 (feet, of course, not yards).   The rhythm then settled into a game of long tactical rests, with neither making errors and both serving well.   So all was level up to 5 all, with nothing in it.  Then Gabrielle edged ahead to make it 6/5, and was serving for the match.  Two good serves helped her to 40/0, with a Hazard chase.  Linda missed her first serve, and Gabrielle happily attacked the second serve to win 7/5.

Linda Sheraton-Davis then took on Hazel Dunn, giving 15/0we 30.  And she had a hard time against that handicap given that Hazel was finding excellent high wall serves, and also slamming backhands into corners.  Not until she was 4/1 down did Linda look as if she would find her mojo, with two good serves and a whizzing backhand of her own.  But Hazel responded with two strong ground strokes of her own, and slammed the door shut again, to go ahead 5/1 and then 6/1.  Now it was Linda’s last gasp, hitting everything back somehow, until she had game point, but with a change of ends had to attack Chase 4.  Linda sent one lob down – returned; another lob, again returned; but the third was too much for Hazel and Linda got herself another game 2/6.  But it only delayed the inevitable, and two errors by Linda brought the score to 40/owe 30, chase 12.  Hazel wins 7/2.

In the final game of this round robin, it looked as if Hazel would do it again as she moved ahead to 5/3 with once again a fine display of retrieving and tricky serving.  But then she began to look tired and Gabrielle moved in with low shots into the corners and tambour.  Gabrielle leveled at 5 all, and then moved on to win 7/5.  So from the first round robin group, Gabrielle went through to the final.

In the second group, the first match was between Linda Fairbrother and Diane Binnie, with Linda giving 15/0we15.   There was too much power in Linda’s ground strokes, made more difficult after the first two or three games by them landing in the corners as well.  Diane was very steady in returning serve, but couldn’t maintain the rests.  However she did perfect the dedans shot ‘just slipping in off the bounce’, which she managed four times, and two in a row in one game.  But to no avail: Linda won 7/2.

Against Katie, Diane met a similar fate.  Diane won the first game, but after that a pattern emerged of a belter ground stroke from Katie, countered with a high lob from Diane, which she couldn’t maintain for more than two or three shots.  Katie moved ahead, and though Diane was getting back many difficult powerful shots, Katie nearly always had the last word.  The only glimmer of hope came when Katie at 6/1 gave her a present of three double faults in a row!   Diane must have had her fingers and toes crossed that this might continue.  But alas for her, despite one further double in the next game, Katie held her nerve and took the match 7/2.

So then it was between Linda Fairbrother and Katie to settle which would go through.  Basically the story of this match was Annihilation.   Katie’s serve had finally found its groove on the big court, and she rained down a succession of railroads: in the nick, bounce to the left, bounce to the right, shoot out into the court….   Linda was unable to play her usual game of aiming deep into the corners, and indeed slammed most returns straight into the net.  The service end was no better for her, as Katie cheerfully and efficiently dispatched a succession of forces into the dedans.  She waltzed away with a superb win 7/1, to be the other singles finalist. 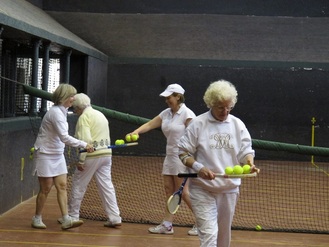 Jeannie, Sheilagh, Katie and Claire
In the Singles final, (first to eight), which would triumph;  the power of the railroad or the cunning of the redhead?  At first, Katie’s serve seemed to have gone off the boil again, and she even did a few sidewall serves, which the dedans agreed was a rare sight indeed.  Gabrielle meanwhile was working the backhand corners (reverse , of course, to take account of Katie being a leftie).  All moved on level for the first games, up to 3 all.  Then Katie began to get a better length on her ground strokes, which weren’t popping up so much, and even caught the nick rather too many times for Gabrielle’s comfort.  Games were going to 40 all, but Gabrielle was just losing those vital game points, as the score moved to 6/3 to Katie.  Gabrielle now started her own, very effective, railroads, and took the next game.  But in the next, Katie sent a force into the dedans and then Gabrielle gifted her a double fault.  It was now 7/4 to Katie, and she appeared to be enjoying herself.  She laid two chases, won the next two points with ease, and then Gabrielle lost the next chase and the match, 8/4.

Katie and Sheilagh then met the two Lindas: Fairbrother and Sheraton-Davis, who had 8 points against them.  Linda coped well with Katie’s serves, and sent them firing into the backhand corner.  Sheilagh was down the court at the service end, so Katie had to skip around, but the precision of both Lindas in aiming into empty spaces was too much to defend against.    The Lindas went through.

The other pairs contesting to be in the final were Gabrielle with Diane against Trish and Hazel.  Hazel began by hitting belters off Gabrielle’s serve whenever she got the chance, while her partner Trish was sending up high balls that gave Diane great trouble in returning.  Games started slipping away from Gabrielle and Diane.  Hazel and Trish made no errors to help them, and Hazel’s backhand became, if possible, even better.  They went through 7/1. 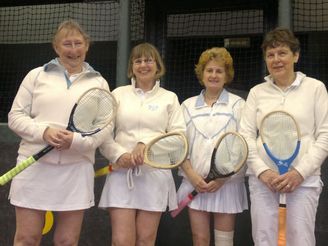 Hazel, Linda F, Linda S-D and Trish
In the Doubles final (like the singles, to best of 8), the two Lindas played Hazel Dunn and Trish Morris, with the Lindas giving 8 points again.  The Lindas made a slow start, while their opponents came out on fire and made the most of their points advantage to go ahead 2/0.  But then the Lindas settled down, began to serve better, and put pressure on Trish’s back hand in particular.  Back to level at 4/4.  By now Linda Sheraton-Davis’ volleys were finding the back of the court, and Linda Fairbrother’s low ground strokes were hitting the backhand corner sweetly.  From now on, not only did Hazel and Trish win no more games, they did not win any more points as Eric the marker pointed out afterwards.  So the two Lindas swept on to win the Doubles title 8/4.

In the Plate final between Trish Morris and Jeannie Pigott,  Trish’s serve won her most of her points.  However hard Jeannie tried, that ball just did something strange at the last moment, and even when she did get it back, it was with a defensive  shot that Trish then attacked with steady strong ground strokes.  Trish won the Plate competition 7/1. 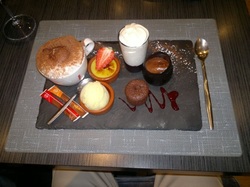 The mini puddings
It was all great fun, and despite the weather the group had their usual taste of La Belle France – literally so, with 3 good dinners.  The official group dinner was particularly delicious, especially the spectacular array of mini puddings on a slate platter, from gooey chocolate cake to apple sorbet.

Our thanks to the Fontainebleau club for their hospitality, to Eric Delloye the professional for his marking (plus, of course, the spouses who  took over a few matches to give him a rest), to the Hotel Jeu de Paume for their prize donation, and above all to Gabrielle Smart who, as always, took on the whole task of arranging the venue, the finances, the dinner, and the playing.  And this year didn’t even have the solace of winning the Singles, though she certainly did her damnedest!