​sponsored by the Jesters

Many thanks to Owen Saunders for the photos 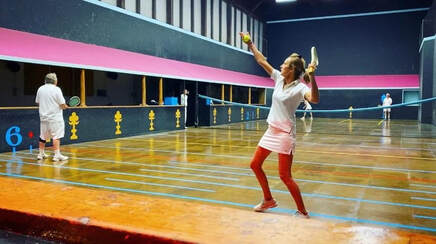 Sue Haswell serving to Alex Brodie. Simon Mansfield at Chase 6 and Julian Stafford by the grille
Hatfield House Real Tennis Club hosted the UK’s premiere Mixed Doubles Tournament, the Billy Ross Skinner, with the top 12 available female players participating from clubs across the country.  As with previous years, there was a full weekend of tennis starting with the Group Stages on the Friday concluding on the Sunday with the finals.

With 3 groups of 4 battling to make it through the group stages on Friday and Saturday, the finals days began early on Sunday with the quarter finals.  Despite driving winds and rain all participants arrived safe and sound and play commenced.  Early doors Sophie Dannreuther and Nick Brodie made quick work of progressing to the semi finals followed by Alex Brodie and Julian Stafford.  In the other half of the draw Sue Haswell and Simon Mansfield were joined by Louise Mercier and Simon Talbot Williams.

At this point, all the semi-finalists had played 4, 3-set matches to reach the semis so stamina and concentration were key.  The first semi-final went the full distance with Alex Brodie and Julian Stafford making certain of their place in the final despite a 6/0 loss in the second set.  They finally prevailed with a 6/5 0/6 6/4 victory.  Sue Haswell, a former winner, and her playing partner Simon Mansfield, put on a commanding performance beating Louise Mercier and Simon Talbot Williams 6/2 6/2.
A full viewing gallery next witnessed a final which did not disappoint.  Alex Brodie and Julian started strongly with Alex hitting her trademark volleys with deadly power and accuracy.  This was countered by Sue Haswell’s shot selection and consistency.  Simon and Julian very much playing their part in this hard fought contest.  The first set going to Sue and Simon 6/4, the second set was even closer with Sue and Simon taking it 6/5 and ultimately the victory.

This tournament is always well attended by spectators and is supported by the club members who help organise and run the event.  Breakfast, lunch and supper are provided throughout to keep the players well fuelled and the professional team are at hand throughout.

This tournament would not be possible without our generous sponsors the Jesters and the Dedanists.  The Jesters made a significant contribution to the cost of the tournament which is greatly appreciated.  The Dedanists’ contribution ensures that all sub 24 year old players are fully supported and encouraged to play at the highest level both now and in the future.