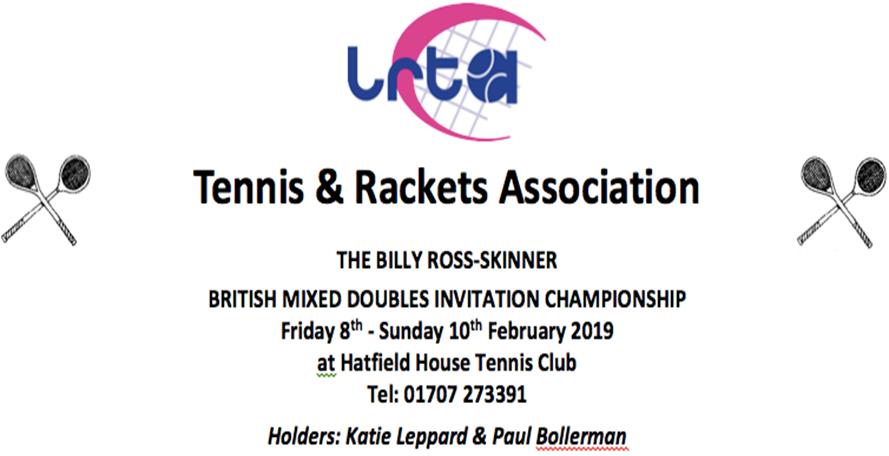 Many thanks to Owen Saunders for the photos 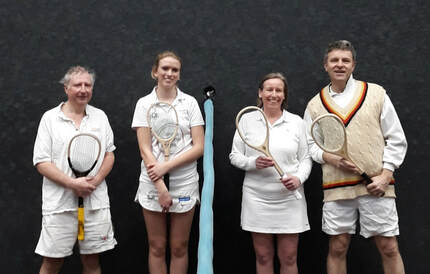 Fred Satow, Natalie Barber, Katie Leppard and Simon Talbot-Williams before the final
Hatfield House Tennis Club once again hosted the Billy Ross-Skinner Invitational Mixed Doubles tournament over the weekend of the 8th/9th/10th of February and as is always the case with this tournament it provided some very close matches and some excellent tennis

The event is an invitational event for the best 16 ladies available, paired up with 16 men of a suitable standard to give each pair an even chance of winning the title and as ever that was very much the case.

On the Friday the two strongest pairs to proceed looked to be Jill Newby & Owen Saunders who managed 2 wins out of 2 and Clare Bucknell & Jonathan Fisher who also managed a 100% record and without dropping a set to take their place in the Quarter-Finals on Sunday.  They were joined there by Sue Bicheno & Geoffrey Russell and Sophie Dannreuther & Steve Brewerton, who managed to make it through via the repechage system which allows you one loss but means you have to win 2 out of 3 potential matches.

On the Saturday, the first group saw some incredibly close matches, none more so than Nicola Doble & Alistair Hunter beating Amy Pye & Nick Brodie 6/5 in the deciding set to make it 2 wins out of 2.  Amy and Nick though also rightly made it through to the Quarter-Finals via the repechage.  Sadly, the afternoon group was a pair light as one pair had to drop out earlier in the week, leaving us with 3 pairs to play a round robin group, with the top 2 pairs going through to the Quarter-Finals.  This proved to be an exceptionally tough group with both last year’s winners Katie Leppard and Paul Bollerman in it, although split up this year to avoid a repeat.  It was Katie who came out the better of the 2 with her partner Simon Talbot-Williams, as they managed to sneak through as runners-up in the group courtesy of a 5/6 6/4 6/5 win over Paul and his partner Sian Medlow.  Group winners were Natalie Barber and Fred Satow who won both their very tight matches without dropping a set. 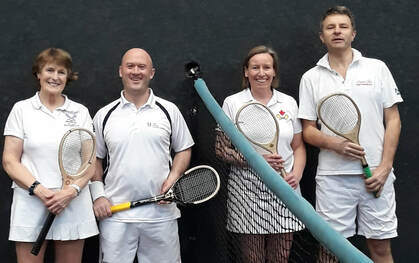 Semi-finalists Jill Newby, Owen Saunders, Katie Leppard and Simon Talbot-Williams
The Sunday would show that the final group on the Saturday, despite only being 3 pairs, really was the group of death as it was the 2 pairs to proceed from there that would go on to contest the final.  Both had one incredibly tight win and one relatively comfortable win on the way to the final as Natalie and Fred just snuck through an incredibly tight 3 set match with Sophie Dannreuther & Steve Brewerton 3/6 6/4 6/5, before a relatively comfortable Semi-Final against Nicola Doble & Alistair Hunter 6/0 6/3, who themselves had also had an epic Quarter-Final win 3/6 6/5 6/4 over Sue Bicheno & Geoffrey Russell.

Katie & Simon had their easier win first, beating Clare Bucknell & Jonathan Fisher 6/1 6/0 and playing almost faultless tennis along the way, giving Clare and Jonathan no chance.  In the Semi-Final though they had a much tougher time, despite a very strong first set which they won 6/1 against Jill Newby & Owen Saunders.  Jill and Owen though changed which server they took in the second set and that very much changed the dynamic of the match and they managed to sneak it 6/5 to set up a deciding set.  The final set was very tight but Katie & Simon held their nerve to close it out 6/4 and set up a rematch in the final with Natalie & Fred.

Natalie & Fred had won the group match 6/5 6/5 so maybe started as slight favourites but it was Katie & Simon who hit the ground running, as they were clearly out for revenge and as they had done in their Quarter-Final match, they played near faultless tennis, Simon controlling things on serve and return of serve and Katie making some incredible defensive volleys at the galleries and some amazing retrieval shots at the hazard end.  Natalie & Fred did nothing wrong and made a great fight of it but ultimately went down 6/2 6/3, although the score really doesn’t do them justice.

Huge thanks as always to Viv Dawes for her excellent organisation and pairing up of the teams, in what is her last year organising the tournament.  It is an incredibly difficult task to match the pairs up so well but once again, all the incredibly tight matches just goes to show what an amazing job she has done.  Thanks also to Hatfield for hosting the event, Liz Fisher, Sarah Sullivan and Jackie Sherman who took care of the catering and the Hatfield Pros for all their efforts with the marking.​
Jon & Viv Dawes
Return to top of page