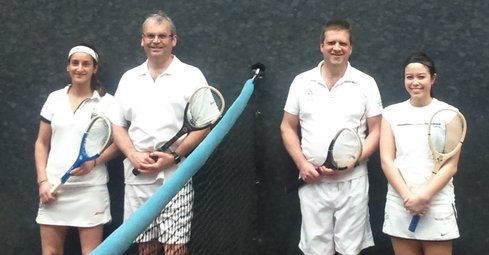 Semi-finalists Alex Brodie & David Barnes and Ed Popplewell & Izzy Hunt
​Hatfield House Tennis Club once again hosted the Billy Ross-Skinner British Mixed Doubles tournament, sponsored by Neptune Investment Management, over the weekend of the 10th/11th/12th of February and as in previous years there were some incredibly close and entertaining matches.

The event is an invitational event for the best 16 ladies available, paired up with 16 men of a suitable standard to give each pair an even chance of winning the title and, as is always the case, most of the matches were very close battles.

Things hadn’t started well when on the Thursday two of the top ranking ladies had to pull out due to illness and injury, both of whom were in the first group on Friday morning which left the other two pairs to move serenely through to the knock-out stage on Sunday.  Luckily no other groups were affected and all had some great tennis on show.  The early front runners were Helen-Frances Pilkington & Anthony Jenks who won through their group for the loss of only 3 games and Sara Metherell & George Foxall who won a fantastic match against another strong pair Izzy Hunt & Ed Popplewell 6/5 6/5 to take their place in the Quarter-Final.  Thanks to the format though Hunt & Popplewell had another chance to get through and they certainly took it, storming through that match and then on to the semi-final.

In the first semi-final Hunt & Popplewell took on the all Hatfield pair of Alex Brodie & David Barnes in what turned out to be a topsy-turvy match.  The first set flew by in a flash with Hunt & Popplewell cruising it 6/0 and everyone thought it was going to be very quick but the Hatfield players had other ideas and narrowly took the second set 6/5 with the crowd now getting fully involved in proceedings.  With the final set starting 3/3 it was nip and tuck all the way with both men beginning to look visibly tired but eventually Hunt & Popplewell prevailed taking the deciding set 6/4 to take their spot in the final. 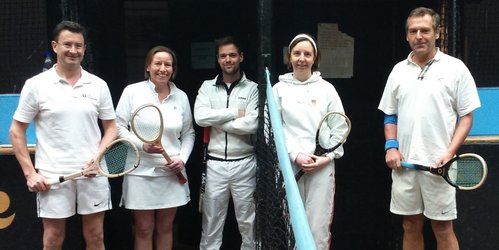 The final was another hard fought battle with all players playing some excellent tennis with the volleying and retrieving of the ladies particularly impressive as it had been throughout the event.  There was never more than two games between the pairs in the first set with Hunt & Popplewell eventually claiming it 6/5 and this was to prove crucial as this time they got up in the second set too and never looked back, finally securing it 6/3 to win the tournament at the first attempt for either player.

Huge thanks as always to Viv Dawes for her excellent organisation and pairing up of the teams.  Thanks also to Hatfield for hosting the event, Liz Fisher and her excellent team who took care of the catering and the Hatfield Pros for all their efforts with the marking.  And, of course, many thanks to our generous sponsors Neptune Investment Management.

Jon & Viv Dawes
Many thanks to Owen Saunders for all the photographs.
Return to top of page