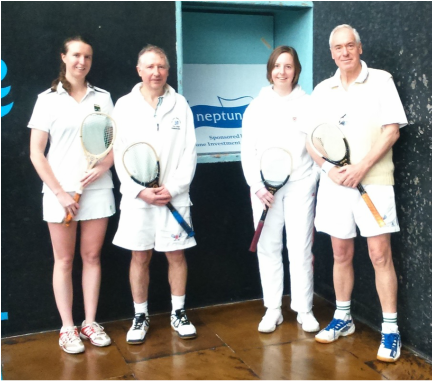 Isabel Candy, Fred Satow, Helen-Frances Pilkington and Bernard Wetherill before the final
Many thanks to Owen Saunders for all the photographs.

Hatfield House Tennis Club once again hosted the Billy Ross-Skinner British Mixed Doubles tournament, sponsored by Neptune Investment Management, over the weekend of the 12th/13th/14th of February and as is always the case it was another very entertaining tournament for competitors and spectators.

The event is an invitational event for the best 16 ladies available, paired up with 16 men of a suitable standard to give each pair an even chance of winning the title and, as with previous years, the pairings were very well matched as nearly half of the 32 matches went to a deciding set. 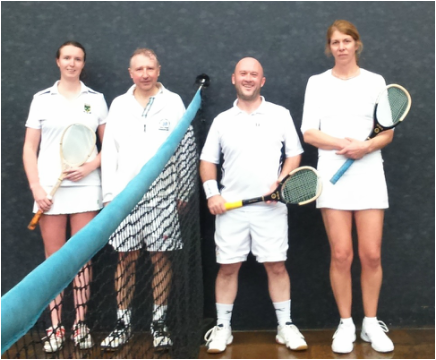 One of the form pairs from the group stage was Elli Harris of Oxford and Nick Brodie of Hatfield, so it was very sad when Nick was unable to make it back to the Club on the Sunday having been up all night with a particularly nasty stomach bug given to him by his lovely daughter.  Who knows what could have been, but it allowed Caroline Janes of Holyport and Owen Saunders RTC to go through to the Semi-Final where they met Fred Satow and Isabel Candy both also RTC.  It turned out to be another incredibly tight affair which swung one way and then the other but finally Satow and Candy won through to the Final 2/6 6/4 6/4.  In the Final they would meet yet another RTC pair in Bernard Weatherill and Helen-Francis Pilkington, who themselves won through a very tight Semi-Final 3/6 6/4 6/4 against Anthony Jenks of Queens Club and Candida Nicholls of The Oratory School. 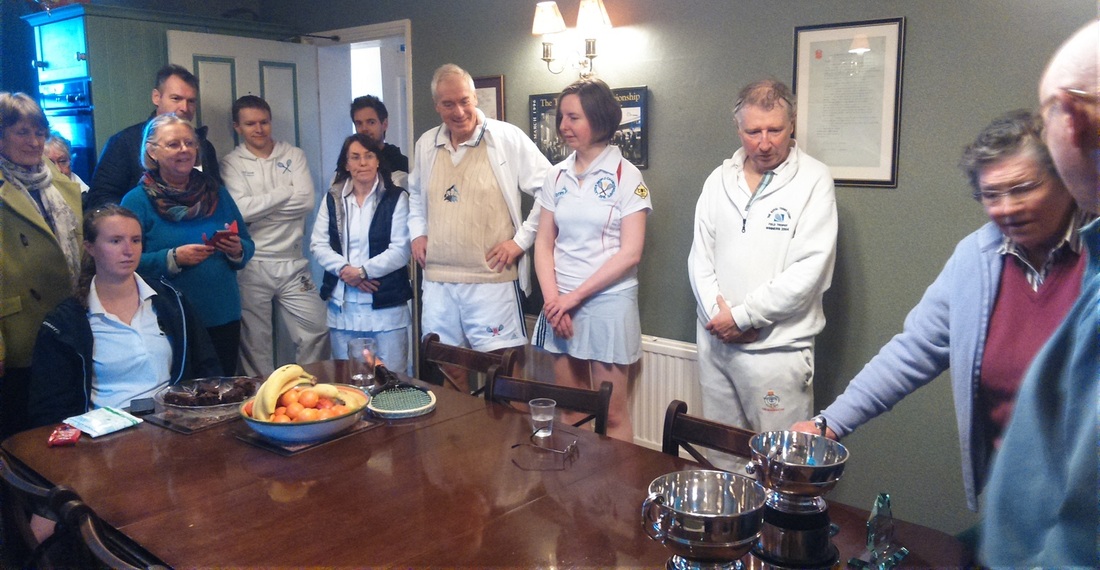 ​The tone seemed to have been set from those matches that whoever lost the first set went on to win the match and amazingly the Final followed the same pattern.  In the all RTC Final Fred Satow and Isabel Candy took the first set with almost faultless tennis and thanks to one or two uncharacteristic mistakes from Bernard Weatherill 6/4.  The second set was a very different story though as Bernard cut out the mistakes and started to control things and his partner Helen-Francis played superbly at the front of the court, cutting out anything in range taking the set 6/1 and then managed to maintain the momentum through the deciding set 6/4 to clinch a very well deserved title.

Huge thanks as always to Viv Dawes for her excellent organisation and pairing up of the teams and to Sheila Macintosh, who herself ran the event faultlessly for many years, who came along to lend a hand.  Thanks also to Hatfield for hosting the event, Liz Fisher and her excellent team who took care of the catering and the Hatfield Pros for all their efforts with the marking.