Second semi-finalists Anthony Jenks, Helen-Frances Pilkington, Nicola Doble and Jamie Bingham
Many thanks to Owen Saunders for all the photographs.

Nick Abelson, Freddy Adam, Sue Haswell & David Pimblett
Hatfield House Tennis Club once again hosted the Billy Ross-Skinner Invitation British Mixed Doubles tournament, sponsored by Neptune Investment Management, over the weekend of the 13th/14th/15th of February and as with each of the previous years it was another closely fought, well contested event.

This is an invitational event for the best 16 ladies available, paired up with 16 men of a suitable standard to give each pair an even chance of winning the title.  The top lady player was World No. 4 Sue Haswell (RTC) playing with David Pimblett (Cambridge) and they managed to progress to the Semi-Final stage where they narrowly missed out 6/1 1/6 6/4 to Freddy Adam (Oxford) and Nick Abelson (MCC).  It was a very strange match with Freddy and Nick dominating the first set only for Sue and David to switch receivers at the start of the 2nd set and run through that set 6/1 to level the match up.  The final set started at 3/3 and after the first 2 games were shared Freddy and Nick finally managed to close it out 6/4.

Earlier on in the day Freddy and Nick had beaten Steve Brewerton and Catherine Walker (both Hatfield) 3/6 6/3 6/5 in a fantastically close battle while Sue and David had come through slightly more easily 6/3 6/5 against Maggie Henderson-Tew (Radley) and Simon Edmond (RTC) although they did have to mount a comeback from 2/5 down in the second set. 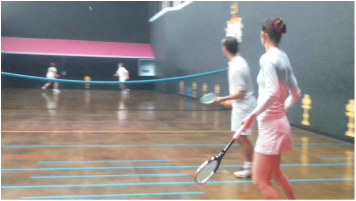 Jamie Bingham and Nicola Doble at the service end
The second Semi-Final was between Helen-Frances Pikington (RTC) & Anthony Jenks (Queens) and Nicola Doble (RTC) & Jamie Bingham (Holyport).  Both pairs had come through their groups with 2 wins out of 2 and Nicola and Jamie were in the strong position of being the only pair to reach the Semi-Final without dropping a set, having beaten Elvira Campione (RTC) & Julian Stafford (Cambridge) 6/2 6/5 in their Quarter-Final.  Helen-Frances and Anthony had a much tougher Semi-Final finally overcoming Alex Garside (Seacourt) and Owen Saunders (RTC) 1/6 6/2 6/5 having been 40 all in the final game before Anthony managed to set a ½ yard chase.  Sadly their good fortune seemed to have run out in the Semi-Final where Nicola and Jamie continued their ruthless form and never looked in any great trouble running out 6/3 6/0 winners to take their place in the final having still failed to drop a set. 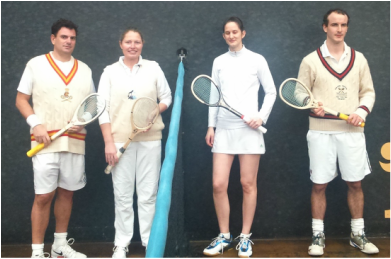 Nick Abelson, Freddy Adam, Nicola Doble & Jamie Bingham
Their fine form up to the Final made Nicola and Jamie strong favourites and it seemed as though they would live up to the tag by storming through the first set 6/3.  Freddy and Nick had other ideas though and noticeably raised their game in the second set and powered back to take the set 6/2 and take the match to a much deserved final set.  This was the first set that Nicola and Jamie had dropped and it proved not to be the last as Freddy and Nick kept up the momentum to close out the match 6/4 and take the coveted new trophies away with them.  The standard of the tennis throughout the event had been superb but some of the rallies in the final were played at such blistering pace it was difficult for the crowd to keep up.  Great credit must go to all four players for a terrific match where all played their part.

Thanks must go to Viv Dawes for her fantastic organisation, pairing up everyone to great effect, Jon Dawes and James Law for their faultless marking throughout and to the Hatfield ladies Jo Hunter & Liz Fisher and their support staff for the wonderful food provided throughout the event.  Thank you to Stuart Rose for presenting the prizes and finally, thank you very much to Neptune Investment Management for their kind sponsorship.
Jon Dawes & Viv Dawes
Return to top of page