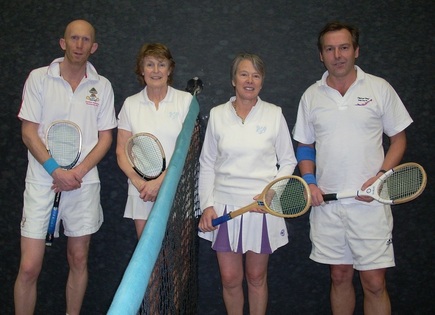 The Finalists: Nick Brodie, Jill Newby, Sara Reston and Anthony Jenks
Hatfield House Tennis Club once again hosted the Billy Ross-Skinner British Mixed Doubles tournament, sponsored by Neptune Investment Management, over the weekend of the 1st/2nd/3rd of February and as with each of the previous years it was another closely fought, well contested event.

This year the event was limited to the best 16 ladies available, paired up with 16 men of a suitable standard to give each pair an even chance of winning the title.  Sadly as this year the event clashed with the Field Trophy and Pol Roger Semi-Finals, some of the top players were not available, so the combined handicaps of the pairs was slightly higher than usual but happily this did not show on the court as the standard of play was as high as always.  The top lady player was World No. 4 Sue Haswell (RTC) playing with Chris Davies (Queens) and despite losing their first match, they progressed to the Quarter Finals through the repechage system to face 2 debutants in the event Alex Kurkjian (Queens) and Jon Conway (Prested).  It was a very competitive match and ultimately hinged on the vital 5/5 game in the first set.  Haswell & Davies closed it out 6/5 and then went on to take the 2nd set 6/2. 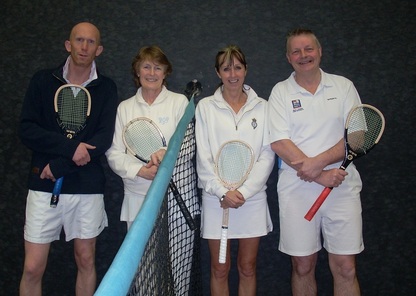 Semi-finalists: Nick Brodie, Jill Newby, Sue Haswell and Chris Davies
In the Semi-Final Haswell & Davies would go on to meet Jill Newby (Holyport) & Nick Brodie (Hatfield) who produced a very solid display storming through 6/1 6/4 against Alex Garside (Seacourt) & Simon Mansfield (Queens) although the second set was a very tight tussle, with some excellent tennis from all four players.  By this stage Newby & Brodie were in brutal form and they powered through 6/2 6/3 to take their place in the final.

Also making it to the Quarter-Finals were Sara Reston (Fontainebleau) and Anthony Jenks (Queens) who had won their section fairly comfortably, although they had shown some skill at getting to 4-0 up only to allow their opponents to catch right up.  They took on Sarah Metherell (Queens) and Andrew Mountain (Manchester) who had won through with 2 very close 3 sets matches to take their place but sadly found Reston and Jenks too strong and succumbed 6/2 6/1. 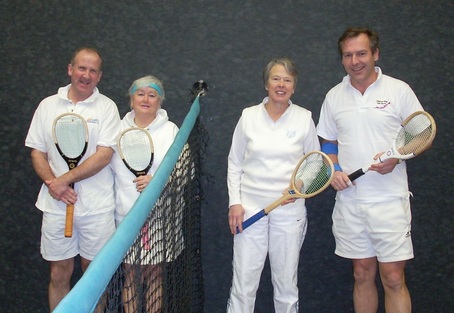 Semi-finalists: Andrew Petrie, Pam Tomalin, Sara Reston and Anthony Jenks
Sadly the final Quarter-Final between Ellie Harris (Oxford) and Geoffrey Russell (RTC) and Pam Tomalin (Oratory) & Andrew Petrie (Cambridge) didn’t take place so Tomalin & Petrie took their place in the Semi-Final against Reston & Jenks.  This was a high powered game with both men thumping the ball around and both ladies playing some great defensive tennis and using very astute tactics.  The first set went to Reston & Jenks 6/2 but at 5/3 to Tomalin & Petrie in the second set it looked as though we were destined for a decider.  However Reston & Jenks clawed their way back and took the next 3, very closely fought games, to book their place in the final.

The final of Newby & Brodie against Reston & Jenks was an absolute classic and the tightest Billy Ross Skinner final that Hatfield has seen in a long time.  There was never more than 2 games between the pairs and all 4 players were playing really well and contributing to a great game.  Almost inevitably both sets came down to 5/5 40/40 but it was Newby & Brodie who managed to win both the vital points and take home the trophies.


Thanks must go to Viv Dawes for her organisation and to the Hatfield ladies, Liz Fisher, Sarah Sullivan and their support staff for the wonderful food provided throughout the event.  All the players really enjoy playing at Hatfield as the members make them feel so welcome and the pro’s Jon Dawes and Ben Matthews look after everyone really well.  Thanks to Jon, Ben and Liz for ensuring everyone left the club feeling they had had a super time and were looking forward to next year when the tournament will be held two weeks later to avoid the clash with the Pol Roger and Field Trophy semi finals.

Report from Viv and Jon Dawes
Return to top of page