sponsored by the Handpicked Collection 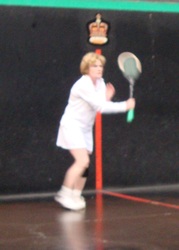 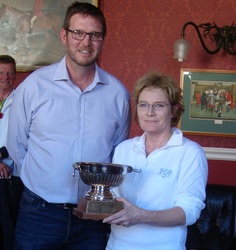 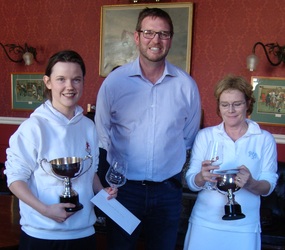 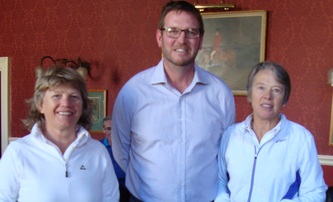 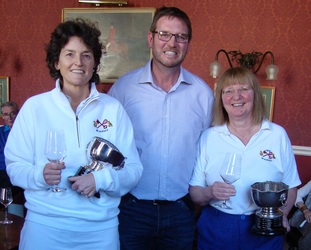 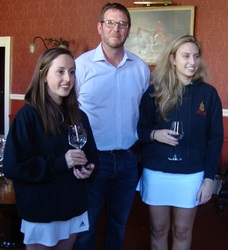 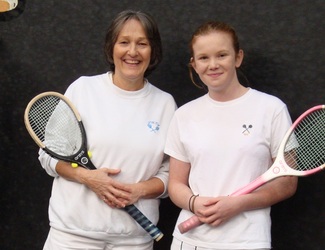 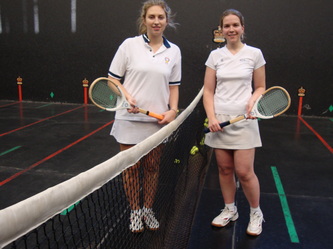 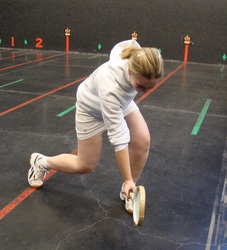 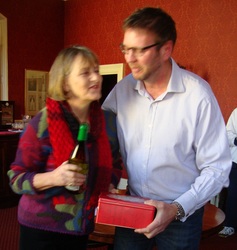 Our apologies about the lack of captions but I am advised that the Child Protection Policy prevents us not only from naming any juniors but also from providing any hints as to which of the photos are of the juniors.

Return to top of page
Division 1 Singles and Doubles

Three round robin groups battled it out on the Saturday, to see who would progress to the knock-out stage.

In the first group, after some close matches, Katie Leppard and Gabrielle Smart got through.  The second group saw Ann Skelhorne hold her nerve to win two of her matches from 5/5, 40/40 cliffhangers!  She went through, as did Lucy Hutchinson.  The final group was very tight, with Fiona Harrison just beating the hard-hitting Clare Warrell to go through with Sara Reston.

Then the knock-out stage began.  Gabrielle and Ann had a very close, hard fought match, with the former coming out on top; but Gabrielle was unable to continue her winning form in the semi-final, and lost to a determined Fiona.  Sara was too strong and consistent for Lucy and she then faced Katie in the other semi-final.  This was a match of effective serves and excellent rests.  But Katie found the dedans with great frequency and won through to earn her place in the final.

So on Sunday, Katie Leppard faced Fiona Harrison for the Division 1 Singles title.  Fiona took the lead from the start, romping ahead to 4/1.  Katie was fighting hard with her strong serve and focused hard ground strokes to get the next two games; but Fiona was excellent at placing the ball in the corner on to Katie’s backhand.  Fiona kept up her dominant play, progressing to take the match 6/3.

In the Doubles, the two Lucys (Davies and Hutchinson) overcame Jacqui Watkins and Ann Skelhorne, but were unable to get the better of the consistent, controlled play of Tiff Fielden and Sara Reston, who went through to the final.  In the other half of the draw, Fiona Harrison and Clare Warrell faced Gabrielle Smart and Georgiana Seigneur in a hard fought match.  At 5/5 Fiona and Clare were 0/30 down, but held their nerve to go to 40/40 and then won the last point to book their place in the final.

So in the Doubles final, Tiff Fielden and Sara Reston faced a big handicap of Rec Half 30 to play their opponents Fiona Harrison and Clare Warrell.  All four players had strong ground shots, but the match was all about not making any mistakes.  Sara delivered very precise shots low across the net to the bottom of the tambour, while Tiff wowed the dedans with her consistent cut shots.  But Fiona and Clare took full advantage of the big handicap in their favour, returning everything and making it difficult for their opponents to get a grip on the score.  The beginning of the match was closely fought, but then Fiona and Clare consistently worked through the games, winning the Division 1 title 6/2.

As with Division 1, three round robin groups started on Saturday.

In the first group, it was a ‘youth v experience’ split.  Needless to say, youth triumphed, in the shape of Felicity Sargent, who won all her matches, and Phillippa Twohig-Howell.  Their opponents did their best:  Margaret Jones showed great determination and refused to capitulate lightly, while Janet Peach gave Felicity a hard time with good serving and looked very strong.  But Felicity ran for everything and after an excellent volley into the Winning Gallery, Janet found it hard to hold on.  The nail-biter was between the two youngsters, who both placed the balls tightly in the corners and made full use of the dedans, with few mistakes from either.  At 5/5, it was Felicity who concentrated hard to take the match 6/5 and win the group.

In the second group all four players had very similar handicaps as the final result showed.  Charlotte Barker won her first two matches against Angela Probyn and Trish Morris, but Candida Nicholls turned the tables in their match.  Candida kept Charlotte moving and played to her backhand to reduce the number of tambour shots that Charlotte liked to display.  Trish Morris then put Candida in her place by winning their match 6/5.  So three people having won 2 matches, the final result was decided on games, making Candida the winner and Charlotte runner-up.

In the third group, Caroline Dixon dominated her fellow players with a strong left-handed serve that caught the nick more often than they’d have liked.  Having seen off Katy Weston and Doris Siedentopf fairly easily, she faced Rebecca Kashti who made a valiant effort to come back from 3/6 down to 5/5.  But that railroad did its job once more and Caroline came through with a clean score-sheet to win the group.  Doris was runner-up, defeating Katy in a neck-and-neck match that went to 5/5.  She also beat her doubles partner Rebecca in a very even match with many fine rests.  Award for the ‘Hand of God’ shot went to Rebecca in her match against Katy, when she was robbed of a Winning Gallery point when the ball ricocheted off the corner of the gallery to shoot backwards and land as a Hazard Chase worse than the Second!

On Sunday in the knock-out competition, first up Charlotte Barker took on Phillippa Twohig-Howell, getting an early lead of 4/1.  But then both players started to lay chases of better than a yard and Phillippa stayed calm to level at 5/5.  Charlotte delivered 3 high serves and some excellent length to win 6/5.  Doris Siedentopf made no mistakes and was in stunning form with her cross-court drives from the Hazard end; she won 6/3 against Candida Nicholls.

In the first semi-final, Felicity Sargent and Doris had a closely fought match, with neither player taking a definitive lead and both demonstrating great consistency and nerves of steel.  Felicity showed great maturity while Doris mesmerized the spectators with her turn of speed at crucial moments.  Eventually Felicity’s calm approach to each point in turn ensured she took the final game 6/5.

In the second semi, Charlotte Barker coped very well with Caroline Dixon’s tricky left-handed serve at first, but once Caroline slowed their pace she had more trouble.  Charlotte responded with slow serves of her own to Caroline’s backhand, but as in the first round, when she found herself 40/40, Caroline drove the ball straight in to the dedans and was 5/2 up.  Charlotte rallied and took the score to 5/4, but Caroline proved too consistently strong and went through 6/4.

In the Division 2 Singles final, Felicity took the first two games and just kept hitting everything back, making very few mistakes and kept lots of shots low over the net.  Caroline came into her own in the third game, and her strong serves started to challenge Felicity.  As the match progressed, Caroline laid better chases and tightened up her game, which pushed Felicity into some mistakes.  So Caroline went on to take the match decisively 6/3.

In the Doubles competition, Caroline Dixon’s  fiendish serve, linked with Charlotte Barker’s accurate zooming in to the tambour, kept all the opposing pairs very much on their toes.  Doris Seidentopf and Rebecca Kashti also impressed with their strong ground strokes and Doris’ excellent volleys.  By the semi-final stage, it was Doris and Rebecca against Katy Weston and Sallie Blanks and once again accurate and strong volleying by Doris coupled with precise serving by Rebecca gave them the victory 6/1.

In the second semi, Charlotte and Caroline faced the youngsters Phillippa Twohig-Howell and Hattie Shearman in a hard-fought battle.  Caroline displayed some fine judgement when defending chases and her assertive cries of: ‘Leave it!’ rang into the dedans.  She and Charlotte delivered precise shots to the tambour and the deadly serve kept their opponents on their toes; and Hattie again demonstrated her consistent ground strokes and ability to return virtually everything.  They won 6/4.

In the Division 2 doubles final, then, Phillippa and Hattie met Doris and Rebecca.  There was great volleying from both pairs, and Rebecca produced her best serves of the weekend just at the right time.  Phillippa was aiming at the dedans, but Doris and Rebecca were returning everything and stormed ahead to 5/1.  In the next game, Rebecca and Doris were 40/0 down and gave the spectators a nail-biting time as they worked up to 40 all.  But they could not win the next point, so Hattie and Phillippa closed the gap to 2/5.  However, that was it, as Rebecca and Doris focused hard on the next game to take the match 6/2 and retain their title.  Phillippa and Hattie deserve great credit for remaining calm and professional throughout.

Report by Candida Nicholls with Angela Probyn and Trish Morris

As always at Leamington, a highlight of the weekend was the delicious dinner held at the Club, attended by the Chairs of Leamington and Moreton Morrell, Guy Stanton and Sir Andrew Hamilton.  So we are very grateful to Charlotte Rickett who organised it.

Our thanks also to the two clubs and their members  for letting us use the courts over the weekend; also to the professionals Kevin, Marc, Tom and Nick  for marking, and to the generosity of the sponsors without whom the tournament could not go ahead: The Handpicked Collection.  Finally, a huge thank you to the Tournament organizers – Katy Weston, Lucy Hutchinson and Sarah McGivern who worked extremely hard to make it all happen so enjoyably.


Edited by Linda Faribrother
Return to top of page