​Supported by an Anonymous donor

Many thanks to Linda Fairbrother for the photos 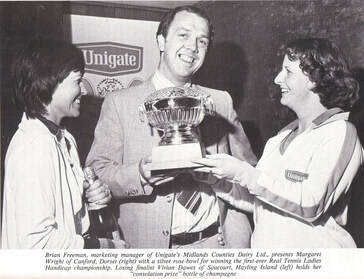 ​​Let us take you back to 1980! That was the year that the Ladies British Handicap Championships was first ever held. This is a picture of the winner, Margaret Wright with none other than our amazing Membership Secretary, Viv Dawes who was runner up that year. And as for the chap from Unigate looking dreamily into the distance, anyone would think he won the trophy - he doesn't look like he wanted to give it away!

How far we have come since then. 39 years on and the same tournament is still going strong and was as successful as ever this last weekend.

Linda Fairbrother, our fabulous fixtures secretary has sent us the following report with the results:

"36 players, from 13 different Clubs with a range of ages from 13 years old to ...well, that would be telling but certainly quite a few decades further on.  The LRTA Ladies Handicaps have moved to Prested and it was a splendid success.

Each entrant had at least six one-set matches, strictly timed to 30 minutes exactly, so quite a few players were saved by the bell at 40 all in the last game. The strict timing wasn’t popular with many, but with 92 matches to get through, it was a necessary limit.

A new name and a well-known name battled it out for the Division 1 Singles – Ali Kirkwood from The Oratory beat Candida Nicholls 6/4 in a fiercely close match.  In Division 2, a similar picture with Savannah Poolman losing to newcomer Megan Hawkey in an all-Prested affair which went to the wire, with 5 games all, 40 all, and a dream Chase laid by Megan – one yard.

The Div 2 Doubles was also won by Megan with another newcomer, Jacqueline Siu from Cambridge, beating Kim Walker and Ali Kirkwood (another bit of silver for her). And Division 1 saw Candida get her hands on a trophy having been denied the Singles title, playing with oh-so-strong Amy Pye.  They defeated Charlotte Barker and Zuzana Botkova 6/1.

Altogether a good weekend for Prested players, who managed to win four out of six of the titles, putting their local knowledge of the famous glass wall on Court 1 to good use."

It was a huge gathering of friends old and new at Prested, with the club making us feel extremely welcome.  We had over 50 people for the tournament dinner on Saturday night and were delighted not only to have our French friends over for the tournament, but also some young and promising players and others who had travelled a good distance.

Away from the tennis there was plenty of other entertainment on offer at the club with many getting stuck in to some Padel sessions (inspired by Claire Fahey's bronze medal win at the European Championships!), table tennis, swimming and spa treatments.

Congratulations to all the winners, congratulations to our new tournament committee who worked extremely hard to ensure everything went as planned and finally a big thank you to everyone who took part.  Roll on the next one!
Return to top of page